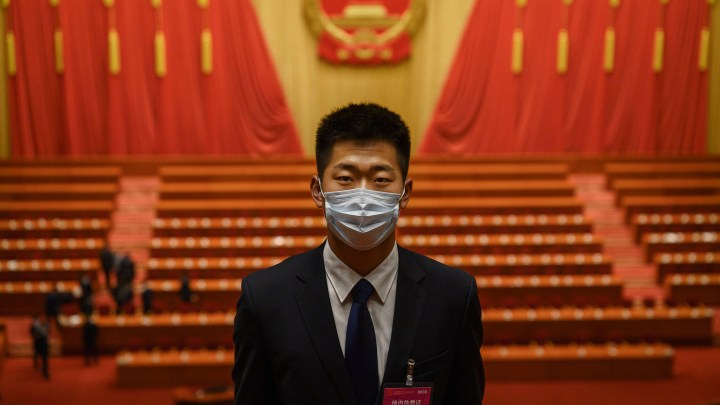 COPY
A security guard wears a protective mask as he stands after the opening of the National People's Congress at the Great Hall of the People on May 22, 2020 in Beijing, China. Kevin Frayer/Getty Images

A security guard wears a protective mask as he stands after the opening of the National People's Congress at the Great Hall of the People on May 22, 2020 in Beijing, China. Kevin Frayer/Getty Images
Listen Now

Hong Kong pro-democracy lawmakers sharply criticized China’s move to take over long-stalled efforts to enact national security legislation in the semi-autonomous territory, saying it goes against the “one country, two systems” framework in which Beijing promised the city freedoms not found on the mainland.

The proposed bill, submitted Friday on the opening day of China’s national legislative session, is aimed at forbidding secessionist and subversive activity, as well as foreign interference and terrorism. It comes after months of pro-democracy demonstrations last year that at times descended into violence between police and protesters.

The bill, one of the most controversial items on the agenda of the National People’s Congress in years, drew strong rebukes from the U.S. government and rights groups. Despite that, Beijing appears to have lost patience and is determined to assert greater control in Hong Kong and limit opposition activity following last year’s protests.

Wang Chen, vice chairman of the National People’s Congress, said the protests and violence in Hong Kong had challenged the “one country, two systems” principle and the aim of the legislation was to stop any behavior that posed potential security threats.

Wang said Hong Kong’s legal system and enforcement must be established and improved “at the state level” to “change the long-lasting situation of defenselessness in the national security affairs in Hong Kong.”

A previous effort to pass such legislation in Hong Kong’s legislature was shelved after massive street protests in 2003. This time, Beijing has decided to circumvent the territory’s lawmaking body using what critics say are dubious legal grounds under the Basic Law, which has served as a sort of constitution for Hong Kong since its return to China from British colonial rule in 1997.

A return of violent protests would be a further drag on the territory’s creaking economy, prompting multinational companies to reconsider their presence and Washington to review its policy of granting Hong Kong more advantageous trade conditions than mainland China, Tsang said.

Hong Kong’s main stock market index fell 5.6% on news of the bill. Other Asian markets also declined due to concern about U.S.-Chinese tension, but none by such a wide margin.

Hong Kong chief executive Carrie Lam said in a statement that the national security law “will not affect the legitimate rights and freedoms enjoyed by Hong Kong residents under the law, or the independent judicial power, including that of final adjudication, exercised by the Judiciary in Hong Kong.”

Also making news in the National People’s Congress: Chinese Premier Li Keqiang has broken from tradition and did not announce an economic growth target. Some analysts say setting a growth target sets a tone that the country needs to grow at all costs.

In the past, that has meant local officials who want to get promoted or want to keep their jobs have ignored environmental protection rules or even made up data to meet tough growth goals.

The central government has set other metrics, though, like unemployment, for example. In cities, that should be capped at 6%, although The Economist Intelligence Unit anticipates it will be more like 10%. This time next year, the Communist Party will likely declare victory in meeting its targets — the question will be, how were they achieved?

Keqiang has reiterated that China will honor the phase one trade deal with the United States that was struck in January, which is to buy more American goods at an extra $200 billion more. The pandemic throws into question whether or not this is still possible, and whether or not other this will come at a cost to other countries. Other nations are also currently looking to the Chinese economy, as it’s one of the first to restart after the pandemic hit.

With reporting from Marketplace’s Jennifer Pak