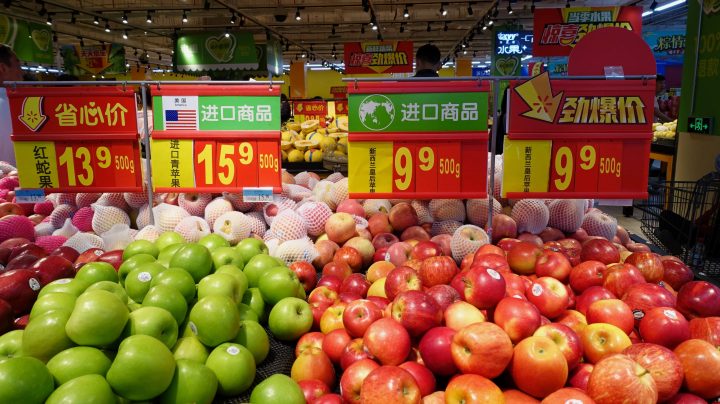 COPY
American green apples at a Shanghai supermarket were among the first to be subject to Chinese counter tariffs. Charles Zhang/Marketplace
Trade showdown

American green apples at a Shanghai supermarket were among the first to be subject to Chinese counter tariffs. Charles Zhang/Marketplace
Listen Now

It’s never been easy to get Chinese citizens on the streets of Shanghai to speak to the foreign media, but since the start of the U.S.-China trade tensions nearly two years ago it has become even more challenging.

Economics is now among the many topics that can get citizens in trouble with the Chinese authorities. When the Marketplace team approached one man for comment on the U.S. and China’s phase one trade deal on Jan. 15, he tried to speed past.

The ones who are willing to speak to Marketplace often only give only their surnames or their English names, which are not usually registered with the Chinese authorities.

“I haven’t paid much attention to the trade deal,” said office secretary Lynn Lin. She’s not the only one. Coverage of the U.S.-China trade tensions have been muted in China’s state press.

U.S. officials have announced a few more details, saying that the Trump administration will not escalate tariffs on Chinese goods further and even reduce a portion of duties by half. According to the U.S. trade representative fact sheet on the deal, China will make “substantial” purchases of at least $200 billion more over the next two years, though this has not been confirmed by Chinese officials.

Retiree Fan Changxin said he heard that the trade deal is a success.

“As long as China doesn’t get the short end of the stick, then any trade deal is okay,” Fan said.

However, there shouldn’t be a focus on which side gains more from this one agreement, according to Tu Xinquan, the head of the China Institute for WTO Studies at the University of International Business and Economics in Beijing.

“We have to look at the overall U.S.-China relationship in the past 40 years, and Chinese people have gained a lot,” he said.

“This is a major turning point because President Donald Trump really likes to add tariffs,” Tu said. “The fact that he’s cutting back on some tariffs is an important factor to stabilize U.S.-China trade relations.”

The U.S. media also reported that China agreed to buy at least $40 billion dollars’ worth of U.S. agricultural goods annually for the next two years, which would be double what the Chinese bought from the U.S. in 2017 at $19.6 billion, before the trade tensions.

While none of those details have been confirmed by Chinese authorities, some analysts are concerned by them.

“[China] has never really bought that much agricultural products in the past. Are they going to be able to?”

Business groups have an extensive list of structural and regulatory changes they’d like to see, which may not all be covered under the phase one trade deal.

“The subsidies for state-owned enterprises, the industrial policy, restrictions on data flow across borders. Those kinds of issues are where we’d like to see coverage,” said Matthew Margulies, the vice president of China operations with the U.S.-China Business Council.

“For agricultural companies it is getting products approved in the market faster, it is getting better intellectual property rights protection [and] a lot of the stuff that was raised in the Section 301 investigation,”

Section 301 is the rule dealing with unfair barriers to U.S. trade. It is the Trump administration’s justification for retaliating against China and leveling the playing field. But not many Chinese citizens who spoke to Marketplace said they buy that argument.

“The U.S. is bullying China. Trump started with Huawei and has been trying to break the Chinese economy to maintain American hegemony,” he said.

Zhang said China can survive without the U.S. That kind of talk scares analysts like Kedl, who said there are many U.S. firms still interested in entering the Chinese market.

“The phase one deal is a baby step on the way to building trust but so much trust has been destroyed over the past two years, I’m very pessimistic about a phase two deal,” he said.

If the trade tensions drag on, some Chinese citizens said they will back China’s government to take a tough stance on the U.S.

The Chinese government has imposed counter-tariffs on almost all American exports coming into the country, but products like U.S. beef, whiskey and almonds are premium products for Chinese families. There are many foreign alternatives to American goods in Shanghai.

“China is now a strong power, it does not need to give in to the U.S.,” said a man smoking outside the 30,000-square-foot Starbucks Reserve Roastery in central Shanghai. He has been buying only Chinese-made products to support China and urges his fellow citizens to do the same.

“If only the Chinese can all boycott American products, [then] the impact of the trade war on China will be limited.”

He told Marketplace his surname, Sun, but before he could say his full name, a colleague interrupted him.

“Stop recording!” she yelled, after hearing Marketplace is an American media outlet. She pulled Mr Sun away. It seems even expressing support for China in front of the foreign media is seen as dangerous. 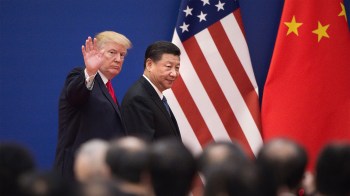