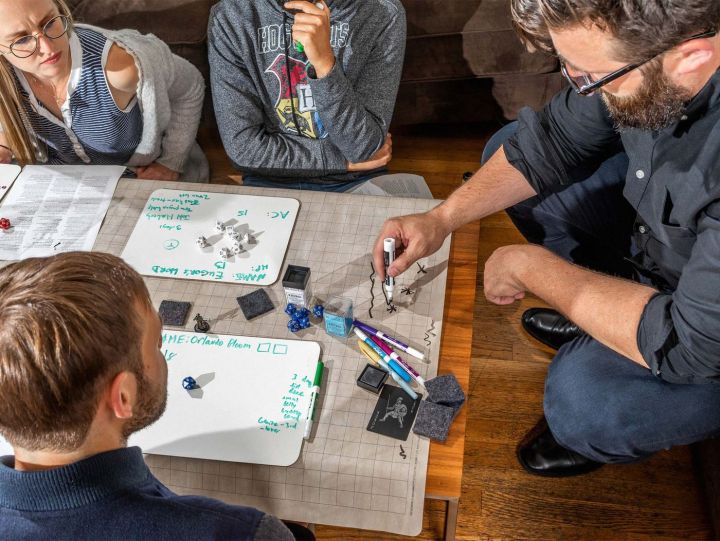 Dungeons & Dragons is not the same game it was 40 years ago. And not just because rule updates have made the game less fussy and easier to play. The game, which kicked off the role-playing genre in the 1970s, is actually popular.

Role-playing games like D&D are different from traditional board games. Instead of a fixed set of objectives, D&D is modular. It lets players create their own adventurers and solve quests created by another player — the dungeon master. That person is responsible for coming up with the story, acting out nonplayer characters and running behind-the-scenes mechanics.

And with 40 million D&D players, there’s a growing need for dungeon masters, or DMs. Some voice actors and playwrights are turning to D&D as a source of income. High-end DMs charge up to $500 per session, according to Mary Pilon, who wrote about professional dungeon masters for Bloomberg Businessweek.

“Until a few years ago, the idea of engaging a professional dungeon master … would have seemed absurd,” she wrote. “Demand, paid or unpaid, was relatively anemic.”

David Brancaccio recently spoke to Pilon. The following is an edited transcript of their conversation.

Brancaccio: What does a dungeon master do?

Pilon: A dungeon master in the game of Dungeons & Dragons is the person who leads the campaign. They’re kind of like the storyteller-in-chief. So they are running the arc of the plot that the characters are navigating through the whole game.

Brancaccio:  Typically, if you don’t hire a professional for this, someone just gets picked?

Pilon: Exactly. So for years and years and years, when D&D was being played, your dungeon master was the friend who was good at telling stories. You may have paid them in beer or pizza, depending on your age. And it kind of ended at that. It was very informal. The idea of it being professionalized is very new.

Brancaccio: And so people do this now for at least a supplemental living?

Brancaccio: But you say it’s a lot of work. It’s not trivial.

Pilon: It depends. One of the things that’s happened with D&D now is because of streaming services like Twitch, people can see the game being played before they even pick up a rulebook. But that’s also had the effect of raising the bar for what a good dungeon master does. So now you see professional voice actors getting into this, people with playwriting backgrounds.

If someone’s doing a first-time campaign for someone and teaching the basics, that’s a lot easier than, say, creating a really elaborate plot for more advanced players. A lot of dungeon masters I talked to said that they will spend hours and hours and hours preparing before a campaign. And a campaign could last for two to four hours or could go on for months, if not years.

Pilon: Exactly. And I think the young professional crowd is kind of a bread and butter across the different cities where I looked at this. I’m actually a good example of this. You play D&D maybe as a kid. It’s nerdy. It’s kind of a quiet thing you do. You’re a little embarrassed by it. You go off to college. You start your career. And now it’s having this huge renaissance, and it’s just simply easier. It used to be you had to go get the things you needed to play it a niche game store. Now you can buy them online or at Target. All these big-box retailers are selling these sets that used to be really hard to find.

And what I found so funny about this story is that in the ’80s, and even in the ’90s, there was a moral panic around Dungeons & Dragons. People thought it was satanic, and you had a lot of people protesting it. Now you talk to parents, they’re so excited their kids want to put their phones down and play a game that’s cooperative, that promotes team building, that fosters imagination and creativity.

Brancaccio: You liked the feeling of being kind of submerged in this 3-D storytelling space. What was it?

Pilon: I think it’s super fun. I think all games play a really interesting role for all of us, because they give us a venue in which we can be unlike what we are in normal life. There’s a huge fantasy element. For example, I was the shrimp in my family. I was the youngest kid. But in D&D, I could be an ogre, and I could slay things, and I had some power. It was a chance I actually had to beat my older brother at something, and I think with kids, that’s so potent. I think now more than ever, if we can’t pitch escapism now, I don’t know when we can. I think that that’s a really powerful force for people playing any game, but particularly, one as fantastical as D&D.