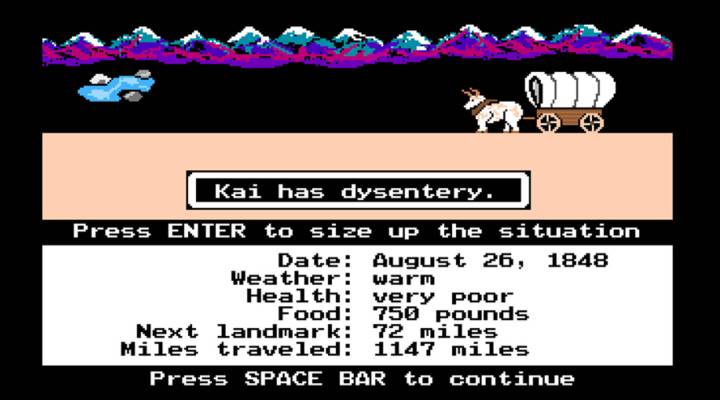 A screenshot from the Apple II version of "Oregon Trail." Poor Kai.  Screenshot via the Internet Archive
Make Me Smart With Kai and Molly

A screenshot from the Apple II version of "Oregon Trail." Poor Kai.  Screenshot via the Internet Archive

Microsoft is making a bid at educational video games this week with “Minecraft: Education Edition,” using the best-selling sandbox game it acquired in a $2.5 billion deal to teach kids how to code. It’s part of a suite of educational software the company announced this week on our podcast Make Me Smart.

“Minecraft” joins the decadeslong legacy of educational video games with “Math Blaster,” “Reader Rabbit,” “Where in the World Is Carmen Sandiego?” and, of course, “Oregon Trail.” The frontier role-playing game, crafted by three Minnesota teachers in the 1970s, sold more than 65 million copies and became a computer lab staple throughout the ’80s and ’90s before jumping to iOS and Facebook in the 21st century. It’s so iconic for millennial/Gen X cusps, that they’ve dubbed themselves “The Oregon Trail Generation” and the New York Times opinion section even aped it to illustrate voter suppression last year. The game went through several iterations before petering out in the early 2000s, but classroom versions and lesson plans inspired by the game are commonplace.

For all those hours fording rivers and trading wagon wheels for bison meat, what did “Oregon Trail” actually teach? That’s less clear.

“Oregon Trail” started as a “Dungeons and Dragons”-style board game, crafted by Minneapolis history teacher Don Rawitsch. It put the player in charge of a wagon party travelling 2,000 miles from Independence, Missouri, to Oregon’s Willamette Valley in the 19th century. According to a history of the game in City Pages, Rawitsch’s roommates and fellow teachers, Bill Heinemann and Paul Dillenberger, helped turn the board game into a simple text-based computer game for his western expansion unit. A few years later, the program rolled out to schools in the state. The advent of the Apple II brought the game into more classrooms with better graphics and more historical detail. That’s the version most people remember, and thanks to the Internet Archive you can play it online, for free, right here.

For San Diego tech worker Cedar Coleman, “Oregon Trail” was an integral part of his schooling in Portland. When his grade school class learned about the history of the state, groups of three or four kids would huddle around the classroom computer and take turns playing the game.

“Dying of dysentery in the game kind of underscored what we heard about in the lessons,” he said. “That a lot of people didn’t make it on the journey, especially kids that would get sick or starve in a really rough winter.”

Coleman’s class even took a field trip to a museum out of town that they had first seen in the game.

But much like history books, an educational video game isn’t free of bias or politics. Making a history lesson immersive can teach the wrong lessons super efficiently, teacher and Rethinking Schools editor Bill Bigelow wrote an in-depth critique of “Oregon Trail” in the mid-’90s. In the essay, which you can read in full here, Bigelow compares the game to writings of actual frontier families and found it erased or vastly downplayed the real-life role of women, slaves and native Americans in western expansion.

Today, Bigelow still has reservations about the way the game sanded off the edges of frontier life and forced the player to take on a white male’s perspective.

‘There were never any options to hurt anybody else. Violence was not allowed,” he said. “In some ways, that could be seen as a good thing, but … it makes it appear that this was very benign, just traveling across the country, you know, cutting down a tree, fording rivers and all that kind of stuff. But in fact there was racism, there was violence.”

Los Angeles author and podcaster Sarah Enni wiled away hours playing “Oregon Trail” and reading “Little House on the Prairie” in grade school, but she didn’t get the broader cultural context until much later. Now she puts the game in the same category as cuddly, anachronistic deceptions of Christopher Columbus and the pioneers.

“Looking back on the types of activities we did around Thanksgiving in elementary school and how radically different that that’s treated today,” she said, “I do think that I got sort of very typical American-dream-Manifest-Destiny-type of education.”

Put another way, by PBS’s online series “Game/Show,” “Oregon Trail Lied to You.”

But because “Oregon Trail” evolved with personal computing, it held all kinds of other lessons for the students that grew up on it. Students who played the game in the ’90s were some of the first to learn basic computer literacy without being consumed by the internet from an early age. In illustrating systems and data like weather, rations and pace of travel, PBS notes, “Oregon Trail” served as some kids’ first exposure to computer science.

By teaching kids to code, “Minecraft” is picking up that baton in a way more suited to our times. But who’s going to teach today’s grade-schoolers what a wagon tongue is?