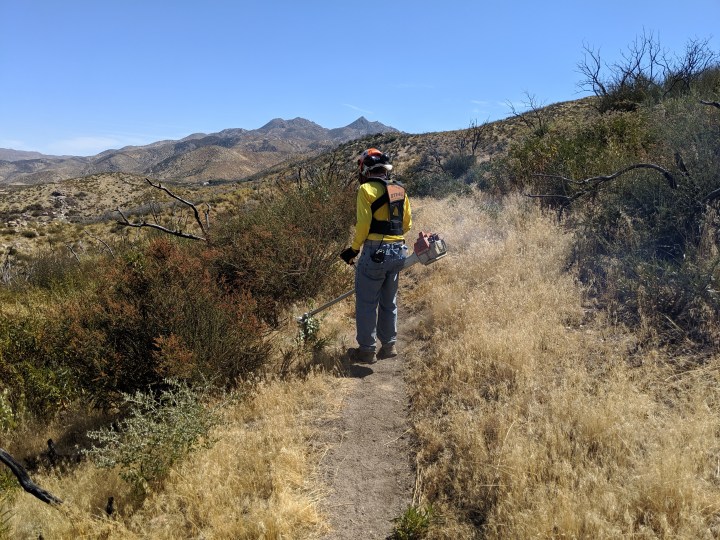 Like U.S. roads, bridges, dams and other infrastructure, public lands have their own backlog of needed repairs. According to a Congressional Research Service report published earlier this year, the National Park Service and U.S. Forest Service have almost $20 billion in unmet maintenance needs between them.

The challenge of keeping up the parks and trails that millions of Americans walk, hike and camp in each year has been exacerbated by wildfires. Federal agencies have had to divert significant resources to fight fires that have grown in frequency and severity, with the situation likely to worsen due to continued climate change. Between 1995 and 2015, the U.S. Forest Service reports it lost 40% of its nonfire staff.

But these agencies do have one advantage over other government entities when it comes to maintaining their assets: free labor. More than 300,000 people volunteered at the national parks last year, hosting campground sites, leading tours, performing maintenance and even providing security. The park service puts the value of that service at $179 million.

Similarly, the 30 nationally designated trails in the U.S. exist only because volunteers maintain them. Last year, volunteers donated more than a million hours of time to maintaining trails, at a value of $24 million.

The Pacific Crest Trail extends more than 2,600 miles from the Mexican border, through the California desert and mountains, Oregon and Washington, up to the Canadian border. While the land is mostly owned by the U.S. Forest Service along with a hodgepodge of other federal and state agencies, a nonprofit, the Pacific Crest Trail Association, manages the trail, fundraises for it and organizes volunteers.

On one hot September day about an hour outside of Los Angeles, a group of “Trail Gorillas,” as the volunteers call themselves, hiked more than a mile up the trail, holding specialized hoes and axes, and “Marketplace” followed them to find out just who are these volunteers that donate their time and keep the trails clear.

Tim Morris is the organizer for the Cajon Pass Chapter of volunteers. Most months, the group meets for a day of trail work. Morris hands out hard hats from the Forest Service and Pacific Crest Trail Association and then fills the bed of a pickup truck with the specialized tools, called Pulaskis and McCleods, named after Forest Service rangers who developed them for trail usage in the early 1900s. The truck also includes a long brush saw, which Morris will operate to clear overgrown vegetation from the trail.

“A lot of volunteers that come out here are a little surprised by how intense the work is,” said Morris. And to the group: “It’s hot, take as many breaks as you need. We’re just glad you’re out here.”

Morris is a retired bank trader who has hiked and backpacked since he was a child growing up in Germany and Spain. He’s hiked the entire trail and regularly hikes sections of it, including a six-day backpacking trip through the Sierras in July.

“This is how the PCT gets maintained,” Morris said. “Unfortunately the Forest Service and the other agencies we work with just don’t have the resources, so it relies on volunteers like you and us to take care of the trail.”

Morris has been volunteering on the trail for years, but since he retired three years ago, he’ll come out to work on the trail sometimes multiple times a week. Morris, Jim Banks and a few other older volunteers form the core group of regular volunteers.

But the group has taken a hit this year. Its previous, long-time leader died of cancer at the age of 60, and Banks said he and Morris are still adjusting.

“It’s really weird. It’s like we’re just waiting for him to come back, like he’s sick for a while and just coming back,” Banks said. “But that’s just not going to happen.”

Banks, Morris and the more experienced volunteers will take on more complex tasks. While Morris operates the saw, Banks looks for patches of trail that may need water bars to prevent erosion — he’ll use a hammer and small rocks from the area to build, essentially, tiny dams to divert the path flow of water when it rains later in the year.

But most of the crew are first-time volunteers, often much younger, who use the McCleods — a combination of hoe and rake — to smooth the trail into shape.

Lani Advokat is a counselor at an elementary school in Crenshaw, a low-income neighborhood in South Los Angeles, and a part-time yoga instructor. Unlike Morris, Advokat did not grow up hiking.

“My father and my brother still to this day still don’t understand me carrying my tent with me, don’t understand how you go to the bathroom,” said Advokat. “So I’m a bit of an odd one out in my family.”

In 2017, she quit her previous job at a high school to spend five months hiking the Pacific Crest Trail. Advokat said she’s been meaning to volunteer since.

“There’s a combination of wanting to give back to something that I feel really grateful to have been able to do,” Advokat said. “And also, giving back to the community.”

Even though hiking is by nature a lonely activity, the sense of community among the volunteers — most of them serious backpackers — is palpable. After a couple of hours of work, they take a break and sit in a semicircle, swapping trail stories. Advokat said she met her partner on the third day of hiking the Pacific Crest Trail.

Two other volunteers, Eva Raimondi and Adam Boland, explain how they met while hiking the Appalachian Trail. Boland describes how he had set out with little preparation, essentially on a dare. He bought a tent at a Walmart but didn’t know how to set it up. Then, during an afternoon snowstorm, he ran into Raimondi’s group.

“I got into my tent and he came hiking up,” Raimondi remembers. “And he didn’t know how to set a tent up, and he had the same one I had. And he was like, ‘Can you please help me?’ And I was in, like, my only dry set of clothes.”

After, Boland asked if he could tag along with her group.

Further down the path, Claudio Silva, a tool and dye maker, is stacking heavy rocks to support one vulnerable section of the path. He’s been coming out here for two decades and has “adopted” a 6-mile section of trail near his home. He’ll bring his adult and teenage sons to help him work on it during weekends.

Silva first began volunteering in 2000, after horseback riding on the trail — this is the rare section where that’s allowed. He said he’s been hooked ever since.

The number of Pacific Crest Trail volunteers has risen significantly just this decade. In 2012, about 1,700 people contributed time to maintaining the trail. Last year, the trail had more than 2,200 volunteers. Silva said that while the volunteers and their enthusiasm is vital to the trail, he’s concerned. The younger volunteers don’t return consistently.

“We need new blood, is what we need,” Silva said. “We have so many retired guys out here all the time, but we need people to take their spots someday.”