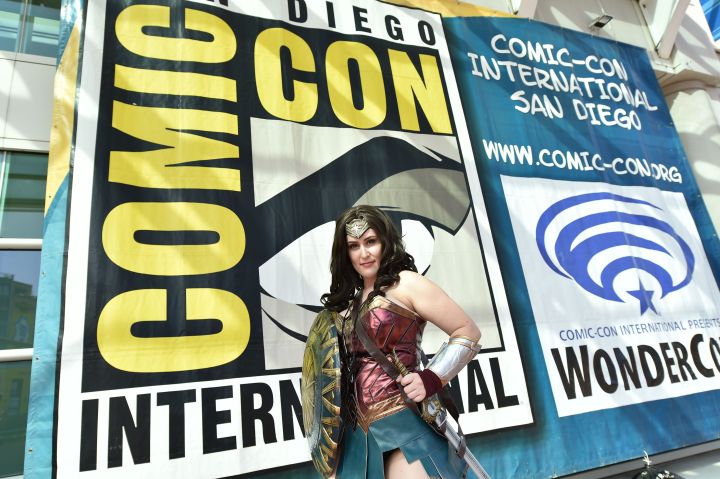 COPY
A cosplayer makes her way to the convention center during Comic-Con in San Diego, California, on Thursday. Photo by Chris Delmas/AFP

A cosplayer makes her way to the convention center during Comic-Con in San Diego, California, on Thursday. Photo by Chris Delmas/AFP
Listen Now

San Diego, California, plays host to its 50th Comic-Con this week. The convention celebrating comics, sci-fi and now all manner of entertainment is going stronger than ever. What started as an intimate gathering in 1970 has exploded into a massive pop culture extravaganza with a constellation of Hollywood’s biggest stars and crowds of more than 130,000 people spilling out of the convention center.

From cosplaying storm troopers and zombies, to chance encounters with cult comics artists, the magic of Comic-Con has drawn Dianne Garcia back for the past 15 years.

“It’s like a huge playground for adult nerds basically,” she said. But that playground has gotten a lot tougher to get into over the years.

“Pretty much the minute the convention is over you have to start planning for the next year,” she said. Tickets for the event sell out within an hour and hotel rooms are almost impossible to find. Garcia and her friends had to scramble for a place to crash after none of them were selected in a random lottery for nearby rooms.

“We really didn’t know where we were staying until last week, which is a little nerve-wracking,” she laughed.

The transformation of today’s Comic-Con would probably be unimaginable to those who gathered for the event in the early days, said Rob Salkowitz, author of “Comic-Con and the Business of Pop Culture.”

“From a basement of a hundred sweaty teenagers to turning the entire world into superhero fans, I would say that’s a pretty successful legacy,” he said.

Salkowitz has been attending for more than 20 years, and he remembers the moment he realized things had changed — a little more than a decade ago when he saw Paris Hilton and her phalanx of paparazzi.

But just as Hollywood has changed Comic-Con, Comic-Con has also changed Hollywood, said Henry Jenkins, a media scholar at the University of Southern California.

“I think it’s part of this bigger picture of Hollywood being driven by engagement more generally,” Jenkins said. “One of the measures of success in this new era is how much passionate fan following you get.”

And nowhere are the fans more passionate, vocal and organized than at Comic-Con, he said, where fan reaction can make or break a major studio project or push the industry to create content more reflective of audiences.

“When Hollywood comes there to meet its fans, it’s looking at a more diverse face of fandom,” he said. “Why do we suddenly have black mermaids and female Ghostbusters?”

It’s that sense of inclusion that keeps Dianne Garcia coming back, even as many of her purist friends have dropped out as the convention has become more mainstream.