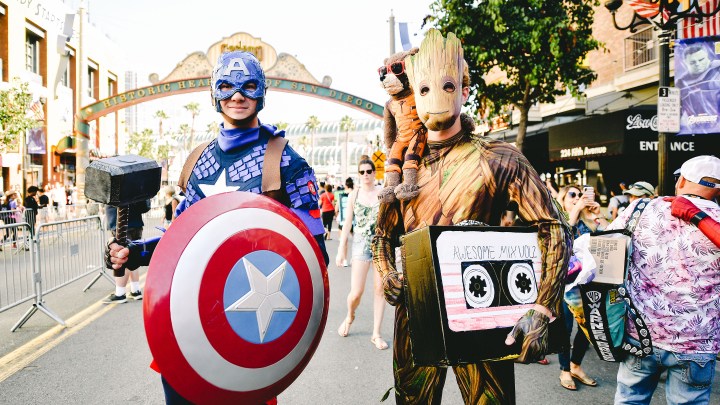 Organizers would normally be expecting around 130,000 fans from over 80 countries to attend. Of course, that’s not possible this year, because of COVID-19, so the entire festival has gone virtual.

That means there’ll be no fans in amazing costumes packing the San Diego Convention Center. Anyone can watch the panels and presentations for free, rather than having to compete to get an expensive day pass.

There also won’t be industry meetings.

“There’s a great deal of business that occurs the weekend of Comic-Con in San Diego,” said David Glanzer, the spokesperson for Comic-Con. “It’s different, but we’re trying to bring some of the stuff online. It’s a new experience for us, but we hope it’ll be as fun but in a virtual format.”

The convention organizers have posted a video featuring some of the volunteers and security staff that fans would usually see onsite.

“Hello everyone, so great to see you all,” it starts. “Please be careful when getting off the escalators, and from your security team, welcome to Comic-Con!”

Watching that, at home, alone, might be a letdown for some fans, but for others, like Samatha Nazario, it’s an opportunity. She lives in Brooklyn and couldn’t have afforded the flights and hotel to go in person. She’s looking forward to watching panels and events live online with her fan community.

“It’s super important, I especially think in these times, to be able to have that type of experience again, but to not limit it just to people who can afford it,” she said.

No people waiting in long lines to spend on food and merchandise means no income for vendors. Last year, 17,551 hot dogs were sold at the San Diego Convention Center.

Emily Hummel is one of four creators of “Con Rangers” — they usually sell merit badges at a booth. Dedicated convention goers can buy them for $6 a pop to mark accomplishments like bumping into a celebrity or making a new friend in line. This year, that might mean making a friend in a chat room while waiting for a livestream to start. The convention has created an online marketplace, but, for Hummel, it’s not quite like being there.

“It’s gutting to think that it’s not happening, and so I have to be like, ‘OK, well, at least we’re still going to have this little portion of it,'” Hummel said.

San Diego gets about $149 million in economic benefit from Comic-Con.

For the convention itself, making the online event free to anyone means a big financial hit. It had enough saved to weather this year, but the future is uncertain.

“We’ll know more, I assume, as the months progress and we find out what the situation is health-wise, nationally and globally, because right now still seems to be very much up in the air,” said Glanzer.

Comic-Con at Home runs through Sunday.