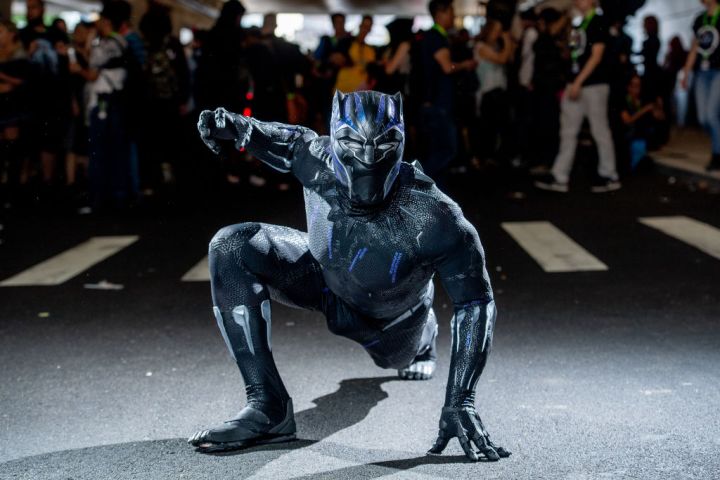 COPY
A fan cosplays as Black Panther from the Marvel Universe during the 2018 New York Comic-Con at Javits Center on October 7, 2018 in New York City. Photo by Roy Rochlin/Getty Images

A fan cosplays as Black Panther from the Marvel Universe during the 2018 New York Comic-Con at Javits Center on October 7, 2018 in New York City. Photo by Roy Rochlin/Getty Images
Listen Now

Many comic book fans like to show off their love of the medium: dressing up as characters, going to comic conferences, holding endless debates online. But Black fans of comics haven’t always been welcome in the world of comics, or in nerd culture, generally, and that represents a big opportunity for investors and entrepreneurs.

“You are talking about a segment of the population that for decades have been totally ignored, or thought to not exist, like unicorns,” said John Jennings, an artist and professor of media and cultural studies at the University of California at Riverside. “I can’t tell you how many times people have said, ‘well, Black people don’t read science fiction,’ or ‘Black people don’t like comics.’”

The rules created by comic book fans are rigid, and many in the Black community have been left out.

“For a long time, you couldn’t play certain characters unless they were directly identified with your race,” said Kathryn Finney, who runs the venture platform Genius Guild. “You can imagine how limiting that was, because there weren’t that many Black characters to play.”

Finney is Black, and identifies as a bit of a geek herself. But she didn’t realize how much money was being spent by people in the geek world until she attended a comic book conference.

“There’s a huge community there, and it’s also a community that has a lot of disposable income,” said Finney. That’s one of the reasons Finney invested in QuirkChat, an app meant to provide a safe space for people of color to embrace their passions, be it anime, comics, or horror films.

The app was founded by Bee Law, who grew up in a Black Baptist household in North Carolina. She was into all those things, but her family wasn’t.

“I bought ‘Harry Potter and the Sorcerer’s Stone,’ and my mom found it,” said Law. “This was during the time where churches were like, it’s witchcraft. So she destroyed my book.”

Law says QuirkChat provides the kind of community she wished she had growing up. Users load videos to the app (called Quips) where they ask questions like: “Which witch movie is good to watch? ‘Witchcraft,’ ‘The Craft,’ or ‘Practical Magic?’” (“Practical Magic,” no question.)

“People want to feel that other people feel what they’re feeling in certain moments,” Law said.

QuirkChat launched this spring, and has 40,000 users, 60% of whom identify as female.

As platforms like QuirkChat grow, they may face the same problems that other social networks do, of disinformation and people just being mean to each other. Investor Kathryn Finney said she’s not worried.

“If that happens, that’s a really great problem to have,” Finney said. “To be so big that you have to figure out how to moderate better.”

“I remember when I first pitched this to friends, who were Black lawyers, and people on Wall Street, they were like, ‘Who’s gonna use this, you and the three other Black nerds in America?’” Wasow said.

At its peak, Black Planet had about 3 million users a month. Since then, sites like Facebook and Twitter and TikTok have come to dominate social media.

“A little bit of what’s lost in that transition has been spaces that allow subgroups to really form tighter bonds,” said Wasow. “What was wonderful about a site like Black Planet, and what I hope for more of in the future of the internet, are communities of interest that are really driven by people’s common passions.”

Those passions could also appeal to a wide audience, according to John Jennings of University of California at Riverside. He said that we should see more Black comic characters, from more Black creators.

“If people can get past their, quote, unquote, ‘differences’ then they’ll see just a whole new world,” Jennings said. “And you know, we’ll capitalize on it, because that’s what we do.”