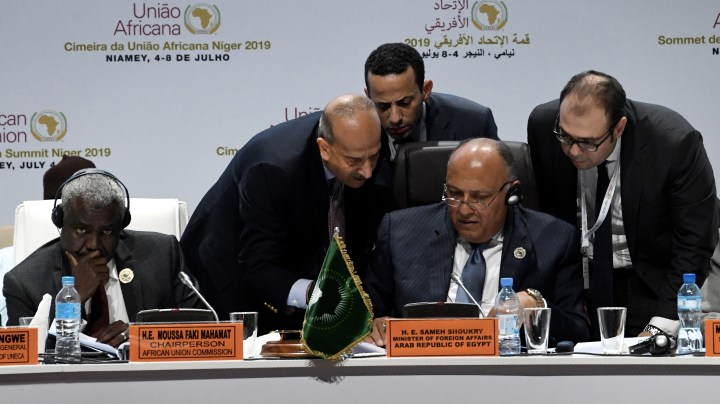 COPY
African Union leaders meet on July 5 in Niamey, Niger. The launch of the AfCFTA was the focus of a summit held in Niamey. Issouf Sanogo/AFP/Getty Images

African Union leaders meet on July 5 in Niamey, Niger. The launch of the AfCFTA was the focus of a summit held in Niamey. Issouf Sanogo/AFP/Getty Images
Listen Now

This week, 54 of 55 African Union members launched the biggest trade area since the creation of the World Trade Organization. The African Continental Free Trade Area, or AfCFTA, is set to create a new $3.4 trillion economic bloc covering over a billion people.

This deal is meant to “ease trade among African countries,” said Yvonne Mhango, an economist at Renaissance Capital in South Africa, pointing out that many of these countries trade more with China or the United States than they do with each other. AfCFTA is designed to achieve this by removing most tariffs, which could bump intraregional trade by up to 25%, according to Reuters .

But Mhango says removing those tariffs is the easy part of improving African trade.

“One of the biggest obstacles to trade is the nontariff barriers,” said Mhango, “and by this I mean logistical challenges and infrastructure and just the bureaucracy of going through immigration posts and going through customs at various borders.”

Details on how to fix those logistical problems are still being hammered out. John Campbell, former ambassador to Nigeria and current senior fellow at the Council on Foreign Relations, said that part is “going to take some years to implement, and then some years for the impact to be seen.”

But if it all works out, he said, this deal could transform the economies of Africa.