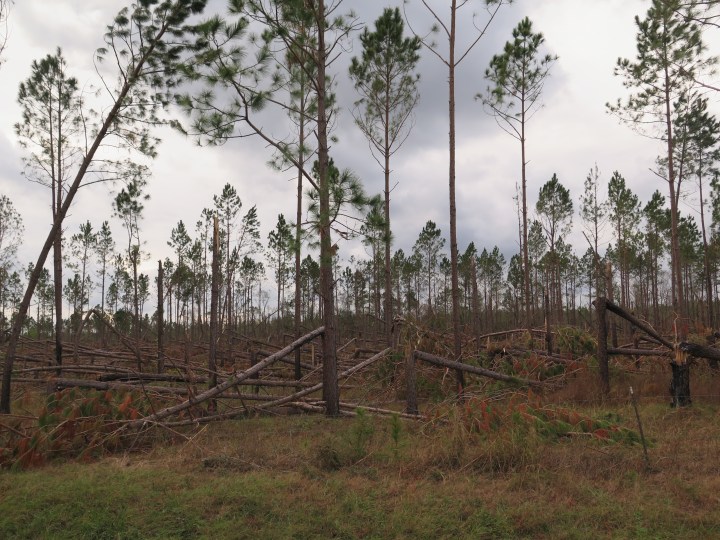 A federal disaster relief package, supposed to provide funding to communities that are recovering from natural disaster, has been frozen in Congress for months.

Politicians are in disagreement over how much money should be included for storm-damaged Puerto Rico, which has stalled delivery of the package.

In southwest Georgia, farmers have been waiting for this aid since October, when Hurricane Michael devastated the region. And the delay has already made its mark on the local economy.

Valorie Cook, from Colquitt in Southwest Georgia, re-opened what had been her parents’ grocery store last summer.

At Privett Store on Highway 91, Cook sells drinks, snacks and groceries, mostly to farmers. And when they have a bad year, she said, so does everyone else.

After Hurricane Michael, Cook said, if it weren’t for out-of-town tree removal workers who came by the store while cleaning up the area, she would have had to close earlier this year.

Eric Kimbrel, who farms in Calhoun County, lost about half of his peanut and cotton crop to the storm. Since then, he said the community has pulled together by pitching in to fix up buildings and help each other out.

Kimbrel himself sells agriculture supplies and has clients with overdue bills. Just like his local farm hardware store has worked with Kimbrel over missed payments, he said.

“I just told him, I said, ‘Look, I appreciate you working with me. It’s been three months since I paid my bill.’”

Kimbrel had been hoping to pay that debt with a farm loan. He eventually got that loan, but months later than he wanted. And those loans are important; most farmers need them to cover operational expenses until harvest, and farmers in Georgia hardly had a harvest, last year, because of the storm.

The delays have put farmers like Kimbrel in a vulnerable spot. “I think it’s a three- to five-year process, getting out of the hole,” he said. “That’s if we don’t have another hurricane. That’s if Mother Nature cooperates.”

This is where the federal aid would help. Without it, damage has already been done, said Hank Jesture, who owns Cornerstone Insurance Group and processes loan applications in the nearby town of Blakely.

“There’ll be some folks who will not farm because the disaster package has not been passed,” he said. 80% of his business is agriculture.

The Georgia state government has put up $75 million for an emergency loan program, and it’s already been distributed. With $2.5 billion in crop losses, Georgia farmers are still looking to the federal government for relief.