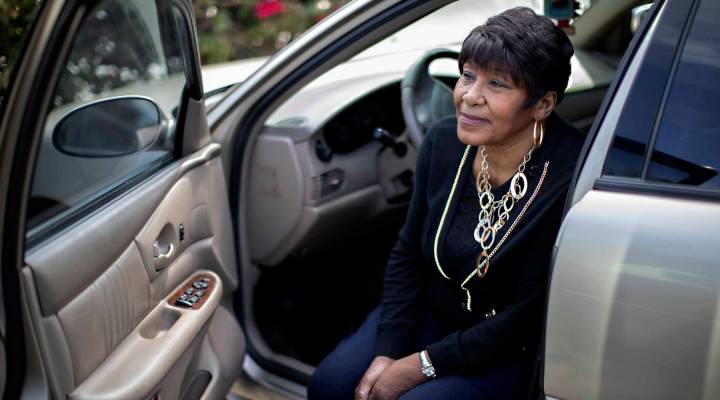 COPY
Emma Allen drives herself to work most days. It’s convenient, but the cost of car insurance stretches her limited budget. Sean Havey for California Dream

“The people who are working well into their late 60s, and possibly into their early 70s, tend to be in professional jobs,” said Nari Rhee, director of the Retirement Security Program at the UC Berkeley Labor Center.

Higher-income workers often have better job protections. Professors may have academic tenure; lawyers, their own practice. For those who need the income the most, finding and keeping a job is often much harder.

“For low-wage workers, you pretty much hit a wall,” Rhee said.

Working because they want to

About 19% of Americans aged 65 and older are now in the workforce, up from about 12% in 1996. The U.S. Bureau of Labor Statistics projects that by 2026, nearly 22% of people 65 and older will be working, with those 75 and older experiencing the fastest growth rate.

In Southern California, those who live in wealthier areas are more likely to have jobs. Nearly 30% of people 65 and older in Beverly Hills are still employed, according to U.S. Census Bureau data. That’s the highest senior employment rate in the state. Other affluent enclaves like Newport Beach, Santa Monica and Laguna Niguel are not far behind.

“Who the hell wants to retire?” Shannon said. “I don’t want to retire. Why would I retire? I’m enjoying what I’m doing.”

The 79-year-old had a long career as an actor before going into academia. He appeared on soap operas, did theater, narrated commercials. He even starred in a ’70s French surrealist film that has since gained a cult following. But when he reached his 50s, he didn’t find acting as fulfilling as he once had. Shannon didn’t know it at the time, but he was going through something people in his field call “generativity,” a process of transformation not unlike a midlife crisis.

At 55, Shannon went back to school as an undergrad, stayed on to get his PhD in gerontology, and eventually landing the job he has now. Shannon admits there are days when he might not feel like going to the office.

But then, Shannon said, “I think to myself, ‘You’re so damn lucky to have an office to go to. To be in demand, and be doing something that you like, and that pays you pretty well. Get your butt into the office!’”

A recent survey by the Transamerica Center for Retirement Studies (TCRS) — a nonprofit funded by Transamerica Life Insurance Co. — found that 69% of baby boomers said they planned to keep working past 65. Respondents were most likely to cite financial reasons for continuing to work later in life, but they cited quality of life as a factor nearly as often.

Working because they have to

For lower-income older Americans, work is a financial necessity. But age discrimination and the physical demands of blue-collar work can force lower-income seniors into early retirement. In lower income areas in Southern California, including East Los Angeles and cities Hemet and Banning, fewer than 10% of seniors are working.

Emma Allen, 71, has been job hunting for years. Like many seniors, she has no savings. Her nest egg was tapped out by medical bills toward the end of her husband’s life.

Emma Allen crosses the street near the South Los Angeles senior center where she works as a receptionist as part of a job training program for low-income seniors.

“I don’t have a choice,” Allen said. “I need the income.” For the past four years, she’s been working the front desk at a senior center in South Los Angeles, as part of a job training program for low-income seniors through the City of Los Angeles. Most participants exit this program without another job lined up. Allen’s time will be up in May. Laura Trejo, general manager of the city of Los Angeles’s Department of Aging, said the deck is often stacked against older workers — despite their reliability, experience, and work ethic.

“We still live in a society that has a lot of ageism,” Trejo said. “People judge somebody maybe by their wrinkles and the gray in their hair, and not necessarily by what they can contribute to the workplace.”

Last year, Los Angeles reported a 22% spike in the number of homeless seniors aged 62 and older. Trejo thinks that convincing more employers to hire seniors could be one way to reverse that trend.

The Great Recession only made things worse for many Californians nearing retirement. The racial wealth gap widened during the financial crisis, to the point where U.S. black and Mexican households in Los Angeles have only 1% of the wealth held by white households, according to a report from the Federal Reserve Bank of San Francisco.

Allen has to constantly look for a job in order to stay in her job training program. Her search is documented in a thick manila folder with every place she’s ever applied to: big box retailers, restaurants, daycare centers. But no luck so far.

“I’m running out of places. I don’t know where else to go,” she said. If she doesn’t find a job, she’ll have to move in with one of her kids. But she doesn’t want to be a burden. And she wants to keep working.

“It’s part of making me feel that I’m worth something,” she said. “I’m contributing something. I’m not just sitting on my hands waiting for somebody to give me something. Maybe, somewhere down the line, somebody might see that.”