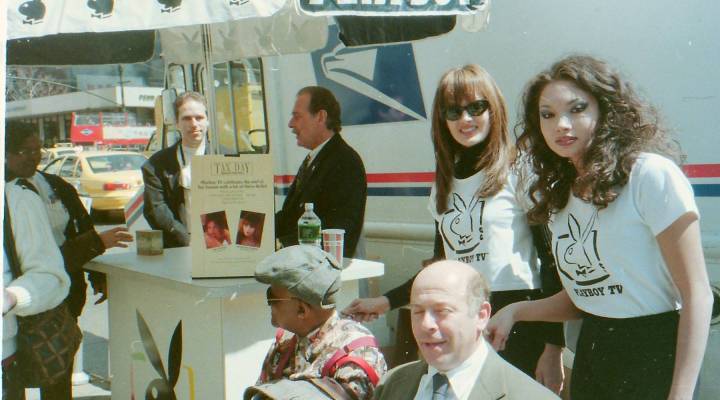 Today is April 15, also known as Tax Day. According to the IRS, 90% of U.S. taxpayers file online, either through an accountant or using tax software. But there was once a time that hordes of last-minute filers descended upon the post office on this day, rushing to get their paper forms in before the deadline. Some would even sit on the floor and do their taxes with a pen and a calculator.

Companies saw this as a marketing opportunity. One year, in Atlanta and New Orleans, Popeyes Louisiana Kitchen gave out coupons for its new po’boy. In LA and Chicago, Westin Hotels rolled out mattresses onto the sidewalk, manned by employees in robes. In New York, Snapple sent somebody in a giant banana suit to hand out samples of its new drink, “Go Bananas.”

“We’d get a couple of questions like, what does Playboy have to do with Tax Day?” said Michael Nagle, who runs digital sales agency Ashling Digital, and was a marketing executive at Playboy in the 90s. “When we’d explain it, ‘Oh, well, we’re doing a stress relief promotion,’ it kind of put a smile on people’s faces.”

Bands would show up, too. In Lawrence, Kansas, the Alferd Packer Memorial String Band performed at a post office for decades. Taxpayers would line the entryway to the post office, cheering on last-minute tax filers. “It was a huge deal for us around here,” said Steve Mason, a member of the band. “It was like an extra national holiday.”

April 15 was also a chance for protesters to get their message to a captive audience.

Tax Day at the post office became a kind of civic ritual. People came together to meet one of the few deadlines we all share. But Tax Day parties don’t really happen anymore. Only about 10% of U.S. taxpayers mail their returns. And a lot of post offices have cut back their late hours on Tax Day.

Larry Zelenak, who teaches tax policy at Duke Law School, doesn’t think we should all go back to filing by mail. But he says we have lost something: “a sense of taxpaying as a communal obligation, rather than something that just happens between you and TurboTax on your computer.”

There are some who are trying to keep the party going. The Columbia University Marching Band in New York City has performed tongue-in-cheek inspirational music at the steps of the city’s main post office on Tax Day for almost 40 years. They play songs like the “Rocky” theme and “The Final Countdown.”

Who understands procrastination better than a college student? “I think we all can, at the bottom our hearts, feel a little in line with what they’re going through, in the last second, having to turn those things in,” said Cameron Danesh, who plays alto sax and is head of the band. He says that even though the event is much smaller than it used to be, they’re going to stage it.

Tonight at 11:30 p.m., they will be there, ready to cheer on the few taxpayers who still do things the old-fashioned way.