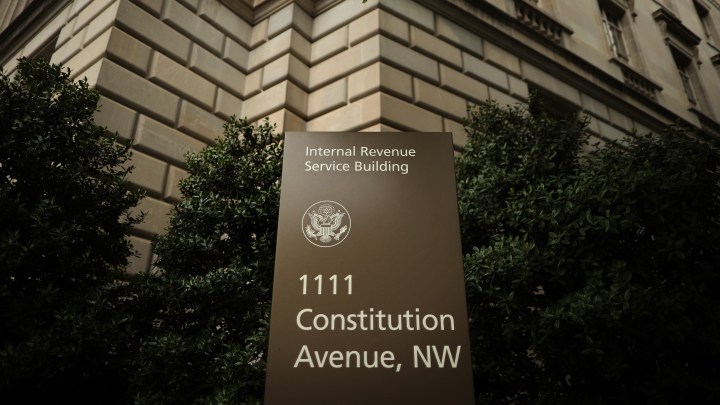 COPY
Democrats are scaling back their proposal to expand IRS crackdowns in an effort to target wealthier tax evaders. Chip Somodevilla via Getty Images

Democrats are scaling back their proposal to expand IRS crackdowns in an effort to target wealthier tax evaders. Chip Somodevilla via Getty Images
Listen Now

Democrats are scaling back a proposal that would help the IRS crack down on people and businesses who owe taxes. The original plan called for requiring bank deposits and withdrawals totaling over $600 to be reported. Now, the threshold would be $10,000.

President Joe Biden’s social and safety net spending plans were to be funded in part by increased IRS enforcement to collect unpaid taxes — raising revenue by closing the “tax gap.” That’s “the difference between taxes that are paid and taxes that should have been paid,” explained Steve Rosenthal with the Urban-Brookings Tax Policy Center.

The government fails to collect around 15% of taxes that are owed each year, said Natasha Sarin with the U.S. Treasury Department.

“That was about $600 billion last year,” she said, adding that most of that is from the very wealthy. “The top 1% are responsible for almost 30% of unpaid taxes in this country.”

Forcing dishonest taxpayers to pony up is a big part of the Biden administration’s plan to fund social programs.

“It is a critical pillar to pay for the plan,” said Chuck Marr with the Center on Budget and Policy Priorities. But he said that increasing the reporting threshold to $10,000 won’t make much of a difference, because the IRS has the most to gain from collecting on wealthy tax cheaters.

“The target is for people who are higher up,” Marr said.

For this to work, the IRS is also going to need more resources. Rosenthal with Urban-Brookings points out that the IRS has taken on a lot of new programs lately, like monthly child tax credit deposits and “COVID relief — we’re asking too much and giving the IRS too little,” he said.

So the plan includes a bigger budget for more auditors and computer technology to catch evaders and make them pay.