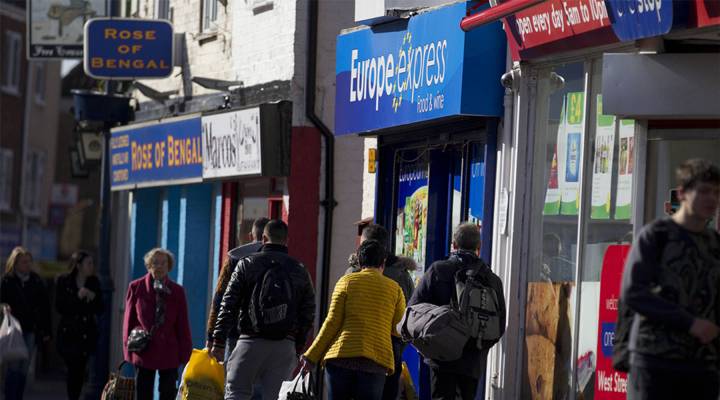 Shoppers walk along the high street in the market town of Boston in Lincolnshire in 2015. Lindsay Parnaby/AFP/Getty Images
Brexit

Shoppers walk along the high street in the market town of Boston in Lincolnshire in 2015. Lindsay Parnaby/AFP/Getty Images

No town in the United Kingdom wanted to exit the European Union as much as Boston, Lincolnshire, about 100 miles north of London.

U.K. residents voted to leave the EU by 52 percent vs. 48 percent. In Boston? The vote to leave hit more than 75 percent.

The town — which Boston, Massachusetts, was named after — experienced a 460 percent rise in immigration between 2004 and 2014. Many of these new residents came from Eastern European countries like Poland, Lithuania, Latvia and Romania, all of which joined the EU in that time frame. Some Bostonians voted to leave the EU as a way of expressing their dissatisfaction with the rising number of immigrants.

Many people have compared the Brexit referendum result with the 2016 election of President Donald Trump. It’s possible to draw parallels between the anti-immigration sentiment in parts of the U.K. and the reason some American voters may have gravitated toward Trump. According to 2016 exit polls, 64 percent of Trump voters said immigration was the most important issue facing the country.

We spoke to a number of Boston residents about where they fell on the issue of Brexit, and why they voted the way they did. While many of the people we spoke with wanted to exit the EU, there were some who said they believed the U.K. should remain in the union.

Maxine Hill inside of her flower shop, Lovelace’s Flowers.

On how business is doing:

“It used to be a lot better before supermarkets started selling flowers and doing all sorts of things like that. So, obviously, your local florist shop, they’re going to miss out somewhere along the line.”

On why she voted to leave:

“I do believe in world trade. I don’t believe that we should be stuck with just the EU. That was my big thing. The fact that they had open borders, I didn’t agree with that — basically because of the huge influx of EU citizens, and the fact that our own kids can’t really get jobs.”

On how she’ll feel if Brexit keeps getting delayed:

“Democracy will have just gone straight out the window, won’t it? What was the point of it in the first place, if that is what they had in mind?”

Anton Dani is a Boston councillor who owns a business called Café de Paris. He is pro-Brexit.

Occupation: Town councilor and the owner of a coffee shop, Café de Paris

On why he’s pro-Brexit:

“The issue for me: I think we cannot be under a dictatorship, which is from Brussels. They cannot tell us not to fish in our waters, they cannot tell us to take migrants, as much as we can. I think it’s wrong. Europe as an economic group, it’s very fit, it’s very good for everyone. But politically, it’s not fit.”

On whether Boston is facing economic difficulty:

“Boston is thriving. We cannot deny that, because there’s a lot of projects coming to Boston. Let’s not be negative. It’s easy to be negative, but it’s hard to be positive.”

On whether Brexit has affected his business:

Wajid Hussain is a sales assistant at the Boston clothing shop Motion Active.

His view on the current political situation:

“To be honest, politically, even the politicians don’t know what to do. Most of them are Remainers. But they want to leave because when they [did the] referendum, most of the public voted to leave. I, myself, voted to stay in. But now we know what a mess they’re in and they don’t even know what to do.”

On how Brexit could affect business:

On what will happen if Europeans stop migrating to Boston:

“Well, the problem is, people do not understand this. There are a lot of Europeans in Boston who are running businesses, and people are complaining why they [are] opening shops … they should be actually happy because they are paying taxes, which are paying for their benefits.”

On whether the local economy is challenging:

“Probably is. But, you know, this is the trend, isn’t it, in the U.K.? Town, cities where the local authorities are not getting the money from central government, or the business rates are too high.”

“I think we’d be much stronger if we [were] in — no country can do without another one in the modern world, today. We don’t select these, do we, if there’s a war. You know, I was a kid when the Second World War was on. And we didn’t say, ‘Oh, you know, we’re not going to ask for American help, Russian help, Poles.’ Many, many countries took part in assisting us, though some of it may have been underground, to help to get people back here. I think we are better united than not. I think it’s a fantasy to think that we can survive as what used to be called Great Britain.”

Hamish Blair (center), a stonemason, was against Brexit.

On what it’ll be like in Boston if Britain leaves the U.K.:

“I don’t know. Nobody knows, do they? So it could be good, could be bad, but it’s going to happen. There’s no stopping it now.”

On how Boston has changed over the years:

“It used to be really green. Everything’s now built on. It’s been really different, a lot’s closed down. If you was to go down West Street and High Street, it’s very European, so that’s thriving. But I think for people that’s lived there my whole life, like our markets and our shops, you’re lucky to be my age and have a full-time job. There is no jobs.”

On whether she thinks Brexit will change Boston’s economy:

“I would like to think so. I voted out, I’m quite happy to say I did vote out. But that’s because … when I was growing up, at 14, I had a paper route. I worked in a bridal shop over the weekend. When I left school, I went straight into retail. Retail was dying, so I went into bar work because it was, you know, bar work doesn’t really die. Well, I say that, then you look around this place and the pubs are empty.

On why she disagrees with people blaming European immigrants for the town’s economic conditions:

“You can’t blame it on the Europeans, because they come here for a better life, and that’s not their fault for wanting to do that. You can’t — you know, if we were in that boat, we would do that. Of course you would, you’re human aren’t you? You want a better life for your family.”