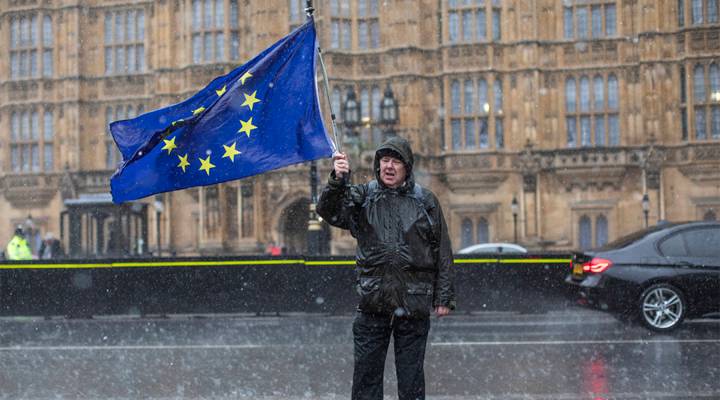 It’s been almost three years since the United Kingdom voted to leave the European Union, and as the deadline for Brexit – Britain’s exit – from the EU draws near, Kai Ryssdal and the rest of the Marketplace team are in the U.K. to explain why what’s happening over there matters to us over here. Decision-makers and real people share stories of how Brexit has shaped how they live, what they think about their economic future and how they’re making it in this new normal. We’ll consider all of this in a global context and, yes, answer your questions about Brexit. Follow Kai and the team’s reporting on Instagram, and read more of our Brexit coverage here.

The ever changing series of events surrounding the United Kingdom’s exit from the European Union has left many British citizens anxious about the future of the economy. While Prime Minister Theresa May readies parliament for a third vote on a deal with the EU, will party turmoil and broken political alliances threaten to topple a deal yet again? And how are Brits feeling about this process? Marketplace host Kai Ryssdal is in the U.K. this week, speaking with people about Brexit and what it means for their lives. He spoke with Marketplace senior reporter, Kimberly Adams from outside the Houses of Parliament. Below is an edited transcript of their conversation.

Kai Ryssdal: I am standing in Parliament Square right outside the Houses of Parliament, Westminster Abbey is around the corner. There are some protests going on here, but the point to be made is that these people are just tired and the protesters are looking a little lackluster; they’re just standing there waving their EU flags or their “Brexit no deal right now” flags. People here are tired of this whole story.

Kimberly Adams: And I have to imagine the folks in parliament are tired of it, too.  Action last night supposedly more votes coming tomorrow. What’s happening there?

Ryssdal:  Way more votes coming tomorrow. So first of all, let’s be clear; this is a political story but we’re going to cover the economics of it, because no matter when Brexit happens — and frankly that’s in some doubt now — the economics of it, the economic impact, the business impact of it, has already started and is already happening. To the politics of it for a second though: Prime Minister Theresa May is in some political jeopardy here. There are votes happening tomorrow. The parliament is going to decide, maybe, what it wants to do and then probably on April 12 but maybe May 22, who knows, the U.K. is scheduled now to leave the European Union, if nothing changes in the next 48 to 72 hours which is a gamble.

Adams: Right because things seem to always change with Brexit. But speaking of those changes we expected that deadline to be this Friday, which is why you’re there right now. So why are you still there right now?

Ryssdal: We’re here because the economic story has already started. We’ve been out talking to people for  three or four days now and here are just two snapshots. We went out yesterday and talked to a guy, he’s an Italian gentleman working here for 15 years, runs a fashion company. He imports fabrics and designs and materials from all over the European Union and he says he spends 25 percent of his time dealing with Brexit and the ramifications for his business. Talked to another guy at a pub last night who’s in the food importing and exporting business, he says 80 percent of his time over the past year has been spent dealing with Brexit. And so when you think about not only the government concentrating on Brexit so much, but businesses concentrating on Brexit, that’s real impact when these folks are having to do this at the same time as they’re trying to run their business.

Adams:  It must be exhausting but at the same time like what other vibe are you getting out there? I mean if there are protesters I’m guessing there’s some anger too?

Ryssdal:  I think more than anger … there’s great political frustration, there is great economic frustration. And then you look at the people who voted to leave and who knows when or if it’s going to happen. One of the things we did Saturday when we got here is we took a train up to Boston, England. We went to Boston because that is the most pro Brexit city in the U.K,  75 percent of the people voted to leave. For them it’s a migration story more than anything else. The folks in Boston have seen an influx of mostly Eastern European immigrants, lots of folks from Poland and Lithuania and the catch for them is this: They are a labor force those folks are, and they have revitalized parts of Boston which has fallen on some economic hard times. But also the locals, the folks who have been there for a while, they’re seeing crowding in hospitals, they’re seeing crowding in their schools. And so while they want that economic gain that they get, the labor force that they get from these eastern Europeans, they don’t want the crowding that happens with extra people in their community.