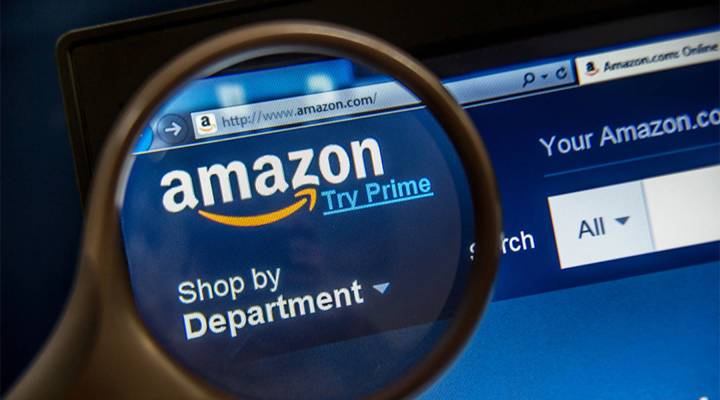 You know how there’s this sense that if Amazon gets into your line of work, you’re in trouble?

Amazon has been slowly building up its ad business, letting brands target ads to people on Amazon.com and its other sites, like the live-streaming platform Twitch, IMDB, Zappos and all across the web. Its pitch is simple: Amazon is telling advertisers that the best predictor of what you, the consumer, are going to buy is what you’ve already bought.

A report out today from research firm eMarketer says Amazon has been a distant third behind Facebook and Google and is starting to look like a dangerous third. Host Molly Wood talked about it with Monica Peart, senior forecasting director for eMarketer.

Monica Peart: So over the next year, we expect that Amazon will cross over the $15 billion mark, meaning that it’s definitely gaining share on the top two ad-selling platforms, Google and Facebook, and gaining over 10 percent share in the market, which will be quite a feat when we think about not even being 5 or 6 percent in the past couple of years.

Molly Wood: Tell me about the data advantage or the data play that Amazon has. It seems like it’s taken people a long time to realize the potential power of Amazon knowing what you buy [including maybe Amazon itself].

Peart: Exactly. That’s really the true differentiator when we think of Amazon and its competitors. Google certainly knows what we’ve searched for, and Facebook definitely knows what we’ve liked and who we are connected to. But Amazon will know what we bought. For advertisers that are selling products, that’s really helpful to know.

Wood: So any commerce, any ad business, relies on your data. Amazon has a lot of trust right now with a lot of consumers at a time when people are getting more mistrustful of the advertising ecosystem and how much information it gathers. Is that a concern for Amazon, that consumers might say, “I didn’t know you were going to use my information this way”?

Peart: Essentially it comes down to ease of use and whether the customer is getting what they’ve asked the platform for. And so, such as it is with other platforms, as long as you’re returning the search results that you’re looking for, consumers can be quite forgiving about sharing information. So that’s an opportunity, of course, for Amazon, but it is something that consumers will start to think more and more about. The question becomes whether advertisers see that as a risk.

Bloomberg had a good story over the weekend about Walmart and its ad ambitions. It says that Walmart has more U.S. customers than Facebook, Google or Amazon but hasn’t quite figured out how to take all that good information about what people like to buy and turn it into money. Amazon’s rapid growth in terms of advertising is certainly offering a model. In fact, the story notes that Target, grocery chains like Kroger and other brick-and-mortar stores are starting to make the same pitch to advertisers about how useful their data is for selling ads that get people to actually click and buy.

It’s a super interesting development because it tells you that the race for who’s going to win the internet era is definitely not over, even though it feels like Facebook and Google have a lock on the whole thing sometimes. Advertisers are a mercenary bunch. They’re looking for something called conversion rates — that’s when we actually click and buy instead of just ignore ads. If they start getting better conversion by buying ad space from Walmart or Target or Sears or Domino’s Pizza, then all of a sudden Facebook and Google don’t make so much money after all and they’re not so invincible. Of course, Amazon could just end up being the most invincible of all, but either way, the story is not yet written and it’s possible that a new chapter is just starting.