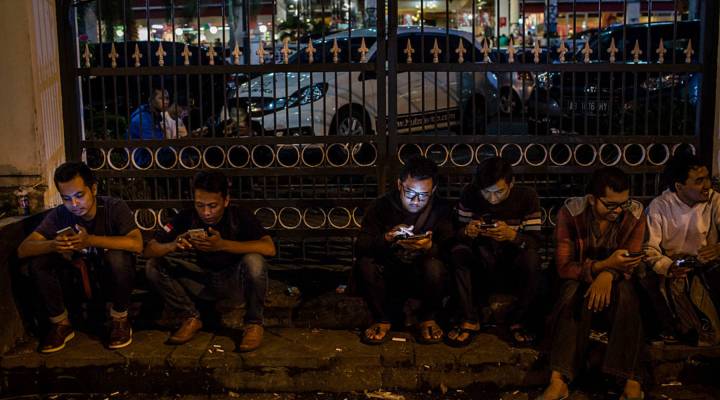 This week both Google parent Alphabet and Facebook reported blockbuster earnings, powered by increased advertising on mobile devices, which surged 63 percent in the second quarter from a year earlier.

It seems their strategies to invest heavily in mobile have paid off. In the mobile ad space, Google and Facebook are king. Between the two, they own about half of worldwide mobile ad revenue share, according to eMarketer. That puts them miles ahead of competitors like Alibaba and Twitter.

To understand why companies are clamoring for ads on mobile devices, just take a walk down the street. You’ll probably see this: “a variety of different folks from all generations, glued to their cell phones, either looking at an app or playing ‘Pokémon Go’ or trying to get directions,”  Ari Lightman said, professor of digital media and marketing at Carnegie Mellon.

And with mobile, he said, not only are companies like Google and Facebook collecting the usual info on you, like the sports teams you follow or those shoes you’ve been eyeing. They know where you are and when. “The analytics is incredibly impressive,” Lightman said.

Those analytics help advertisers make decisions like which ads to place where. Erik Brynjolfsson,  director of the MIT Initiative on the Digital Economy, said timing is everything in advertising. Ideally, companies want users to see an ad, and then right away, click the “Buy” button.

“And to the extent that people move around in the world, mobile gives you a chance to get them in those situations more effectively,” he said.

But have you tried entering a 16-digit credit card number on a tiny smartphone keyboard? Ben Edelman, associate professor at Harvard Business School, said this is the downside of mobile.

“If you want to buy a new laptop or plane tickets to Hawaii, doing that on your mobile still isn’t as easy as some folks hoped it would be,” he said.

But as more companies figure out how to make it easier for people to buy on the go,  expect to see even more mobile ads  luring you to that virtual checkout line.