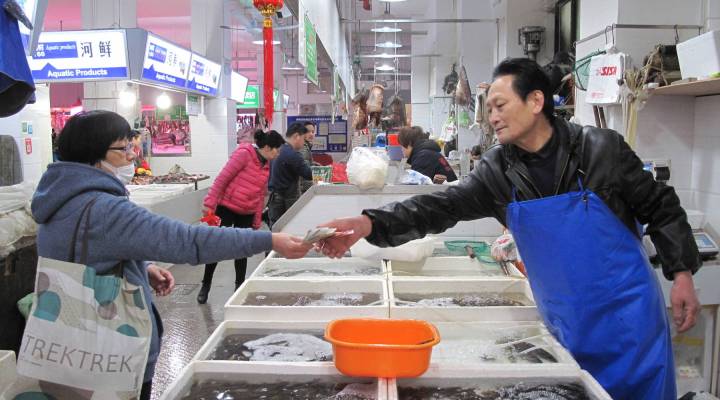 Ren Zhongyang prides his seafood stall for having some of the freshest and most expensive types of fish and eel for sale at the Changhua market in central Shanghai. His business has done well, as has his son’s seafood stall across town. However, even if they pooled their money together, they still cannot afford to buy an apartment in Shanghai. Instead, they rent a one-bedroom place.

“There are six of us staying there: me, my wife, my son, my daughter-in-law, and two grandchildren,” Ren said. “It’s actually a small apartment divided into smaller spaces. Ours is 200 square feet.”

It has been more than a year since China’s President Xi Jinping pledged to develop the rental market in the big cities, as part of an effort to tame soaring house prices. Yet rather than more affordable homes, rents in big cities continue to see double-digit increases.

Yan Yuejin with the real estate research institute E-House said the government’s plan has been focused on the supply side, which included attracting investors with land and easy credit to build rental projects.

“However, the policy did not address the demand side, such as expanding the limited rights of tenants,” Yan said.

The government’s push also had the unintended effect of attracting a new group of real estate brokers, who worked with landlords to upgrade the apartments, then rent them out at much higher prices.

“The situation now is that there are still some empty rental units. Some rental projects have shut or gone bankrupt because tenants can’t afford the (higher) rent,” Yan said.

Meanwhile, the government has demolished many buildings that don’t meet fire safety codes or have building permits, as part of a campaign to cap the big cities’ population. This has resulted in fewer cheap places for migrant workers to rent.

Ren Zhongyang and his wife Yang Suqing have owned their own seafood business but have only been able to rent in Shanghai for the past 24 years.

Seafood seller Ren said he could return to his village in eastern Jiangsu province. His house there is far more spacious.

“Even the area our pigs sleep in back home is bigger than the apartment we’re renting in Shanghai,” he said. However, the money he has earned in Shanghai allows him to own two properties in his hometown.

“It’s just for the money, otherwise why would we leave our hometown and endure this hardship?”