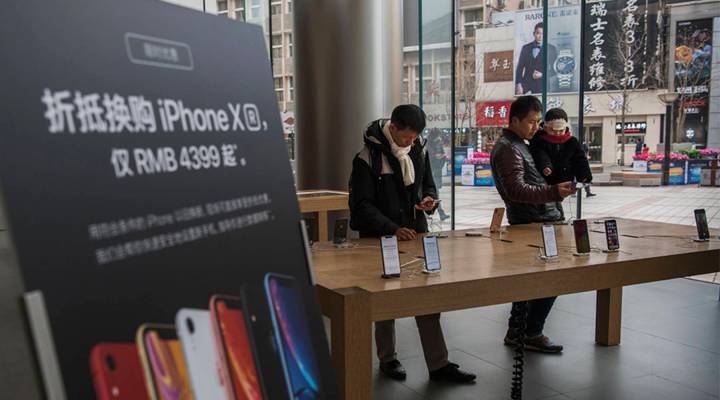 COPY
Customers look at iPhones on display at an Apple Store on this month in Beijing. Kevin Frayer/Getty Images

Customers look at iPhones on display at an Apple Store on this month in Beijing. Kevin Frayer/Getty Images
Listen Now

Global investors are intensely interested in what China’s consumers are buying and what they’re not, because a lot of American and foreign firms rely on the Chinese market for growth.

However, Apple has its own issues with its high price point and increasing competition from Chinese brands that have good price-to-quality ratios.

“You cannot really use Apple profit warnings as a proxy for the overall economy of China,” Oxford Economics’ Louis Kuijs said.

When it comes to consumption, he said the picture is mixed. There is a pronounced slowdown in the manufacturing of physical goods, while the services sector is performing better.

China’s economy is still growing, just not as fast as it used to.

We hit the streets of Shanghai to find out what is and isn’t weighing on consumers.

Xiao, 32, is a factory worker at a firm that makes metal parts in the manufacturing hub of Dongguan in southern China.

Xiao Zhenfang works for a factory that has fallen on hard times.

“My company is not doing well. It manufactures metal parts, but now it is running out of cash. I haven’t received my salary for a few months, [but] the owner of the company is from my hometown, so I haven’t forced him to pay me. I understand that times are tough. I will overcome the difficulty with the company together.”

Xiao has cut back on drinking and gambling on mahjong.

“With the economic downturn, I am trying to spend as little as possible. I will not go on my annual trip to my home village (in central Jiangxi province) during the Spring Festival.”

That would save him an average of 10,000 yuan to 20,000 yuan ($1,400 to $3,000). Normally a trip home during the Spring Festival, or Lunar New Year holiday, means he has to buy new clothes for the family, hand out lucky red envelopes (cash gifts), pay for dinners and gamble with friends.

Nanjing pedestrian street in Shanghai is a popular shopping destination.

Zhou, 32, is an event planner based in Shanghai.

Zhou said his company is small and he has stable clients.

Nope. Apart from rent, Zhou spends 20,000 yuan ($3,000) a month on things like restaurants, clothes from Timberland and trips. He said he has nothing left at the end of the month.

Lu, 72, is a retiree living in central China’s Wuhan city.

No. Lu said he has seen robust consumption in Wuhan.

Not as much as younger members in his family. He receives a pension every month of 3,500 yuan ($500), and aside from spending on food, he saves as much as he can.

“If I don’t save, then I might not be able to pay medical bills when I get sick,” he said.

Lu said his daughter, Fanny, is far less frugal with her children.

“My grandson’s milk powder is from Denmark and each can costs about $60,” Lu said.

That amount is equivalent to his monthly salary a few decades ago.

Martin, of FMW Restaurants, is operator of Red Lobster in Shanghai, which opened at the end of December. It’s the U.S. brand’s first branch in Greater China.

Yes, overall diners aren’t spending as much, but the outlook isn’t dire.

“[There is] an ever-growing demand for seafood in China, and there are no real major players in the Western seafood market yet,” Martin said.

He said people in China are aware of the Red Lobster brand.

“When we were in the U.S. around cities like New York, L.A., when you look at the Red Lobster restaurants that are there, there is a large number of Chinese people inside those restaurants. There’s already a lot of brand awareness in the marketplace,” Martin said.

When Red Lobster Shanghai opened, he said the restaurant sold more than 40 live lobsters on the first day, which is more than he expected.

“We’re not seeing that people don’t want to ever go out. We’re seeing that when there is a celebration, they want to make sure they’re making the right choice. They’re choosing to go with brands because they’re looking for security and they want to know that something is good.”

At the same time, Red Lobster offers a lunch for 78 yuan ($12), which is a competitive price for office workers in Shanghai.