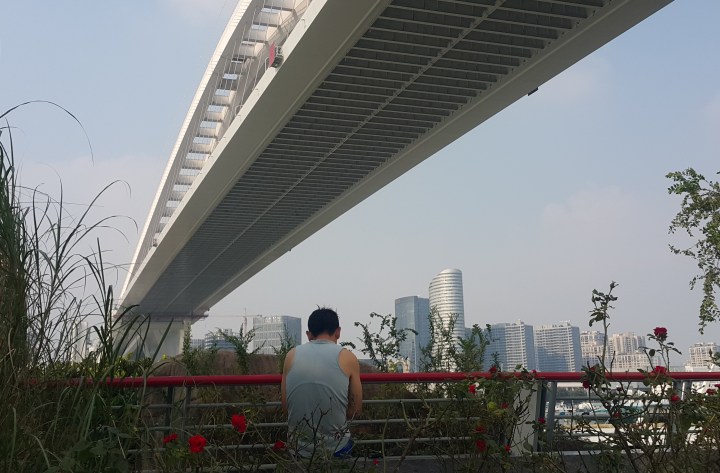 Thirty years ago, on June 4, 1989, the Chinese government brutally crushed a demonstration in Beijing’s Tiananmen Square, where students and workers had gathered to call for democratic reform.

China had been undergoing market reforms for about a decade, and the protesters felt, among other things, that the system was rigged in favor of people with political connections.

Fast forward three decades and China has the world’s second largest economy, after the United States.

Today, discussing what happened in Tiananmen Square is forbidden in China, but Marketplace asked young people what’s weighing on their minds.

Sun Wenhao, 22, will graduate in about two years’ time with a master’s degree in mechanical engineering.

While he is confident he can find a job in China’s booming auto industry, he is most worried about housing prices.

“They’re very high compared to the average salaries,” he said.

The average salary for a white-collar professional in Shanghai is $14,500 a year.

“Basically, I can only rely on my family, parents and grandparents for the down payment,” Sun said.

He said that he needs to own property because as a man, that is the only way he will be deemed “marriage material” in many parts of China.

Rent and cost of living:

Wu Junfeng, 23, graduated in 2018 with a marketing degree and left his home in southeast Fujian province to work in a bigger city.

He feels there are more opportunities in the city. But expenses are also higher.

That kind of money will get him a one-bedroom apartment — and it’s only affordable if he shares with a roommate.

It’s already difficult for him to save.

“I basically spend all of my salary every month for food and entertainment,” Wu said.

Lu Xinwei is majoring in “intelligent science and technology.” She is in her freshman year, but she’s already researching what kind of job she can get after graduation.

“It’s the third semester and … it feels like I haven’t done anything yet. If I continue down this path and graduate, then I will feel panicked,” she said.

Lu is Shangainese, and her parents own property, unlike millions of other families. So she is not under pressure to take care of her parents financially in their old age. They’ve done well enough for themselves that they can take care of her basic needs after graduation.

“I don’t have to worry about housing,” she said.

Her only concern is to find a career she’s passionate about, which, for now, she hopes will be in artificial intelligence.

Lincy Zhu, 25 is studying for a masters’ degree in literature. She is worried about what kind of job she will get after she graduates — and in which city.

Zhu feels Shanghai is too fast-paced, but she can’t return to her hometown in eastern Anhui province because jobs there are limited.

“My parents want me to strive for a better life in the big cities, but I don’t care for that,” she said. “I am not that materialistic. I just want a comfortable life and that means I won’t look for a job with a 9-9-6 schedule.”

But Zhu said she might not have much of a choice.

A record 8.34 million students will graduate from China’s colleges this year. By the time she graduates in two years, the competition for jobs may be even stiffer.

To her, health is much more important.

“I’ve had some close friends in the past two years who suddenly got diagnosed with a severe illness and died within a couple of months ,” Zhao said. “Since we were born under the one-child policy, the parents spent a lot to try to save them and now they’re childless.”

She wants to stay healthy.

“I hope there is a better social safety net which makes you feel assured that your health is under protection when you work,” she said.

Elio Yu, 22, is stressed about passing his exams in mechanical engineering so that he can continue his education.

“I want to work in the robotics industry, so it is better if I have a masters’ degree,” he said.

He believes there’s a big demand for robots in Chinese factories.

But China’s economy is not growing as fast as before.

The U.S.-China trade war is also adding pressure to the economy.

Yu is following this news closely, but he is not deterred about his future job prospects.

“To be successful, you should create your own opportunity rather than find an opportunity,” he said.

He doesn’t anticipate earning as much as his parents, who ran their own business, but he also doesn’t mind.

“My ideal is to have enough time for myself and not too much work pressure, and that I like the work that I do,” he said. “I don’t want to earn too much.”