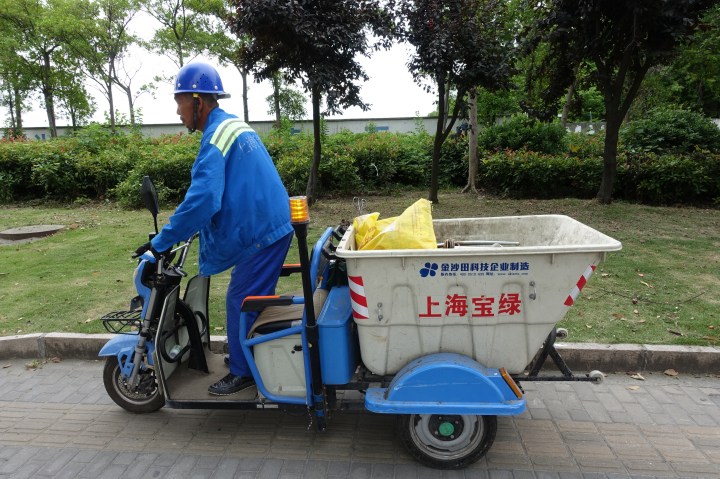 Li Xin’an spent decades of his life farming in a village in central Henan province.

He left to find work in the city three years ago at the age of 60 — the age when men are supposed to retire in China.

“It was my son who asked me to leave our village. He said I couldn’t earn much from farming. So I came to Shanghai,” he said. “I want to earn some money for when I’m older.”

For decades in China, those who had jobs with state-owned firms — and their families — were taken care of from cradle to grave. The social welfare system was known as the iron rice bowl.

This system has slowly disintegrated since the late 1980s as China allowed more private enterprises to flourish.

A new pension system has taken its place to cover company employees and people in rural areas. But it doesn’t provide the same level of retirement security.

According to a survey by the government-linked China Research Center on Aging, more than a quarter of people over the age of 60 in 2015 were still working. Of those, 86% were doing farm-related work, as Li used to do.

After Li moved to Shanghai, his wife, Zhang Rongzhi, joined him.

They needed to earn money so their son could find a wife.

In China, parents and even grandparents chip in to cover wedding expenses.

It is difficult for their son to find a wife because of China’s birth policy, which was put in place in 1979 to slow population growth. Initially, most families in cities were limited to one child, while those in the countryside, including Zhang and Li, could have up to two if the first born was a girl.

“My son was born in 1988. In those days, the family planning policy was strictly enforced,” Zhang said. “If a woman was carrying a boy, she would keep him. If it was a girl, the family would likely abort the pregnancy. This caused a serious gender imbalance.”

The preference for boys was so strong that by 2018, there were 32 million more males than females in China, according to government statistics.

Meanwhile, many Chinese families don’t consider men to be marriage material unless they own property. So the couple bought an apartment for their son.

They borrowed $19,000 from relatives. If they had stayed in the village, it would have taken them at least a decade to repay the debt. So they went to the city.

But finding jobs in Shanghai was difficult.

They tried cleaning jobs and got fired after a week.

“The firm didn’t want us because we were too old,” Zhang said.

However, she credits years of farm work and limiting her intake of meat for keeping her energetic.

Her husband, Li, coughs because he’s a smoker, but said he is in good health otherwise.

They held brief stints folding towels and washing cars. Eventually, someone introduced Li to another cleaning company, where he has been working for the past three years.

“My job is to collect garbage ,” Li said. “The job is OK as long as I can earn some money.”

Every morning he wakes up at 4:30 a.m. to empty trash bins in a residential complex in a Shanghai suburb.

His wife works in the same complex, cleaning staircases, mopping floors and sweeping the compound clean.

She works six days a week and earns 36,000 yuan ($5,200) annually, which is at least three times more than what she could earn in their village.

“The debt we owed for the apartment for our son has now been paid off,” Zhang said. “Now we can save money. As we get older, we will get sick. How can we live if we don’t have some savings?”

While China’s government covers 70% of medical costs, in the event of a major illness, the remaining expenses could bankrupt a family.

According to a documentary produced by government-linked China Education Television and Tsinghua University’s research institute for social governance and development, people in the rural areas of China depended on the land and their children to provide for their retirement.

The documentary reports that “China has built the biggest old-age security system in human history” over the past few decades. But there are limits.

“The pension for people in rural areas is low,” He Wenjiong, of the China Association of Social Security, said in the documentary.

“Retired workers in the cities get about 20 times more, which isn’t a small gap. But I believe the government can gradually solve this problem,” he said in the film.

That will be no small feat. In Henan province, Li and Zhang’s home, the number of people receiving pensions increased from 3.2 million in 2009 to 14 million in 2018, according to the film.

“We expect to pay nearly 20 billlion yuan ($2.9 billion) in 2018,” Li Bing, with the department of human resources and social security for Henan province, said in the documentary.

That works out to about $14 a month for Li and Zhang, who are eligible to receive pensions for those from the countryside.

Zhang said it is not nearly enough. She and her husband plan to work as long as they are healthy.

“There is no retirement in rural areas,” she said.