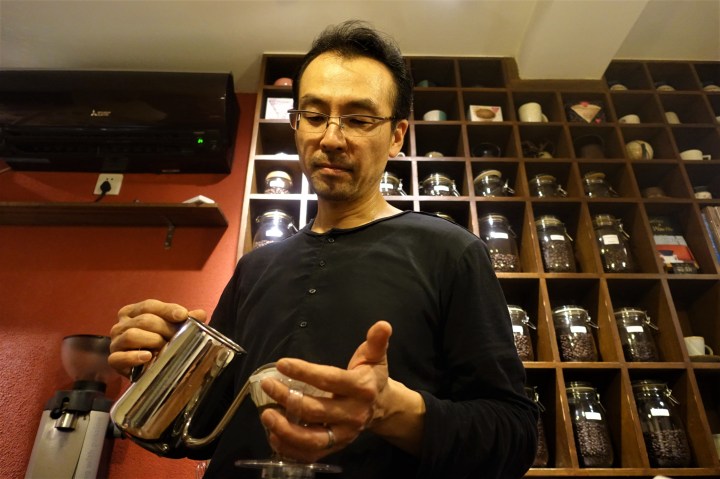 COPY
Keiichi Nakayama said his coffee shop, Rumors, was the first in Shanghai to specialize in hand-poured coffee more than a decade ago. Charles Zhang/Marketplace

Keiichi Nakayama said his coffee shop, Rumors, was the first in Shanghai to specialize in hand-poured coffee more than a decade ago. Charles Zhang/Marketplace
Listen Now

On Hunan Road in Shanghai’s French Concession, jazz music drifts from a shop with sleek wooden panels and leather seats. The place could easily be mistaken for a bar. Instead, the storefront is a high-end coffee shop called Rumors Coffee.

“When we first opened shop 11 years ago, we were the only ones to specialize in hand-poured coffee,” Rumors co-owner Keiichi Nakayama from Japan said. “We gradually started seeing other shops price their coffee the same as ours.”

Other coffee shops want to copy more than just their price, according to his wife, Liu Yan, who also co-runs the place.

“Some business owners brought their own designers in and started to measure the bar counter secretly. Our menus have been stolen,” she said. “Customers told us that there’s a coffee training school that was using our name.”

Coffee shops are a cutthroat business. It got worse during the COVID-19 pandemic.

According to a study by China’s Tsinghua University that included more than 50,000 companies, nearly 19% of small and micro-sized businesses shut down last year compared to 6.6% in 2019.

The pandemic lockdown can provide opportunities for some, like Juzi, who worked her way up from a barista to an operations manager at one of China’s coffee chains. She quit her job during the pandemic and opened her own coffee shop in June 2020, when Shanghai was fully reopening from a lockdown and she found an affordable rental space.

“After I opened my coffee shop, I found that within six months, a few more opened nearby. Coffee shops pop up in Shanghai so fast!” the 27-year-old said.

There are seven to eight coffee shops within a 1-mile radius of her own.

“The life cycle of a coffee shop [in Shanghai] is usually two to three years. We’ve been open for about a year, and this street is already full of coffee shops. I am under big pressure,” Juzi said.

She said she does not want to compete on prices since her Americanos, cappuccinos and lattes are already sold below Starbucks prices, which is used as the industry standard in China.

“Some new shops are offering an Americano for 9 yuan [$1.40] … half price if you bring your own cup. That is frightening,” she said. “At that price, I cannot guarantee the quality of the coffee.”

Instead, Juzi says, she stays in the game by researching and promoting new types of coffee every season. She has premium products like ice-dripped coffee, which take six to eight hours to produce one cup and requires advanced orders. Juzi also keeps her staff small and splits her rent with another business.

“We make coffee in the front. They sell paintings and do framing in the back,” Juzi said.

Rent is the biggest headache for business owners in pricey Shanghai.

During the pandemic, China’s central government announced rent reduction for businesses, but that only applied to those who lease premises from state-owned enterprises.

“To cope with high rent, most coffee shops sell liquor at night or other products,” Rumors Coffee co-owner Liu said. She and her husband have resisted doing so. Their focus is on maintaining quality and variety.

“A lot of people cannot go abroad because of the pandemic, so people are spending their money here [in Shanghai]. If you serve coffee that pleases people, word will get out and we get repeat business,” Rumors Coffee co-owner Nakayama said. “During the pandemic, the number of customers we’re getting is increasing.”

He and his wife feel China’s coffee culture is still in its infancy, despite a high concentration of coffee shops in Shanghai.

There are nearly 7,000 coffee shops in Shanghai, and just over half of them are boutique stores like Rumors Coffee and Nameless Coffee, according to a study by a business platform under Yicai. However, outside of the financial capital, coffee shops are not that popular.

“I never drank coffee before working at a coffee shop in Shanghai [at the age of 20],” Liu Yi, the barista at Nameless Coffee, said. “I come from a small Chinese city without a coffee culture.”

Yet, his coffee-making skills have left a deep impression on customers like Xiong Luying, who is a visitor from Wuhan city.

She had been to Nameless Coffee once before.

“That day I chose a particular bean and … since it was a hot day, I requested an ice coffee,” Xiong said. “The barista said he tried making it twice, but it did not reflect the bean’s best taste. He suggested I change to a hot coffee.”

Suddenly, barista Liu looked up from behind the coffee counter.

“Oh, that was you!” he said, and they struck up a conversation.

In a city of 24 million, the personal touch also makes for repeat customers.