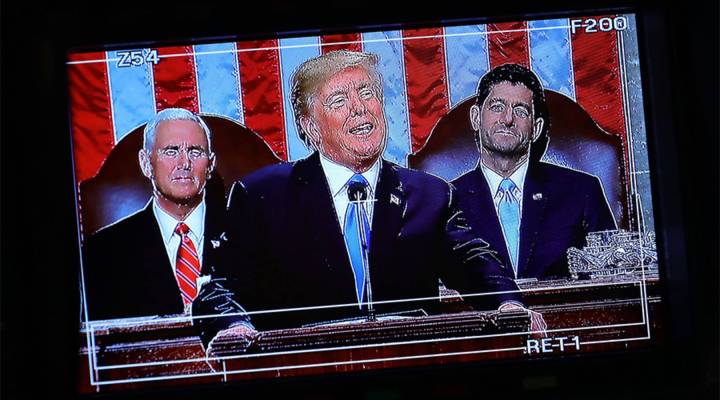 COPY
President Donald Trump appears on a television camera monitor as he delivers the State of the Union address on Jan. 30, 2018, in Washington, D.C. Chip Somodevilla/Getty Images

President Donald Trump appears on a television camera monitor as he delivers the State of the Union address on Jan. 30, 2018, in Washington, D.C. Chip Somodevilla/Getty Images
Listen Now

President Donald Trump is expected to use tonight’s State of the Union speech to highlight a strong economy, address the ongoing impasse over border security and potentially lay out new plans to deal with prescription drug prices and promote more investments in infrastructure.

The president included an ambitious infrastructure agenda in his last State of the Union address:

“Tonight, I’m calling on Congress to produce a bill that generates at least $1.5 trillion for the new infrastructure investment that our country so desperately needs. Every federal dollar should be leveraged by partnering with state and local governments and, where appropriate, tapping into private sector investment to permanently fix the infrastructure deficit. And we can do it.”

Adie Tomer, a fellow at the Brookings Institution Metropolitan Policy Program, said there were high expectations for infrastructure reform back then, given that the topic had been a major campaign issue. “And sure enough, within about a month or so of the State of the Union, we had a plan released to the public.”

But that plan, like many other infrastructure proposals, failed to advance.

“Everybody agrees we should have better roads and bridges. We should have better transit systems. We need to reinvest in this infrastructure,” said Brigham McCown, chairman of the Alliance for Innovation and Infrastructure and a former adviser to the Trump administration’s Transportation Department. “But when it comes down to who’s going to pay for the bill, it’s like everyone has shoved their hands in their pockets and looks around like they didn’t hear the question.”

But some infrastructure experts think this may be a more opportune moment for major reform.

“Folks are trying to be cautiously optimistic about the opportunity for the House Democrats and the White House to work together on a new package,” said Brookings’ Tomer. Senate Majority Leader Mitch McConnell and House Speaker Nancy Pelosi have expressed openness to taking up infrastructure legislation, and certain highway funding bills are set to expire in 2020.

“Whether it’s a big comprehensive infrastructure bill or not, there has to be something done,” said Michele Nellenbach, director of strategic initiatives at the Bipartisan Policy Center. “So that gives us an opening that we didn’t really have last Congress.”

Nellenbach said that momentum could create a unique opportunity for larger reform.

“I think everyone is interested in showing that a divided government can work … and an infrastructure bill is a win,” she said. “It will show to the folks back home that Congress is hearing about their needs. They understand folks don’t want to sit in traffic anymore, they understand about concerns about safe drinking water, and they’re taking steps to address that.”

That’s an understanding lawmakers definitely want to demonstrate heading into an election year.