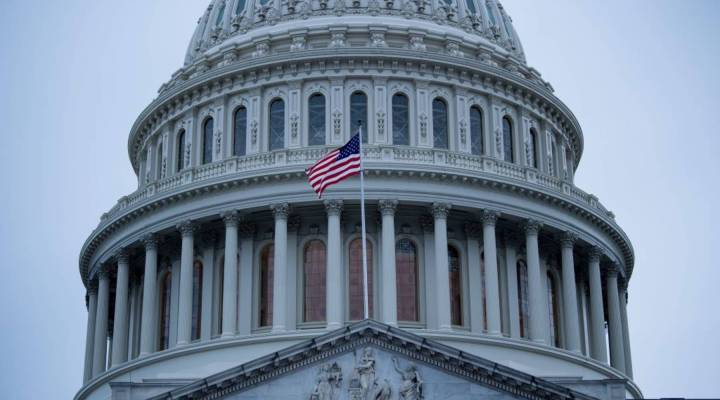 A view of the U.S. Capitol a day before the State of the Union address by President Donald Trump on Jan. 29, 2018, in Washington, D.C. BRENDAN SMIALOWSKI/AFP/Getty Images

A view of the U.S. Capitol a day before the State of the Union address by President Donald Trump on Jan. 29, 2018, in Washington, D.C. BRENDAN SMIALOWSKI/AFP/Getty Images

As we await President Donald Trump’s first State of the Union tonight, the Marketplace team has been thinking about what the president might say — and what he might not say. From the economy to immigration, jobs to education, here are some of the things that we’ll be listening for tonight.

The speech will highlight five issues: jobs and the economy, infrastructure, immigration, trade, and national security. Expect the president to highlight economic gains and attribute them to the tax overhaul — specifically: wage growth, low unemployment and a rising stock market. The president will tell us more about the framework he’s proposed for a DACA [Deferred Action for Childhood Arrivals] deal. He’ll talk about fair, reciprocal trade. On national security, expect the president to focus on rebuilding the military and defeating terrorism.

I don’t expect a lot of specifics, though.  Instead, look for broad themes and goals.

Things I’m curious about this speech, in no particular order:

He’ll talk about energy dominance. In 2018, U.S. oil production will hit historic highs, outpacing that of both Saudi Arabia and Russia, according to International Energy Agency forecasts. Analysts say it could reduce Russia’s energy dominance over Europe and foster better energy export relations with customers Japan and China. Surging natural gas production for electricity could lower energy costs in general, in both the U.S. and other gas-importing countries. Increasing energy exports could also lower the U.S. trade deficit.

Speaking of trade, put “America First” policy on your SOTU bingo card. Expect talk of cutting the deficit. The spirit will be “fair and reciprocal” trade policy and bilateral deals.

Infrastructure inevitably will be featured, but the federal government reportedly plans to put up $200 billion and ask everyone else (states, private industry) to foot the rest of the bill. For context, the American Society of Civil Engineers says we need more than $4 trillion in infrastructure investments by 2025 to keep up. Trump won’t say this, but a big pushback against the early plan is the rolling back of environmental reviews for approval of these projects.

I think we can expect the president to stay with the narrative that he is responsible for the strong economy, highlighting some of the stories we’ve heard in the last year about companies announcing new jobs and investments.

The speech will be a victory lap for the new tax law, and he’ll likely push the idea that this new law will benefit the middle class (although most economists agree the majority of the benefit goes to wealthier Americans and businesses).

I expect we’ll hear him push for a major infrastructure plan as he did last year, but likely without specifics on how to fund it.

I’m particularly interested in what he will say about immigration reform and possible funding for a border wall.

I think the president should explain (but might not) how “America First is not America alone.” I’ll also be listening for a rationale for our current global trade policy and how it squares up against our alliances and economic interests.

President Trump will likely continue his criticisms of Obamacare, renew his commitment to repeal efforts, and tout the FDA’s progress on generic medication approvals. He’ll also reiterate his stance on opioids, which he’s called a public health emergency. In the past, he’s said he’ll roll out a “really tough, really big, really great” awareness campaign to battle the addiction epidemic, but we haven’t seen one yet. What the president probably won’t address is how the uninsured rate is creeping back up for the first time since the arrival of Obamacare, or how states can now require people to work in exchange for Medicaid.

The president will surely take credit for MAGA-ing the economy, specifically employment. He can legitimately point to:

However, average monthly job growth since Trump took office is lower than it was in the previous several years of President Obama’s second term. The pace of wage growth (average hourly earnings) has slowed since his inauguration — from 2.8 percent in February 2017 to 2.5 percent in December 2017.

The question is how is this mixed bag of progress on the jobs front a net improvement on the previous four years under Barack Obama? And how can job creation in the second year of the Trump presidency keep pace with the past year, especially as labor markets become ever tighter, immigration is reduced (starving the economy of new workers), and the opioid epidemic continues to take its toll on the domestic workforce.

President Trump will also tell the nation that manufacturing is on a tear. And in fact, 2017 was a very good year for manufacturing employment — up 184,000. But several years during the Obama recovery came close; and while the weak dollar has given U.S. manufacturing a boost in the past year, that won’t necessarily continue.

What I’ll be listening for is what is the Trump administration’s “industrial policy”? What plans are there to improve community college, apprenticeship, work-readiness, R&D; or to address the shortage of domestic workers manufacturers are concerned about? How will reducing immigration help manufacturers find the staff they need? How will manufacturing employers find enough workers in the coming years?

I will be surprised if education gets more than a cursory mention in the State of the Union. Education simply hasn’t been a top priority for President Trump, and much of the administration’s focus so far has been on unwinding Obama-era regulations and overseeing implementation of the new federal education law, the Every Student Succeeds Act.

We might hear a nod to school choice, vocational training, and possibly fixing schools as part of an infrastructure plan, but I don’t expect major education policy initiatives.

He’ll use the speech to make a big push for his immigration plan. Both Republicans and Democrats have issues with his proposal, which calls for providing a path to citizenship for so-called Dreamers, in exchange for a border wall, an end to family-based migration policies and a vast crackdown on undocumented immigrants.

I think the president will claim a victory for American jobs in his signing of tariffs for foreign-made solar panels. It could tie into his theme of American energy dominance. And it’ll be further backed by a competition recently announced at the Department of Energy to spur American solar manufacturing. What won’t be said is how many other solar jobs may be lost as a result of his actions.