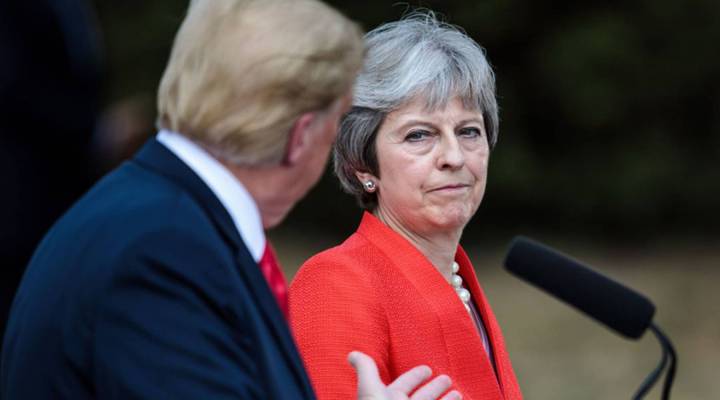 Prime Minister Theresa May’s heart must have sunk. As she waited for President Donald Trump outside Blenheim Palace — a magnificent 18th century mansion in Oxfordshire where she was hosting a banquet in honor of the president – the prime minister was told about an interview her unpredictable guest had given earlier to a British tabloid newspaper, The Sun. In the interview, he lobbed a metaphorical grenade into May’s most important policy and made remarks which one of her supporters described as “deeply insulting.”

The target of Trump’s attack was the British government’s latest plan for Brexit.

This is a very testing time for Prime Minister May. Her recently published blueprint for Britain’s departure from the European Union provoked an angry backlash within her own party.

Three ministers, including Foreign Secretary Boris Johnson, resigned. Two senior party officials also quit and some lawmakers from May’s own party accused her of betrayal. The critics claimed her plan would leave the U.K. in the thrall of the EU and make it difficult, if not impossible, for the country to strike free trade deals with major trading partners, like the U.S. after it leaves the bloc.

In his newspaper interview President Trump sided firmly with those critics. He accused May of “wrecking Brexit,” warned her that any attempt to maintain close ties with the EU would make a lucrative trade deal with the U.S. very unlikely; and, adding salt to the wound, he said that Boris Johnson would make a “very good prime minister.”

Even for Theresa May – who’s been buffeted and battered by Brexit since she lost her parliamentary majority in a disastrous election last year – Trump’s remarks must have come as a very bitter blow.

The two leaders appeared to make up at the Blenheim banquet and – at a joint news conference the following day – Trump dialed back on some of his remarks, saying that a U.S.-U.K. trade deal was “absolutely possible” and repeatedly describing the prime minister as a “terrific person.”

But the damage was done. Not least because, in spite of Trump’s widespread unpopularity in Britain, many Brexit-supporting Brits seem to agree with him about May’s plan.

“I think it’s much less likely that we’ll get a good trade deal or any trade deal at all with the United States if the current proposal that is being put forward by the PM persists,” said John Longworth, co-chair of the hardline Brexit group, Leave Means Leave.

Longworth accuses the prime minister of bungling the Brexit negotiations and even argues that Britain would be better off if Donald Trump were handling the talks on Britain’s behalf.

Veteran financial commentator Matthew Lynn is no fan of Donald Trump whom he’s described as “a blustering, dangerous buffoon.” But Lynn said May could learn something from the president’s tough approach to trade negotiation.

“Look at what he’s been doing with Europe, for example, on cars,” Lynn said. “The EU imposes a much higher levy on American cars than the American tax on European vehicles. He threatened to hike those American taxes and, guess what? Angela Merkel is suddenly talking about lower European tariffs. What that shows you is when you’re tough enough people will back down and there’s probably a lesson there for the U.K.,” Lynn said.

He said that Britain is one of the most profitable export markets for German cars and the second-largest wine market in the world and therefore, by threatening Trump-style to impose hefty new tariffs after Brexit, the U.K. could extract a better exit deal from the EU.

Many trade experts, however, insist that Trump’s approach – abandoning the multi-lateral, rules-based system — is not a good model for Britain to follow in the conduct of trade relations.

“Angela Merkel may have been talking about lower car tariffs but the EU is united on trade and determined to resist Trump’s actions on trade which it calls pure protectionism” said Agathe Demarais of the Economist Intelligence Unit.

And Emily Lydgate, an expert in trade law at Sussex University, also disputed that the Trump approach is effective and good for the U.S. economy.

“Most estimates are that more jobs would be lost than gained through Trump’s tariffs” Lydgate said. “Not only because of the impact on U.S. manufacturing but also because of retaliation by the U.S.’s trading partners.”

Tens of thousands of Brits, up and down the country, have been protesting President Trump’s presence in the U.K. for a wide variety of reasons. Their placards allege that the president is racist, Islamophobic, misogynistic and a warmonger. Some 50 percent of Brits – according to a recent poll — are unhappy about his visit. You have to wonder whether that might now include May.

Certainly, she seems unlikely – in the next phase of the Brexit negotiations —  to follow Trump’s hard line example.