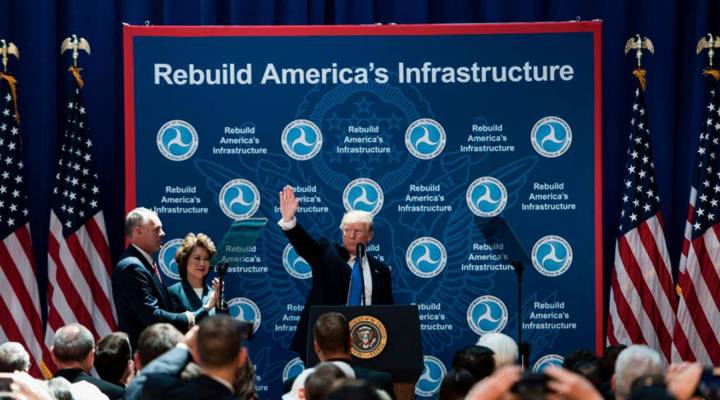 It’s like a perennial that pops up in the dead of winter — President Donald Trump’s reference to infrastructure in the State of the Union:

“I know that Congress is eager to pass an infrastructure bill and I am eager to work with you on the legislation to deliver a new and important infrastructure investment, including investments in the cutting-edge industries of the future.”

Rick Geddes, a professor of Policy Analysis and Management at Cornell University and founding director of the Cornell Program in Infrastructure Policy, joined Marketplace Morning Report host David Brancaccio to discuss the prospect of investment. The following transcript is an edited transcript of their conversation.

David Brancaccio: Well here you go, the word infrastructure, not once but twice in a long sentence. Professor Geddes, you toil in these fields. Do you think the money is finally coming to get this work done?

Rick Geddes: I think there will be some more money coming to get this done. I think a lot of us were expecting some other policy details to be laid out, which might be new sources of funding and financing, including more private investment in infrastructure and how you might do that. So it was sort of surprising that there was so little time devoted in the State of the Union to the infrastructure policy issue.

Brancaccio: I mean, he did say investing in “cutting-edge industries of the future.” I guess that’s a little nebulous. Now the Trump administration, you mentioned this, favors public-private partnerships for some of this. Government subsidizes but private companies put up capital and get a cut of income that might be generated. You think that will really take hold in the coming two more years?

Geddes: I do. And I think that there’s bipartisan agreement. The folks in the U.S. Department of Transportation under the Obama administration worked heavily on public-private partnerships as well. The United States, frankly David, I think is about 20 years behind most of the rest of the developed world in using public-private partnerships. A big part of any bill would be encouraging state and local governments, and keep in mind this is really a state and local government issue, encouraging and helping state local governments to innovate in the way they deliver projects.