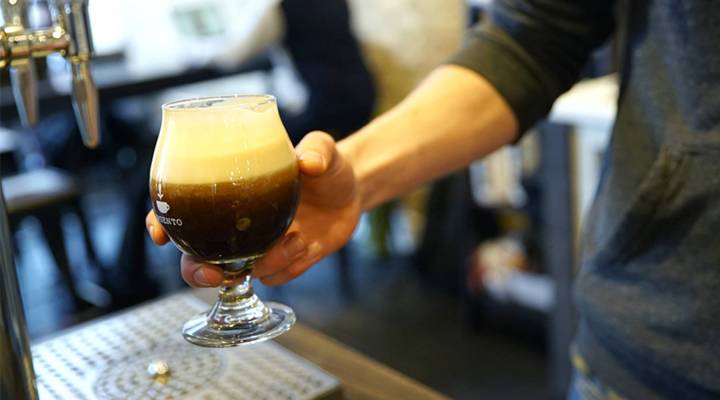 COPY
Cold brew sales surged more than 500% from 2011 to 2016, according to the National Coffee Association. Renata Sago/Marketplace

Cold brew sales surged more than 500% from 2011 to 2016, according to the National Coffee Association. Renata Sago/Marketplace
Listen Now

At Ipsento 606, an indie coffee shop in Chicago’s Bucktown neighborhood, customers can order sandwiches named after celebrities (like the Prince, for example: peanut butter, banana, honey, and coconut on oatmeal bread). They can grab fresh-roasted coffee beans, hot teas, espressos, and the typical assortment of hot drinks. Then, like at just about every joint these days, they can grab a cold brew. The drink, unlike regular hot coffee on ice, is steeped at room temperature, strained, and chilled. Ryan Meliker, a twenty-something coffee aficionado visiting from Denver, said he started drinking cold brew as mere solace from summer humidity during a stint working on the East Coast. Now, for him, the drink is more about a mouthfeel.

Changing tastes of millennials like Meliker are driving a boom in cold coffee sales. Cold brew sales surged by 580 percent in the U.S. from 2011 to 2016, according to a Mintel report.

One of the hottest cold-brew coffees on the scene is called nitro, a velvety drink which can be seen cascading from taps at coffee shops. Nitro is cold brew infused with nitrogen to produce a frothy, creamy top.

Stephen Metzel, nitro production manager at Ipsento said he flash chills the drink in a nitrogen coated-keg. He keeps a fresh batch on tap year round, brewing up to 30 kegs in the summer and fewer in the winter. He said the drink has been popular since Ipsento opened about two years ago, with clients flocking to the drink because of its cold temperature, convenience, and caffeinated kick.

Stephen Metzel keeps a fresh batch of cold brew on tap year-round at Ipsento 606 in Chicago.

“There’s people that get it every week,” Metzel said.

“We just deliver a keg for them, hook it up, and they can have a tap in their office and then grab themselves a cup of coffee,” he said.

Starbucks is all in on nitro now.  The company announced plans to roll out the drink in all of its stores by the end of the year.

The coffee industry has discovered that nitro and other cold brews appeal to people who don’t normally go for coffee, according to beverage industry expert Tom Vierhile, who said new drinkers appreciate cold brew’s smooth and sweet taste. Traditionally, summer coffee sales are slow, but in recent years they’ve seen a surge thanks to cold brew, particularly packaged bottles of the drink.

“The market has kind of become a free for all,” Vierhile said. “A lot of these newer products are promoted as energizing beverages and that’s certainly a big plus for packaged cold brew coffee.”

A variety of cold coffee beverages are shown on a shelf at the Alameda, CA Target store in January 2019.

Cold brew comes a range of flavors, from the traditional Ethiopian and Colombian blends to unusual kinds like lemonade and peppermint mocha. Coca-Cola now sells bottled cold brew through a partnership with Dunkin’. Bottles of cold brew lines the shelves of major retailers like Walmart, Target, and Whole Foods. Fast food chains are also beginning to hop on the cold brew train. At McDonald’s, the drink is marketed as “cold, strong and smooth.”

According to Vierhile, cold-coffee sellers are benefiting from consumers turning away from drinks they see as unhealthy.

“Cold brew coffee is the type of drink that can really replace a carbonated soft drink as well as an energy drink,” he said. But he warned that different packaged cold brew products can have “wildly different caffeine levels,” citing Wandering Bear cold brew which was recently introduced to the market with 275 milligrams of caffeine in an 11 oz. carton.

The National Coffee Association reported in 2017 that cold brew has potential to become an even bigger chunk of the $48 billion coffee market in the U.S.

“It’s just a matter of catering now to people’s tastes,” he said.

Meliker, the cold brew aficionado from Denver said he looks forward to that day when there are even more cold brew options than now.

“Variety is the spice of life. Let everybody make it. Let’s see who can do it the best,” he said.

Some coffee businesses are now looking past coffee to capture more of the cold drinks market. California coffee chain Peet’s just invested $7.5 million in a company that makes Kombucha, the tangy, fermented tea.