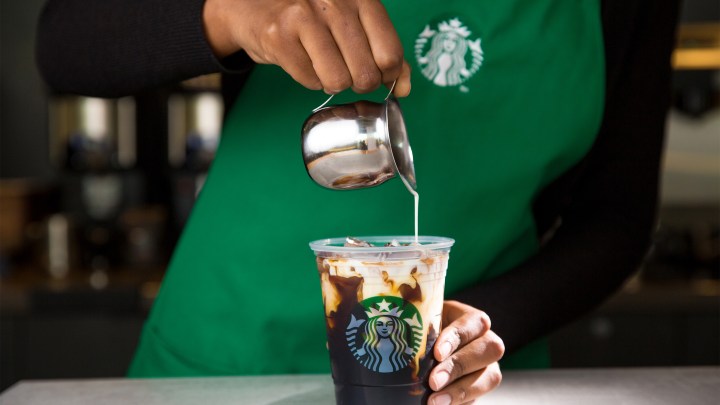 COPY
Offering something customers typically don't want in the morning hours, like iced coffee, is one way to draw in customers. Courtesy of Starbucks

Offering something customers typically don't want in the morning hours, like iced coffee, is one way to draw in customers. Courtesy of Starbucks
Listen Now

Starbucks revealed better-than-expected earnings for its last quarter, ending in December. Sales of cold beverages like its nitro cold brew have been particularly hot, giving a jolt to afternoon sales — typically a sleepy time for coffee joints and many restaurants.

Getting consumers to spend between lunch and dinner has been a perennial challenge for restaurants, according to consumer strategist R.J. Hottovy with Morningstar.

“Traditionally speaking, it’s been more some sort of coupon or discount to drive people back in the afternoon,” he said.

Starbucks tried that approach for a while, offering discounts to morning customers if they returned the same day. But it wasn’t all that effective until the coffee purveyor found that sweet spot for menu items with special appeal in the afternoon.

“It’s the idea of snacking,” said Alex Susskind, a professor of food and beverage management at Cornell University. He’s seen a rush by restaurants in recent years to better cater to the growing appetite for small bites and pick-me-ups.

“It has to be something that they maybe can’t normally get, or [that] they wouldn’t normally get in the morning or the regular evening period,” he said.

That could mean anything from iced and blended coffee drinks to limited edition fast-food offerings like Dunkin’s donut fries or Burger King’s “Mac n’ Cheetos.”

On the other end of the spectrum, health and wellness foods are also driving afternoon sales, said Trevor Boomstra, a restaurant industry consultant with Alix Partners.

“You see fizzy tea drinks being popular and cold pressed juices as well,” he said. “Sometimes energy drinks, when people are looking for that recharge in the afternoon.”

That’s exactly where Starbucks had success: offering that hit of afternoon energy with cold brews.

Boomstra added that even if retailers can’t get people into stores in the afternoon, they can now increasingly bring the stores to consumers with mobile ordering and delivery.