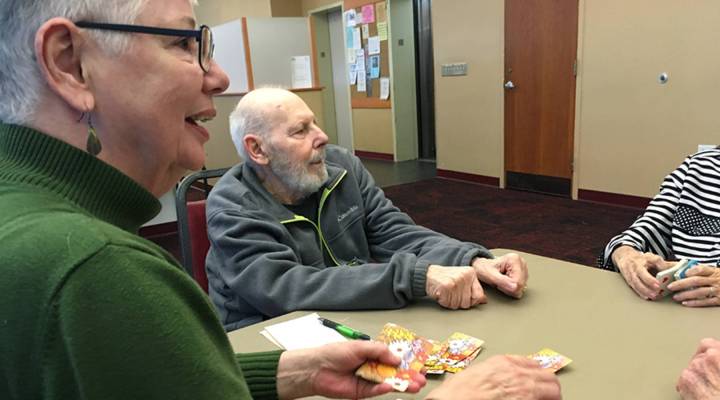 COPY
Kathy Stevens, 67, plays bridge with friends at Riverview Towers in Pittsburgh. Stevens lost about a third of her savings during the financial crisis in 2008. It set off a decade of scaling back and she now lives in subsidized senior housing. Erika Beras/Marketplace
Divided Decade

Kathy Stevens, 67, plays bridge with friends at Riverview Towers in Pittsburgh. Stevens lost about a third of her savings during the financial crisis in 2008. It set off a decade of scaling back and she now lives in subsidized senior housing. Erika Beras/Marketplace
Listen Now

A high-rise for seniors isn’t where Kathy Stevens, 67, expected to live at this point in her life. Her place has a small kitchen and living area and an accordion door she can pull to close off the space where her bed stands. She pays $840 a month in rent, which includes utilities and a daily dinner.

She says the apartment is fine. But after getting an MBA from Harvard University, a long career in financial services and saving about a million dollars in a retirement account, she expected to have a more comfortable retirement.

“I did all the right things. I saved my money. I didn’t waste it on you know a big big house or big car or whatever,” she said.

Along the way she raised two foster sons and supported them into adulthood, using some of her retirement savings to help them go into business. She was also planning to send her grandchildren to college. Then, in 2008, the financial crisis hit.

“And now all of a sudden you know like 35 percent of my money is just gone — like vanished. It was really bad. It was shock. There’s no other word for it. It was a shock,” she said.

The economic collapse was a shock to nearly everyone. Millions of people lost their jobs and their homes. It would take years for many of them to recover, if they recovered at all. But for those closest to retirement, or who were pushed out of the workforce early, “It meant that you never had the time to make that up,” said Teresa Ghilarducci, an economist at the New School for Social Research. She said the reality for nearly half a generation of newly minted seniors — and those on their way, “is that you are downwardly mobile.”

Or worse. The number of seniors filing for bankruptcy has nearly doubled since 2007 to a record high of 12 percent, part of it driven by the financial crisis; another part by mounting debt for things like medical care, mortgage loans and credit card bills.

While bankruptcy can be a fresh debt-free start, “the pickle is for older people that’s highly unlikely,” said Deborah Thorne with the Consumer Bankruptcy Project. She said that on top of the financial crisis, seniors were also confronting another fundamental shift in the economy as managed pensions gave way to 401(k)s, where individuals manage their own retirement savings.

“This is the generation where we’re really seeing the fallout from the transition to individuals being responsible for that,” she said, because it’s a skill to know how much to save and “when they’re supposed to withdraw and what amount. And I think that most people don’t know how to go about that.”

Take Larry Testerman, a 73-year-old air force vet. He had a successful career in marketing and put two sons through college. But in the early 2000s, he was laid off from an $85,000 a year job and got divorced. He was also caring for his ailing mother.

“I probably was not able to look after my investments in my retirement accounts as I should have should have been and perhaps should have just sold them all out promptly when things started declining,” he said.

He lost half his retirement savings and went back to work, stocking shelves at grocery stores. But he still couldn’t make his mortgage payments. His Arizona condo wasn’t worth its pre-crisis price and it went into foreclosure. Now, he drives a shuttle bus at a ski resort in Utah for $10.60 an hour and spends part of the year in employee housing.

“The space that I’m living in is a room that has a bathroom and a set of bunk beds in it with me sleeping on the bottom and other person sleeping on top,” he said.

Lots of Testerman’s co-workers are around his age. These days nearly 20 percent of seniors work part-time, low wage jobs — a number expected to rise.

And when that day comes; a social safety net system that didn’t expect a generation of once middle-class people to need help with food, housing and services will be strapped.