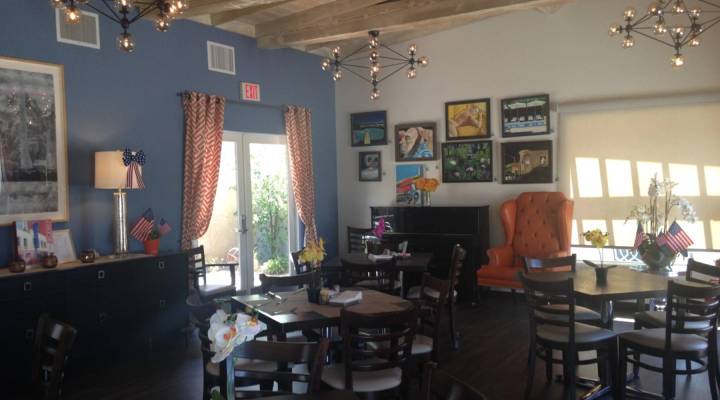 With the nation’s senior population expected to double in the next 20 years, there’s a growing need for senior services.

One niche: the millions of LGBT baby boomers who came from an era when equal rights were only a dream.

A new community in Palm Springs is a sign of the changing times.

Lauren Kabakoff toured a visitor around the resort-style property her family owns.

When they bought this place a few years ago, they upgraded it with a very specific use in mind: to convert it into an assisted living facility for senior citizens from the LGBT community.

To commemorate history, they called it “Stonewall Gardens,” after the pivot point in the fight for gay rights in the ’60s.

Kabakoff’s family saw an opportunity in the growing market for elder services, particularly in Palm Springs, which has a large gay community.

Jim Crowley outside his apartment at Stonewall Gardens.

Jim Crowley was one of those people.

At 77, the retired teacher from Minnesota found himself suddenly needing that assistance.

“I wasn’t looking for any place,” Crowley said. “I certainly wasn’t going to end up in an old person’s home. But then I started falling. And I found out I have a rare form of Parkinson’s.”

That meant for Crowley, living alone was no longer an option.

Besides the 24/7 care and attention he can get at a place like this, he was attracted to the mountain views, the ability to come and go as he pleased from the property and, most of all, the fact that he doesn’t have to explain himself.

“We’re all gay and that actually makes a big difference. Almost every gay person has a secret part of their life that they don’t share. So, you always had to be careful who you’re talking to. And so here, that’s very free.”

That freedom to live openly is particularly welcome for Crowley at this stage of life. It gives him comfort, he said, as he deals with aging’s ups and downs.