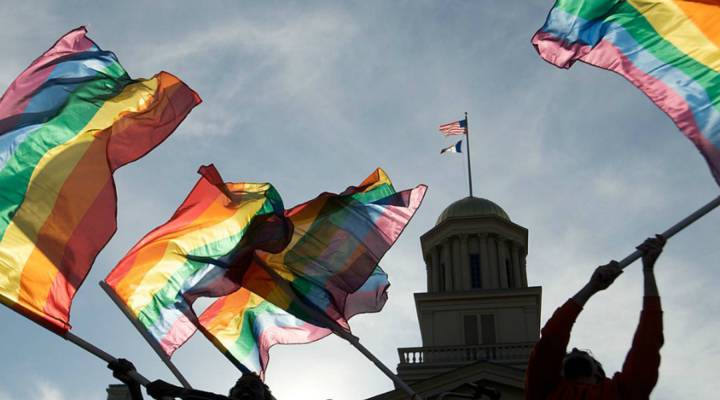 COPY
Gay, lesbian and transgender activists react to the Iowa Supreme Court's decision to recognize same-sex marriage as a civil right back in '09. David Greedy/Getty Images

While the courts have legalized same-sex marriage, many other protections for LGBT people are not settled in law — including whether or not an employer can fire an employee for being gay or lesbian.

There’s movement on this issue after a federal court ruling that the Johnson-era Civil Rights Act also applies to sexual orientation.

Gillian Thomas, a senior staff attorney at the Women’s Rights Project at the American Civil Liberties Union, joined us to talk about the organization’s progress on the issue. Below is an edited transcript.

David Brancaccio: The Civil Rights Act, the legendary one from the Johnson era, protects against discrimination on the basis of race, sex, age, religion, national origin. But it’s new for the courts to include protections for sexual orientation?

Gillian Thomas: That’s right. It was the Seventh Circuit Court of Appeals out of Chicago in April in the Hively case involving a teacher who was fired. And the court —  the full 7th Circuit, all of the judges and not just the usual three-judge panel — found that sex within the meaning of Title VII of the ’64 Civil Rights Act does necessarily include sexual orientation.

Brancaccio: And there are some other cases that are working their way through that you also think will inform us.

Thomas: There’s a great deal of momentum in favor of updating our understanding of what sex is under the ’64 act. And so there’s a petition pending for the entire 11th Circuit, in the case of a lesbian security guard who says she was fired for her sexual orientation. And then I’m counsel along with my colleagues and private attorney Janice Goodman here in New York. We have a petition also asking the full 2nd Circuit, and ours is actually one of four petitions, so we’re very hopeful that they’ll decide this is the time to update the law.

Brancaccio: What do these cases mean for the rights of transgender people?

Thomas: Discrimination on the basis of gender identity has actually had better success in the courts — somewhat surprisingly given all of the outrage around transgender folks in public accommodations, such as the whole bathroom controversy.

Brancaccio: In other words, compared to people who are gay, transgender people, the courts have found, may be more protected.

Thomas: At least four appeals courts have found that gender identity discrimination is a form of sex discrimination, and dozens of district courts at this point have as well. And I think what we have to thank for that is a decision that came out of the Supreme Court in 1989 under Title VII, involving a woman who was straight but failed to conform to traditional notions of what’s feminine. She used foul language. She didn’t wear makeup. And in that case, the Supreme Court said it’s just as much sex discrimination to deny a woman an opportunity because she’s the wrong kind of woman as it is to say we don’t promote women at all. And so transgender individuals and employees have found solace within that specific directive from the Supreme Court.