It is Pride Month and the 50th anniversary of the Stonewall uprising, which was a key turning point for the gay rights movement. This month, there are pride celebrations in cities across the United States commemorating that uprising. There is also a lot of very visible support from corporations and other businesses. LGBTQ groups have worked hard for decades to gain that acceptance, but now some are asking if there’s such a thing as too much.

June 28, 1969, 20-year-old Dale Mitchell and his boyfriend were walking down the street through the West Village in New York.

“We saw up ahead a bunch of flickering blue police lights,” he recalled.

The police were raiding the Stonewall Inn, as they often did, harassing the clientele for being gay or gender-nonconforming.

“The police were carting off the patrons to a nearby paddy wagon, three drag queens if I remember correctly; the police particularly liked to pick on drag queens. One of them broke free and she said, ‘Come on, you faggots, let’s riot!’”

They did, and after that uprising, something changed in the gay rights movement. It became louder. Pride marches and celebrations across the United States were set up to commemorate Stonewall. Eric Marcus, a historian who hosts the “Making Gay History” podcast, remembers one of his first pride celebrations in 1980, emphasizing that these were protest marches without much mainstream support.

“Because gay people were sick, sinful, disgusting, horrible, illegal people, nobody wanted to be associated with gay people, and no corporation, no company selling things other than perhaps a bathhouse would advertise to gay people. No, it was laughable,” he said.

That changed. Parades now feature all manner of corporate floats.

“I think it’s great! I think it’s terrible!” said Marcus, laughing. “I live in Chelsea in Manhattan, and last year I saw a float go by with a rainbow-painted outdoor patio chair, and it was for a patio furniture company, and I thought, ‘This has just gone too far!’”

Last year’s New York Pride had more than 100 floats and 550 contingents, including corporate sponsors and small businesses. The business presence and LGBTQ-oriented advertising generally feels exploitative to people like Robin Scott, who tried to march in one of New York’s pride parades last year with a nonprofit group.

“We were supposed to step off at 2 p.m., and at 6 p.m., we still hadn’t left, and I’d spent four hours just circling behind an inflatable Chipotle burrito,” she said. “It was just advertising, and the whole parade was choked with it.”

That’s one reason this year Scott is marching in an alternative pride parade in New York, the Queer Liberation March.

“Mostly there will just be people, no corporate floats, nothing like that,” said Ann Northrup, one of the organizers. “We’ve even had a few politicians who want to march with us, and we’ve had to tell them, “Look, this is just not the place for campaigning.”

Northrup is concerned that some corporations are just using LGBTQ images to make themselves look better, something she calls pinkwashing. At the same time, Northrup readily acknowledges that corporations have been critical to promoting LGBTQ causes — nondiscrimination policies, domestic partner benefits before gay marriage was legal, for example. More recently, many businesses opposed the bathroom ban in North Carolina that targeted trans people.

“Wells Fargo has been committed to the LGBTQ community for just over 30 years now, it goes back to 1987, when we first incorporated sexual orientation in our nondiscrimination policy,” said John Lake, a vice president and LGBT segment leader for Wells Fargo Marketing. “Our participation in Pride actually goes back 25 years, we’ve been involved with pride events since 1993.”

Lake said Wells Fargo has donated $50 million to LGBTQ charities and advocacy groups over the last 30 years, and echoes the views of many critics of corporate sponsors in saying that companies that use LGBTQ imagery or marketing should put their money where their mouths are, so to speak.

While corporate visibility may be the norm in some large cities, Lake believes there are places where it still makes an impact.

“Where the visibility really I feel matters is in smaller communities around the country — you know, we’re in places like Sioux Falls, South Dakota, and Winston-Salem and Anchorage, Alaska, and I feel like our visibility there means so much.” 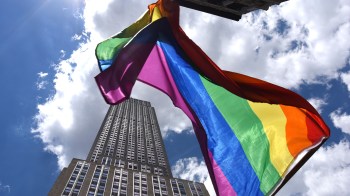