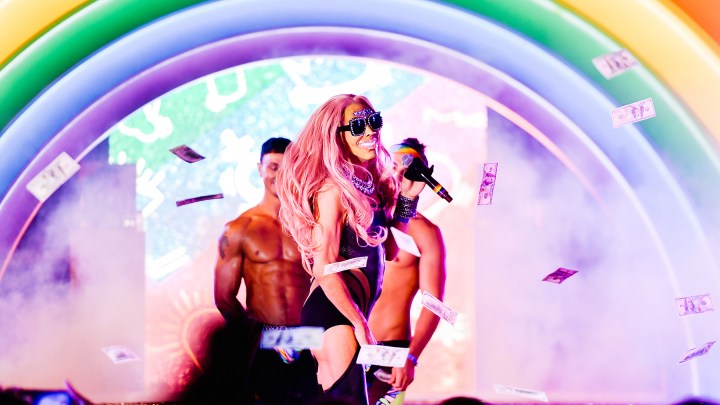 Temperatures are rising, grills have been rolled out of storage and rainbow flags are visible at every turn: Pride month is in full swing.

2019 marks the 50th anniversary of New York City’s Stonewall riots. In the years since, the experience of living as a queer person, and the way that’s celebrated, has dramatically evolved.

Among the 88 cities that make up Los Angeles County are Compton and West Hollywood, both full of rich history and both, lately, offering two different examples of the shape LGBTQ Pride can take.

“We are the stewards keeping this history alive”

Minutes away from the heart of Hollywood sits the home of one particular brand of Pride — one with a 49-year history. From Santa Monica to San Vincente to Robertson Boulevard, Los Angeles Pride is held every June.

Today, ticket sales for the event are at an all-time high, selling out last year with crowds of about 40,000 people. High-profile sponsors include Bud Light, Delta, T-Mobile and MAC Cosmetics. This year’s Pride parade hosted more than 170 groups.

But LA Pride didn’t always look like the star-studded, corporate-backed, glitzed-out event it is today.

In 1970, in response to the previous year’s riots at the Stonewall Inn in New York City, Christopher Street West was determined to march through the streets of Hollywood.

The first organizers faced pushback from the LAPD, which expected violence at the event. A case went to court and, citing constitutional rights to freedom of expression, CSW won the right to march through the streets of Hollywood.

“LA Pride has always sought to make sure that every year we celebrate the accomplishments that we have achieved,” Estevan Montemayor, LA Pride board president, told Marketplace. “But also, that we never forget what else we still need to fight for — we are the stewards keeping this history alive.”

What has all of its growth amounted to? According to economic data from the city of West Hollywood in 2016, LA Pride was estimated to have an economic impact of more than $37 million across the Los Angeles region, and more than $9 million for the city.

Next year marks the event’s 50th anniversary, and Montemayor expects the celebration to be the biggest yet. But he has also thought about the ripple effect of the celebration and, as it expands, what it really means to the community in this day and age. He is often asked whether Pride is still relevant. His response?

“Of course it’s still relevant, and it’s become even more relevant, because our visibility is at an all-time high,” Montemayor said.

“We often think about the trans woman halfway across the globe that is seeking help and inspiration to live her authentic life, and the images of us gathering, the fact that we are gathering and celebrating, really, is so important because it does give those individuals across the country and across the globe hope.”

“A lot of people thought I was crazy”

It wasn’t until Compton College agreed to host that Princess Murray started to receive support for a Pride celebration in Compton. Up until then, she had been met with concern and hesitation in response to her big idea.

Decades have passed since she rode the bus with her friends cross-county to West Hollywood for LA Pride celebrations, but she still remembers the experience today.

She remembers sneaking in — Murray couldn’t afford to pay the ticket price for the event. And after getting past the fence, she and her friends would spend the whole day at the festival, often going hungry.

It became a dream of Murray’s to one day organize an event that was open to all who wished to attend, free of financial barriers. Today, more than a year after she first pitched the idea to colleagues, that dream has become a reality.

Twenty-two miles away from West Hollywood, the city of Compton is about to hold its first LGBT Pride celebration.

More than 100 organizations have committed to setting up stands across Compton College, including the ACLU of Southern California, Kaiser Permanente, Planned Parenthood and the Black AIDS Institute.

She said that’s what Pride is all about for her and her team of 80 volunteers — creating an accessible experience, one she wasn’t afforded as a young queer person.

Part of that goal, Murray explained, requires the creation of a space where people of all backgrounds and races can feel seen — she singles out black and brown bodies in particular.

“Racism still exists, homophobia and transphobia still exist within the African American and Latino communities,” Murray said. She believes hosting an event like Pride in a community like Compton is important.

“African Americans and Latinos and minorities have always been a significant part of the LGBTQIA movement,” Murray said. “Compton is easily underestimated and marginalized, just like LGBTQIA youths, [with] a lot of stereotypes that [no] longer exist … because they aren’t visible.”

It’s not just about Compton, said Murray, pointing out that cities like Watts and Inglewood are just as important to include. She believes the event is for the entire community.

Unlike its counterpart in West Hollywood, Compton Pride won’t be selling tickets to attend. Murray encourages visitors of all ages, as well as families, to attend the free event, which is both alcohol- and drug-free.

“It’s not about a competition, and it’s not about whose Pride is better,” Murray said. “We’re here to help people and provide resources for people who need them.”