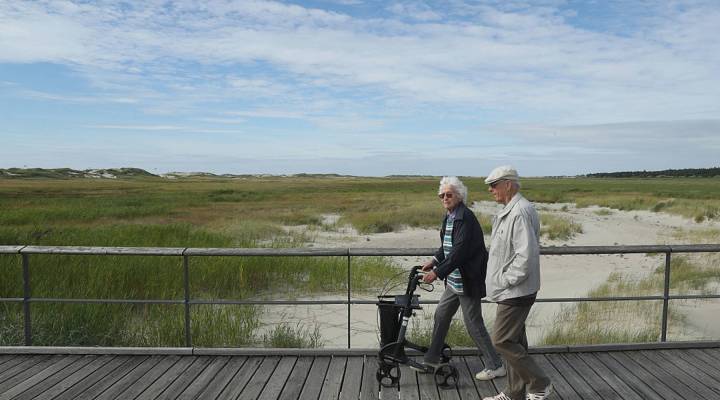 COPY
An elderly couple walk along a wooden walkway on vacation in Germany. Sean Gallup/Getty Image

Try a quick image search on the Internet for the word “retirement,” and you’ll get sandy beaches, sunsets, and big smiles. Those images might be a little dated: most people’s retirement outlook these days is not quite so sunny.

In fact, the median amount working-age Americans have saved for retirement is $3,000. That means half of U.S. households have little to no money saved.

There are a lot of factors going into that: one is shift over many decades away from defined-benefit pension plans and towards individual contributions into 401(k)s, which have varying levels of contributions, participation and returns. In a recent report, the Economic Policy Institute showed 401(k)’s primarily benefit the wealthiest families for a variety of reasons. And, the Great Recession took a big bite out of family wealth, which has been slower to return to low-income households.

Now more than half of U.S. states have either passed or are considering bills to create state-run retirement plans; Connecticut and Maryland were the most recent this year.

“States and cities are the first line of defense on this crisis,” said Teresa Ghilarducci, a professor of economics at the New School. She says local governments will end up picking up the tab on everything from emergency housing to health costs as seniors realize their Social Security benefits can’t cover all their needs. Low- to middle-income people and blacks and Hispanics are the least likely to have any savings at all.

“To leave them high and dry without an option is really not an option, at least from a government perspective,” said Kevin Lembo, Connecticut’s state comptroller. He worked to pass a state-run retirement fund which is now in the planning stages. It will require most private companies to offer some plan, which most affects small businesses–large companies usually already have something. Connecticut’s law automatically enrolls employees, but allows them to opt out of investing; employer contributions are also optional. A government board appointed by elected officials will oversee management of the collective funds.

That’s what Republican state Sen. Len Fasano has a problem with.

“Government controlled, government invested and government oversight…as long as government keeps their hands on it, I don’t know if anybody’s safe,” Fasano said. Republicans in Connecticut proposed a state system closer to the one being rolled out in Washington, which is creating a state-run marketplace to assist individuals with signing up for private plans.

He says if people want to invest, that should be a choice.

The trouble with that, says Teresa Ghilarducci, is that individual options like 401(k)s and IRAs can be confusing and risky–they may put people in charge of their own investment strategy with the information they need to make a good decision. She’s pushing for federal reforms and ultimately a federal retirement fund, but she thinks state laws are a good stopgap.

“If states could build a time machine so all their citizens could go back ten years and start saving then, that would be a big help,” Ghilarducci said.

Of course, people have their own solution: in a 2014 survey by the Federal Reserve, almost 40 percent of Americans said their retirement plan is to keep working, or that they don’t have a retirement plan.