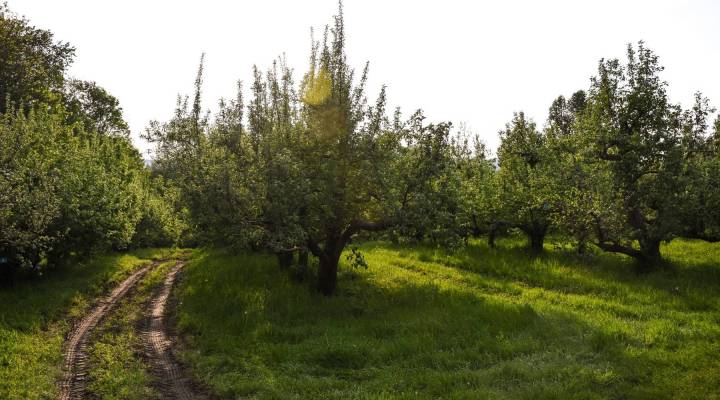 There’s something new at New Hampshire’s state-run liquor store in the city of Lebanon. Down the aisle from the Cabernet and the Bordeaux, next to the ports and sherries, there’s a section labeled “Heritage Cider.”

On the shelves are brands like Milk & Honey of Minnesota, Castle Hill of Virginia and Stem of Colorado. Unlike some of the most popular cider sold in the United States, they’re not made from juice concentrate, or “back sweetened” with juice after fermentation.

This is the first major liquor retailer, nationally, to label a special section for these higher end ciders, according to the United States Association of Cider Makers.

Nicole Brassard Jordan, with the state Liquor Commission, said she’s thrilled with the change. She recently toured the new display, one of several in the state, with a local orchard owner named Steve Wood, a major force behind the idea.

Wood has been making cider for decades. For most of that time, though, despite positive reviews from outlets like The New York Times, he’s struggled with sales. At the beginning, the market just wasn’t there, he said, virtually no one was drinking hard cider.

Then, about five years ago, things started to change. Cider sales were jumping. “I thought – okay, now we’re rolling,” he said. He invested in a big, new building so he could start churning out more and more product. Cider sales nationally doubled, then tripled — today it’s a more than $1.3 billion market. But Wood’s sales stayed much the same.

The ciders that were doing well, and still are, are different from the kind of cider Wood makes. For one, they’re cheaper — around $9 for a six-pack. Wood sells his wine-sized bottles for about $15 each.

That price difference comes down to the cost of the raw materials, the apples.

Ben Calvi, of Woodchuck, at the brand’s production facility in Middlebury, Vermont. The vast majority of his cider, like most cider sold in the United States, is made from apple varieties sold in supermarkets, like McIntosh or Honeycrisp.

Most cider sold in the United States is made from supermarket apples, like McIntosh or Honeycrisp. Cider makers like Vermont Cider Company, known by its flagship brand Woodchuck, rely on buying leftover apples that don’t get sold to a profit for a store, said Ben Calvi, the company’s general manager.

Meanwhile, other cider makers, like Wood at his orchard in New Hampshire, are using more esoteric apple varieties grown specifically for cider making, like Golden Russet and Porter’s Perfection. The resulting ciders are often higher in tannins, with a drier, more complex taste.

Calvi, by the way, supports highlighting these heritage brands. He actually makes a small amount of ciders this way himself. “It keeps things interesting – it keeps our fans engaged with what are we coming out with, next,” he said.

The challenge now, though, is consumers have come to associate “cider” with a sweeter, lower alcohol drink, and some have written it off all together. This trend is frustrating to Michelle McGrath, who leads the cider makers association, representing ciders at all price levels.

She and cider makers across the country have been trying to convince fans of higher end wines and liquors to give heritage ciders a shot. That includes Wood and others who are growing their own apples. For them, it could determine whether they can make it — not just as cider makers, but as orchard owners as well.