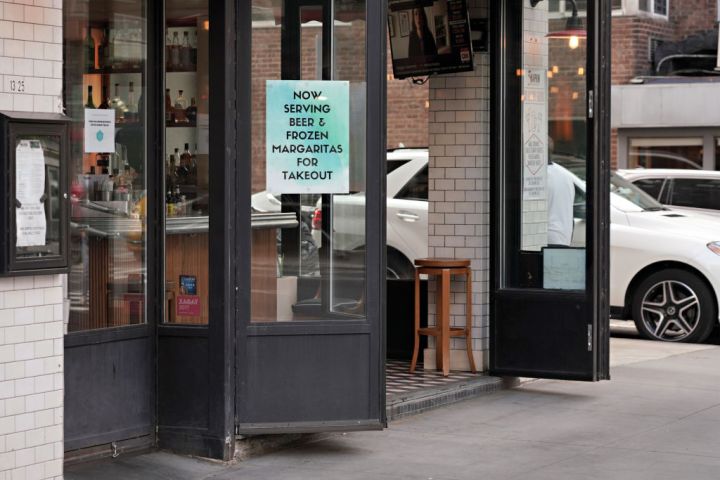 COPY
A sign in a restaurant window advertises beer and margaritas for takeout during the coronavirus pandemic in New York City. Cindy Ord/Getty Images

A sign in a restaurant window advertises beer and margaritas for takeout during the coronavirus pandemic in New York City. Cindy Ord/Getty Images
Listen Now

New York is the latest state moving to make alcohol to-go a permanent law. A number of localities started allowing bars and restaurants to sell takeout drinks during the early days of the pandemic when businesses were shut down. Historically tight liquor laws have changed during the pandemic.

Like a lot of restaurant owners, Kelly Bush has seen takeout become a bigger part of her business.

“We actually have somebody on Friday nights just doing the phones for takeout,” she said.

She owns two spots, Union Tavern and Marshall Street Bar and Grill in Rochester, New York. And up until June of last year, when it was legal to sell to-go drinks, alcohol made up a quarter of takeout sales.

“It was enough to cover our gas and electric bill. Like, little things like that were huge,” she said.

She said she can’t wait to put drinks back on her takeout menu if a new law allows the sale of to-go drinks to become permanent. And she’s not alone. Mike Whatley at the National Restaurant Association said takeout is here to stay. And if laws aren’t passed, restaurants will lose out on high-profit alcohol sales.

“Behavior is very sticky and people have trends and habits they’re going to keep and they like having restaurant food in the comfort of their home,” he said.

Currently, 31 states plus the District of Columbia have temporary or permanent to-go laws. Kevin Kosar is a senior fellow at the American Enterprise Institute and has written books about liquor history in the U.S. He said the past two years have seen some of the biggest updates to laws since prohibition.

“Changes to the drinks industry tend to proceed slowly,” he said.

He said arguments against loosening liquor laws aren’t usually about public health, but about competition within the industry. For instance, liquor stores have lobbied against restaurants selling to-go cocktails during the pandemic. But Kosar says in the long run, governments tend to relax liquor laws because they’re a boon to local economies.

“States are always hungry for more tax revenue,” he said.

Especially now. In the past several years, more states have also softened or abolished blue laws, which ban alcohol sales on Sundays.