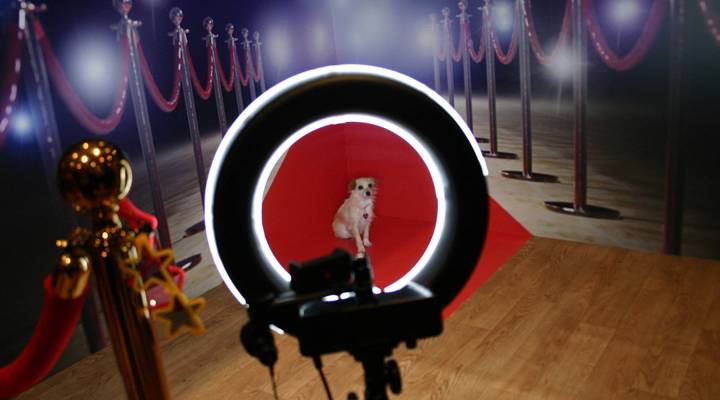 COPY
A dog poses for a portrait at the 2018 PetCon held at the Javits Center in New York City.    Jana Kasperkevic for Marketplace

A dog poses for a portrait at the 2018 PetCon held at the Javits Center in New York City.    Jana Kasperkevic for Marketplace
Listen Now

Stacey Small and Justin Ames had been dating just a month or two when he surprised her with tickets to the second annual PetCon, a gathering of celebrity pets, their owners and fans. Early on in their relationship, Small introduced Ames to her favorite pet celebrity: Tuna – an internet famous Chiweenie, a mix between a Chihuahua and a dachshund. Tuna has an overbite, wears clothes, has more than two million followers on Instagram @tunameltsmyheart, and is the reason why the couple had lined up with a few dozen other people inside New York’s Javits Center early on a Saturday morning.

“Oh my God, that’s Tuna!” PetCon attendees said as they passed by. Then they notice the line and add, “Oh my God, is that the line for Tuna?!”

Internet-famous pets like Tuna can draw thousands, if not millions, of adoring fans. With that kind of following, sponsorships and business deals are not far away. Just ask Loni Edwards, who is the founder and CEO of the Dog Agency – the first talent management agency to focus on pet influencers. Her team of six manages about 160 different pets, including pigs and monkeys, helping their owners turn their cute photos and videos into cold hard cash. Some posts can easily bring in thousands of dollars each.

Pet lovers are a huge market. There are almost 90 million dogs in the U.S. And all those dogs need things like collars and leashes and food. American Pet Product Association estimates that Americans will spend $72.13 billion on their pets this year. Even if just a fraction of that is spent on items that consumers saw on Instagram, that can still translate into millions of dollars in sales.

Fourteen-year old Alyssa Farley said that seeing products featured on pet Instagram accounts inspired her to “check them out” and sometimes to even hit the add-to-cart button. Among the things she bought for Peaches, her Chihuahua, are leashes, collars and things to carry her in like the K9 Sports Sack.

“There’s a few things that I want to get for her that I’ve seen and I’m like ‘Oh yeah, that’s cool,’” Farley said. “I’ve got some of the things but then there’s more things because, you know, I have to spoil her.”

She and her mom, Shirl, traveled from Maryland to spend the day at PetCon. They woke up at 4 a.m. and were on the road by 6 a.m. Peaches, who can be found on Instagram at @peachesthechi, traveled with them. She has more than 5,000 followers.

“She has more followers than I do!” Shirl said, when she hears the number.

And while 5,000 followers is quite a lot, it’s not enough for Peaches to really qualify as an influencer. In order to be considered as a potential client by The Dog Agency, your pet would have to have at least 50,000 followers. At that level, influences can get around $1,000 a post, Edwards said.

It’s not just brands that make pet products that would pay a cute furry creature like Peaches to be the face of their company.

“The majority of the brands we work with are actually human-facing brands that don’t have pet products, just because the brands’ consumers love pets,” explains Edwards. “They think of their pets as their children and by working with a pet influencer, they are showing that they have the same values and it really resonates with a consumer on a deeper level.”

It also helps that ads featuring pets doing human things like reading or pushing a vacuum cleaner are cute and memorable.

Laura Van Der Maas and her dog, Cavalier Chloé, traveled to New York all the way from the Netherlands in hopes of learning the tricks of the trade so that one day they too could partner up with brands for ad campaigns. Chloé already has 22,000 followers on Instagram. She also has her own website and email.

“I figured I really want to see if I can make her my full-time job because this is what I want to do. She’s the most important thing for me,” said Van Der Maas, who currently works in hospitality. Wearing a sweatshirt embossed with “Dog Mom AF,” she had her phone are at the ready as Chloé palled around with a French bulldog called Izzy, who has 117,000 followers on her instagram account @izzythe.frenchie. Her two dog dads, Rick Hendrix and Shane Jordan, were retired before Izzy went viral but they describe her as their “full-time hobby.” The get daily offers for partnerships and field between 800 to 900 emails a week. Fame, it turns out, is a lot of work for both the pets and their owners. And fans demand a steady stream of original content from the accounts they follow.

“I feel like we have to constantly keep something up, just to keep the followers happy,” Jordan said. “Usually, we will have people messages us and they are like: ‘OK what’s going on with Izzy? Why haven’t you posted a picture?’” Ever since Izzy came into their lives, there are no days without screens. They try to post something new each day as well as interact with their followers in the comments. “That is a little taxing just because you’re like: ‘OK, I need a break.’ But it’s hard because you don’t want people to feel like that if they post that you’re not engaging with them,” adds Jordan.

That also applies to in-person engagement – like the meet-and-greet with Tuna.

Throughout the morning, fans continued to line up for a chance to meet their favorite Chiweenie. Many even bought the $12 calendar that was on sale, each stamped with Tuna’s paw print and covered with a yellow Post-it to avoid smudging. After handing Tuna to each adoring fan, her owner would move to stand behind the person taking the photo and wave her hand or point, trying to get Tuna to look into the camera.

Finally, almost two hours into the meet-and-greet, a Javits Center employee was assigned to stand at the end-of-the-line and make sure no more people would line up. Hundreds of photos later, Tuna needed a break.