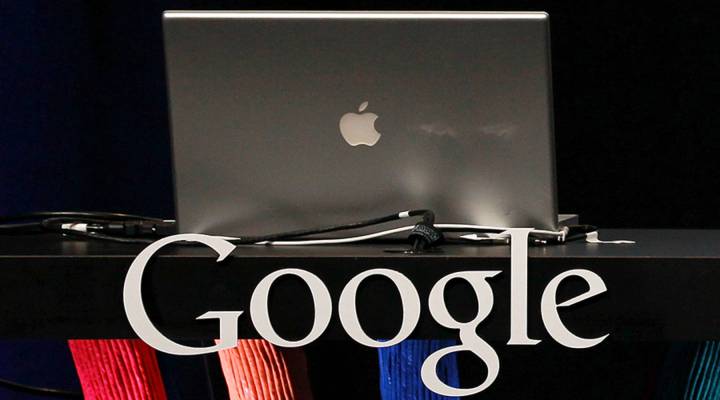 COPY
An Apple laptop sits on a podium with the Google logo during a Google special event in 2010 in San Francisco. Justin Sullivan/Getty Images
Marketplace Tech Blogs

An Apple laptop sits on a podium with the Google logo during a Google special event in 2010 in San Francisco. Justin Sullivan/Getty Images
Listen Now

Part of the reason there’s a backlash against Big Tech these days is because some of these companies are so big. They’re big in terms of users (see: Facebook’s 2 billion plus), big in valuation (Amazon and Apple have both topped a trillion dollars), and big in market share (more than 90 percent of all web searches happen on Google).

The United States is taking baby steps toward possible regulation. Europe is taking more like Paul Bunyan-sized steps. But author and professor Tim Wu argues these companies should have been slowed down long ago. Marketplace Tech’s Molly Wood talked with Wu about his new book, “The Curse of Bigness: Antitrust in the New Gilded Age.” He says tech companies in particular were allowed to grow too big too fast. The following is an edited transcript of their conversation.

Tim Wu: They’re kind of like an overgrown baby that’s still in its swaddling clothes, or its crib, and being protected from the outside world. They have a series of laws that protect the tech industry in ways that other industries aren’t protected. And they’re also unregulated, unlike, let’s say, the telephone industry or banks, and that gives advantages as well.

Molly Wood: You talk about the failure of regulators to realize that, say, Instagram was a competitor to Facebook. And so I wonder how much of that was, like you said, a lack of regulatory will, an ongoing swaddling, if you will … or if it was actually just a misunderstanding of the technology and the potential?

Wu: I think a little bit of both. So I was in government during the campaigns where Facebook bought up much of its major competitors. Google bought up, frankly, hundreds of companies. And in government, it’s not that people didn’t understand the technology at all. But the business model — giving stuff away for free, competing for attention, losing money for many years in order to make money later — that all just didn’t really compute with a bunch of people who were used to looking for a kind of monopoly of the old fashioned, even Microsoft variety where you charged money, or Standard Oil controlling an actual product. So that I think was all sort of confusing. On the other hand, I do think that this crib effect was still there. It’s a new industry, exciting, they seemed full of really good people, so why not just let them buy up all rivals?

Wood: And how does this fit into, say, the Federal Trade Commission starting to have conversations about trying to overhaul antitrust regulations for the digital age? Is the Sherman Act going to cut it, or are they, in fact, just normal old monopolies?

Wu: I do think what a lot of people are realizing is you don’t necessarily need a whole new law designed to deal with them. You just have to accept that there are businesses. Maybe in some cases you have to understand that they’re interested in attention and not just money, but they turn attention into money. I think what we’re learning is some of the older principles really should still apply. Standard Oil’s basic method was to gain a monopoly by buying up all its most dangerous competitors. And that’s exactly what Facebook did. So I’m in the school that suggests the old principles, which call for the breakup of big monopolies have not gone out of date.

And here’s some of the other tech news we’re following: