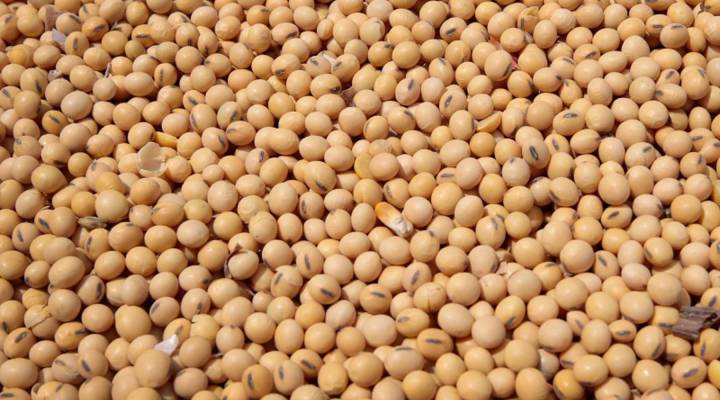 COPY
Soybeans are loaded onto a truck before delivery to a grain elevator in June in Dwight, Illinois.  Photo by Scott Olson/Getty Images

Soybeans are loaded onto a truck before delivery to a grain elevator in June in Dwight, Illinois.  Photo by Scott Olson/Getty Images
Listen Now

The biggest market for U.S. soybeans is all but closed, and that’s causing problems for American farmers.

The Chinese government imposed a tariff on American soybeans in response to U.S. duties on Chinese products, which translates into this stark statistic: U.S. soybean sales are down 94 percent from last year.

To complicate the situation, soybean yields in many parts of the country were higher than normal, which means storage bins were already filling up. The beans have nowhere to go.

The scene from Minnesota

“We got the soybeans out without the rot, but storage was definitely an issue,” he said.

Gordon said without the Chinese market, soybeans are piling up, and farmers are fighting for limited storage space.

“We lost that foreign market, so a lot of the elevators still had soybeans in them that would have been shipped out,” he said. “Without that market, our silos are filling up with soybeans.”

Gordon had an unusually low yield this year due to all the rain. As a result, he said he has enough space on his farm to store all of his soybeans. “But storage became a major issue in the country,” he said. “Our yields were lower, so it helped the elevators with storage that we didn’t have a normal crop.”

North Dakota farmer Bill Hejl said his soybeans are safely tucked away while he looks for a place to sell them, but some of his neighbors weren’t so lucky.

“I’ve seen soybeans in white plastic bags out in fields,” he said. “Those are the folks that are in danger. And there are soybeans that are being stored just in piles outside. And if they don’t find some place to go, pretty soon rain and snow will ruin those.”

Hejl is 64 and plans to retire next year. He’s leaving the farm to his son but worries about the long-term viability of the business. He thinks banks are going to stop offering critical loans. Soybean farmers need to assure lenders they can get an adequate price for their crop.

“They’re going to have to go in and talk about renewing their operating loan for next year,” he said. “I really wonder what price per bushel bankers are going to be able to use if there’s no light at the end of the tunnel on the soybean war.”

In a normal year, Mark Jackson would be ecstatic about the soybean yield he ended up with. He farms about 2,000 acres just outside of Oskaloosa, Iowa, about 60 miles southeast of Des Moines.

“Believe it or not, I had the historical crop,” Jackson said. “It was 25 percent above my average yield, which is virtually unheard of in soybeans, so gross dollars for me will be equal to what they were 2017.”

Jackson said he was able to sell about half of his beans before harvest, and, more importantly, he sold those beans before the Chinese countertariff on soybeans went into effect. He had enough storage space on his farm to store the remaining crop that hasn’t sold and said he’s also optimistic that there are other markets for his soybeans.

“I think Vietnam, for example. I read that they have increased their imports by 93 percent,” Jackson said. “Prior to the tariff, 60 percent of what the U.S. farmers grew was exported, and our commodity groups behind us, like the United Soybean Board and the American Soybean Association, each one of their goals and efforts to try to enhance and increase market share,” he said.

He’s optimistic the Trump administration will come to an agreement with the Chinese government and his soybeans will be welcome back in China soon. But he recognizes the need to be willing to adjust to market conditions as quickly as possible.

“It’s not my grandfather’s agriculture anymore,” Jackson said. “You need the ability to think and move and change continuously. We are everyone’s next meal, our water is your water, so it all becomes a conversation about sustainability, as well.”

Last year, the United States exported $26 billion in soybeans. More than half went to China.