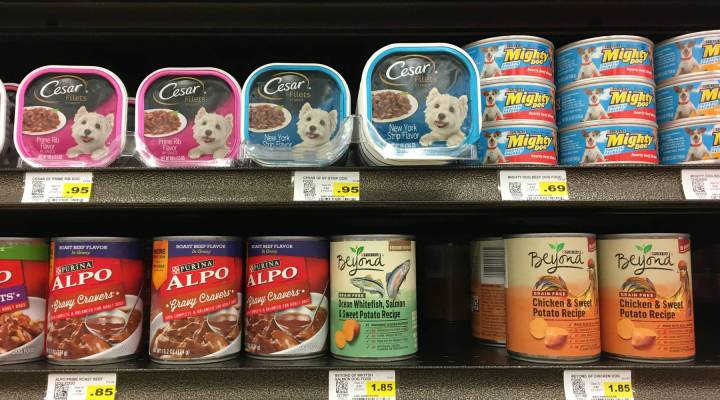 COPY
Purina offers canned dog food at different price points. Alpo costs 85 cents a can at a Kansas City grocery store, while the company’s premium product, Beyond, is $1.85. Peggy Lowe/KCUR

We love our pets — and love to spend money on them. Last year Americans spent nearly $70 billion on all things related to our animal companions — some $30 billion of that on food alone, according to the American Pet Products Association. And not just any food. Companies are cashing in on foodie trends in pet food.

Take Sarah Brock and her husband as an example. The Kansas City-area couple say they have two children. Their first arrived six years ago when they found Ruby, a mutt they adopted at a local rescue shelter.

They admit they had a hard time describing their new family member to some people, including Brock’s father, when they described Ruby as their “fur child.”

“About half of us view our pets as our children or our best friends,” said Lynn Dornblaser, director of innovation and insight for Mintel, a market research firm. “Which is very sweet and a little sad.”

Sarah Brock, in her Lee’s Summit, Missouri, home with her dog, Ruby, a 6-year-old mutt she and her husband rescued and call their “fur child.”

Dornblaser laughed as she said that. She counts her own cats as children and worries about them when she’s traveling, which 51 percent of us also do, according to her research.

Just like consumers who seek healthy food, pet owners want that kind of nourishment for Spot and Whiskers — food free of preservatives and high in a single ingredient, usually protein, Dornblaser said.

“You see companies talking about meat as the first ingredient or only whole grains or showing pictures of the kinds of meat and the fruits and the vegetables that are in that product,” she said.

During the last decade, demand for this premium pet food boosted sales dramatically. Nielsen, the consumer research company, reports that annual household spending on pet food increased 36 percent from 2007 through 2017.

Consumers are paying the price for the premium pet food, and companies are cashing in. For instance, Purina, the second-largest manufacturer of pet food in the U.S., offers different kinds of canned dog food at different price points. A can of Alpo was priced at 85 cents at a Kansas City grocery store, and its premium brand, Beyond, was being sold for $1.85 a can. Beyond is labeled as “grain-free” and “made with real chicken.”

“We’ve seen more of a shift away from ingredients that consumers don’t understand very well,” Dornblaser said. “So that means words that sound like scary chemicals.”

Steve Akins, executive vice president with Watt Global Media, which focuses on the animal food industry, said this high-end pet food trend is called “humanization.” That means treating the pet like a member of the family, he said.

“And it’s really a member of the family that can’t speak for themselves, and so we humanize what we think are their responses or the way they’re thinking,” Akins said.

As more of us feed our pets like humans, Fido and Fluffy might also be susceptible to one of our problems. The Association for Pet Obesity Prevention says an estimated 60 percent of cats and 56 percent of dogs are overweight in the United States.