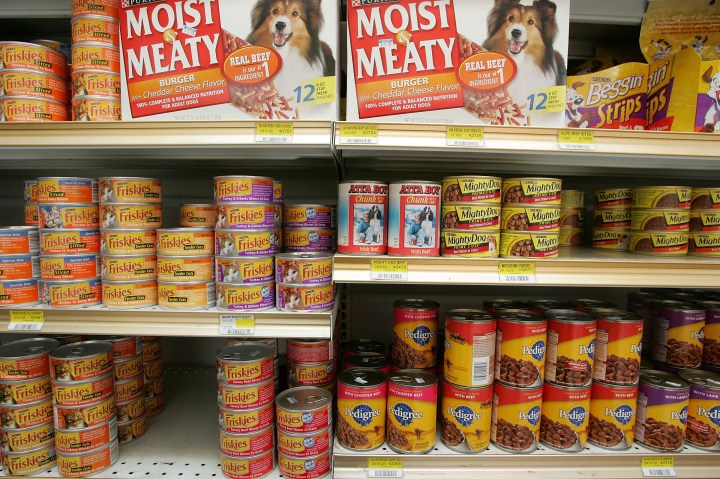 Cans of dog food are seen on the shelf at a grocery store April 12, 2007 in San Francisco, California. Photo by Justin Sullivan/Getty Images

Cans of dog food are seen on the shelf at a grocery store April 12, 2007 in San Francisco, California. Photo by Justin Sullivan/Getty Images

New pet food companies are springing up to meet what they say is growing demand for plant-based, sustainable alternatives to Fancy Feast and Kibbles ‘N Bits.

By making products from fermented fungus and experimenting with lab-grown food from animal cells and microbes, alternative pet food makers are hoping to carve out a share of the $30 billion U.S. pet food market.

And multibillion-dollar pet food companies, like Mars Petcare and Nestlé-owned Purina, are starting to take notice.

“Our mission is almost the exact same as Impossible Foods, which is [to] reduce or eliminate factory farming, which has this giant environmental footprint,” said Josh Errett, CFO of Because Animals, one of the companies developing new pet foods. “I mean, calling it a ‘footprint’ is too nice, it’s an environmental disaster.”

The other mission is to make a profit. These companies are catering to pet owners who value their ecological footprint and have the income to pay for an alternative product that tends to be more expensive than a can of Pedigree.

Pulling away from factory farming

A UCLA study from 2017 by professor Gregory Okin estimated that dog and cat food accounts for the release of millions of tons of the greenhouse gases methane and CO2 and constitutes “about 25%–30% of the environmental impacts from animal production in terms of the use of land, water, fossil fuel, phosphate and biocides.”

Like plant-based market leaders Impossible Foods and Beyond Meat, alternative pet food companies say their product will reduce the amount of land and energy used for conventional meat production.

Industrial animal farming, or concentrated animal feed operations, produce large amounts of byproducts and off-cuts — like organs and bone meal —  which are not usually used in human food, but are re-purposed for pet food production.

The goal is to cut factory farming out of the supply chain completely — without a market for the unused parts, the meat industry would collapse due to lost revenue, Errett said.

But many large pet food companies defend their use of animal byproducts.

“One might argue that this is actually a super sustainable source, because we’re using materials that most of us wouldn’t consume and would be wasted,” said Richard Butterwick, global nutrition advisor at the Waltham Petcare Science Institute, a research center for Mars Petcare.

Because Animals —  along with another company, Wild Earth — are using cellular technology to culture real meat from animal cells biopsied from living creatures. The cells are encouraged to proliferate and reproduce in a bioreactor, creating muscle protein without the need to slaughter animals. This process is also being used by more than 30 companies worldwide to develop “clean” or lab-grown meat for human consumption.

Next year, both Because Animals and Wild Earth hope to release their first cell-grown cat foods, made of cultured mouse meat.

“We’re getting back to what the cat’s system was built to digest,” Errett said. “You don’t have to add taurine or anything back, you can make an ancestral diet.”

A cat owner himself, Errett wanted to address the ultra-processed nature of a lot of the conventional cat food, or as he calls it “biological waste.” Cats are obligate carnivores, meaning they need to eat meat to get the 11 essential amino acids they require or they could have serious health problems like blindness or even death.

By culturing animal meat in a lab, these companies can genetically control what nutrients present in the food. They can also eliminate potentially dangerous substances that have made their way into some conventional pet foods. Some popular pet foods companies have had to recall their products in recent years due to toxic levels of Vitamin D and even the euthanasia drug sodium pentobarbital.

Will pet owners buy lab-grown mouse meat for their cats?

Beyond Meat increased its revenues by 250% between 2018 and 2019; consumers are taking an interest in the health and environmental benefits promoted by plant-based foods. Pet owners are showing that they will pay more for luxury and premium pet foods.

Wild Earth is making dog food from cultured fungi proteins and, according to CEO Ryan Bethencourt, revenue is growing steadily even though production is still relatively small.

This plant-based type of cultured pet food, already on the market, is much more expensive than the conventional options. A 18-pound bag of Wild Earth dog food sells for $49 on its website; whereas the website Chewy sells a 18.5-pound bag of Purina Dog Chow for $11.99.

Bethencourt said the potential for cultured protein could be 10% of the total pet food market within the next 10 years. He is using the success of plant-based proteins for humans as evidence for the market potential of alternative pet foods.

Research backs his point; according to one study from 2019, “it is clear that an association exists between the diet a pet owner has chosen to follow and the diet they choose to feed their pet.”

“There’s a lot more that isn’t known about growing mice cells to create meat. There’s just a lot more technical challenges that they have to figure out how to ramp up and replicate that kind of meat production,” said Rich Kelleman, CEO of Bond Pet Foods.

Bond is using the same approach to genetic engineering used to synthetically produce rennet for cheese production or insulin for diabetics.

“What we’re doing is isolating a skeletal muscle protein — so the building blocks of meat — and inserting the DNA from that into a microbe, and then using the machinery of the microbe to produce identical animal proteins that you get on a farm and field, drying it down and then using that in a broader recipe to provide high quality nutrition,” Kelleman said.

The major pet food companies are also looking for environmentally friendly, alternative proteins that could be inexpensive to scale up as a replacement for conventionally raised meat.

“One area we’re currently exploring is looking at insects as a potential protein source,” said Richard Butterwick at the Waltham Institute. “They are potentially much more sustainable than traditional mammalian sources of protein and potentially very nutritious, as well.”

Venture capital funds are eyeing the potential of cultured alternatives

Last year, Bond completed a $1.2 million seed round of funding and won a $10,000 innovation award from Purina.

Because Animals won this year’s innovation award and Wild Earth received a $200,000 investment from Mars Petcare during its 2018 investment round. So far, Wild Earth has raised over $16 million from various venture capital funds to pay for its continued growth.

These are relatively small amounts on the scale of the industry, but there is a sense of momentum.

“All the big pet food manufacturers are looking at their supply chain and they see challenges with the growth of the pet food market and the population overall, more people means more pets,” Kelleman said. “They’re looking for ways that they could mitigate the risk.”

Richard Butterwick said that the main concern is that a pet’s nutritional needs are understood by their owners. He said consumer trends and the humanization of pets should not compromise pet needs, just because there is a trend towards more sustainable eating for humans.

A 2015 study in the Journal of Animal Science looked at the changing attitudes of pet owners’ choice in food for their companions. The study said it was paramount that sustainability be weighed against animals’ nutritional demands.

That means conscientious pet owners need to be wary of compromising a pet’s health just because eating kogi fungus, cricket treats, or lab-grown meats is trending for humans.