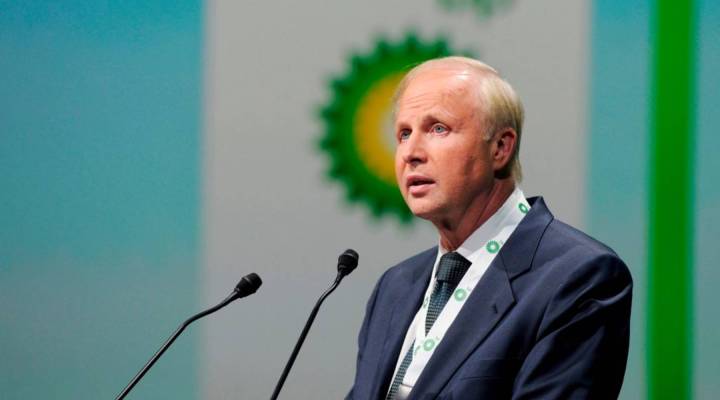 Two years ago oil prices collapsed. What followed was a recession, of sorts, in the oil and gas industry, along with communities tied directly to it. Today, the price of crude has bounced back from around $30 a barrel to roughly $70. While it appears that life for the energy industry is going well, there are still complications. Bob Dudley, the CEO of BP, talked with Marketplace Morning Report host David Brancaccio about the looming obstacles still facing the oil and gas industries.

David Brancaccio: Lots of stuff going on in your bailiwick: U.S. sanctions on Iran are going to kick in as the year goes on, the Islamic State’s return in Libya threatening production, Venezuela in economic crisis, we could list others. What’s your outlook? I mean, it seems like a lot of instability you’re dealing with…

Bob Dudley: I think it’s just what you said, the term would be “volatility” going forward here and it’s fairly near term volatility. Some of the things you mentioned are starting to play out in real time. For the middle of October into the middle of November in particular, Iran sanctions and how they play out will have a big effect up or down on the oil price right now.

Brancaccio: One of the stories we’ve covered in the last few days is that the European Union has just released what they think is a mechanism to pay Iran or get money out of Iran which might encourage some oil companies to do business with Iran despite U.S. sanctions. Might you take advantage of the new mechanism?

Dudley: I don’t think so, David. It’s countries like China, Japan [and] India, they can’t buy Iranian oil. But even if they wanted to and said they would — if some of those countries do — the insurance [and] the shipping, it’s all related to currency and transactions, I mean this could be quite a bottleneck. Without exemptions, I think we could see the price move up here. And if there are some exemptions granted we could see it move. That’s why volatility right now characterizes the market.

Brancaccio: A dominant story that we’re covering each day has to do with trade tensions. Tariffs. I remember early this summer, BP calculated that just the tariffs on steel and aluminum would cost you about $100 million which is a lot of money for me but perhaps not so much for you. But tariffs in general are affecting a lot of industries that use oil. What’s your view of these rising trade tensions?

Dudley: Well for us, we invest billions in the United States so $100 million is a lot. But in terms of the billions of investments we’re making, right now [we] keep an eye mainly on steel for the projects that we’re doing around the world. Others are affected more than us. I think how it would affect the world is really if these trade tariffs and tensions began to reduce global growth and then you see demand for energy drop and that would have a bigger effect on energy prices.

Brancaccio: And so it could play out that way in energy prices if demand is affected?

Dudley:  Not right away because demand is … the world is growing economically, so the demand is there and it’s growing and you’d see a slowdown somehow. I think there’s probably more upward pressures on energy prices right now for the reasons you mentioned, like Venezuela, Libya [and] Iran but it’s going to catch up. The world will catch up with energy production and these are cycles.

Dudley: BP does. What BP supports is a price on carbon. You can do that [with] either the carbon tax or you can do that with a cap and trade system. It doesn’t actually have to be global, it could be regional and then these markets come together. But we think that’s really the only way to put a price on a carbon atom and be able to recycle and use and have economic benefit for producers and consumers, it’s got to be part of the solution going forward.

Dudley: Yes and you can use the carbon dioxide, you can put it back in the ground [for] storage. There’s new products coming out with cement for example. Cement produces some of the most carbon dioxide in the world. So carbon capture has got to be part of this and without a price on carbon it’s going to be difficult. And people do need to know that there’s a cost when they push the switch on the wall to create electricity. It is not free.

Brancaccio: The Trump administration is a big fan of oil and gas. You know it’s possible that some listeners would conclude that should be music to your ears as boss of BP. But I wonder if the Trump administration’s pro-oil and pro-gas and pro-coal posture really helps you or does it get in the way of this longer term planning that you’ve been working on?

Dudley: Well it’s a global business. I think oil and gas companies are really turning into energy companies, I mean that’s the future of it. We’re involved in the electrification of vehicles as well, all the way through the chain. David, people talk about fossil fuels, good [or] bad. I actually think of it as a giant spectrum. Different kinds of natural gas, you get into different kinds of oils and then you get into coal and there’s a whole spectrum of burning coal and somehow the world is going to have to use this spectrum and it needs to be on the clean end of the spectrum with reduced emissions. So oil and gas, I know some people want it to go away tomorrow. There’s two billion people more on the planet by 2050, a billion people today don’t have access to electricity, we need to cut the emissions way down below half of what we have today. All forms of energy are going to be needed.

Brancaccio: It strikes me that U.S. sanctions on Russia must complicate your life almost personally. I remember you sit on the board of a Russian state owned energy company Rosneft. Isn’t it actually complicated for you to have that position given the sanctions?

Dudley: Well I’m very careful to avoid anything around the sanctions. I have great advice, I have to recuse myself from certain decisions. It’s a history —

Brancaccio: — you have to leave the room sometimes?

Dudley: Sometimes I do have to leave the room. I say I can’t be involved in that … not just me, there’s several of us. They understand that, they know that. We work with that company and I think we’re actually a force for good. We work with them on emissions reductions, corrosion, environmental work and real technical work to make it more efficient. It’s a serious, serious company. But we have to be really careful, the world is really complicated. That’s only one of many places.

Brancaccio: As we’re speaking, a barrel of oil traded in New York is above $70 a barrel. So are these the good times from your perspective?

Dudley: I think any industry, when you go through cycles up and down, it’s not good for long term planning and work. So as an industry we have to live through commodity cycles. I mean to me, you try to think about it as a middle of a cycle and right now I think we’re off the fairway on the higher —

Brancaccio: — on the high side?

Dudley: I think we are. The world can afford this. The world I think is going to struggle [at] $80, $90 to $100 [a barrel]. It’s really hard on producing countries around the world. I mean [oil price hiking] cripples countries and stability in various places so there is a right price in my mind of what the world can afford and use and transition, the energy transition, and I think we’re off the fairway a bit right now.

Brancaccio: A number of Junes ago, I remember reporting the price of a barrel of oil in New York trading was above $100. It was like $112 on this one day and then we were down in the upper 30s. It is a volatile business, I know that goes without saying, but this is what you’re grappling with every day.

Dudley: We do and so do the individual countries. The consuming countries and the price of oil is low, the price of gasoline goes down [and] people say “oh this is great.” On the other end of that chain is real poverty and potentially instability. Think about that from $114 [a barrel] in 2014 and then $27 [a barrel] I think it was by February the next year. Then it was lower for longer since then. And this is an industry that has to make some of the longest capital wavelength decisions about investing. So we’ve got to be disciplined, careful, never over exuberant, stay within a disciplined framework, or otherwise you’re just playing with luck.

Brancaccio: You’re focusing on these climate issues, isn’t that old school? That’s from the Paris Climate Agreement. We’ve moved on. The Trump administration is dragging the world in a different direction. Why are you still so focused on the green aspects here?

Dudley: We’re absolutely convinced [that] we’re in a multi-decade energy transition that’s very fundamental. The answers are going to lie in all forms of energy including renewable energy, combinations of renewable energy and natural gas. As a company we’ve got to sequester carbon…you can do it with products, you can do it with eliminating deforestation and preserving. All of these in combination are going to be the answer.

Natural gas to me has got to be more than a transition fuel if you can keep it from leaking, combine it, burn it efficiently. It’s got to be a big part of this. There’s a coal fire power plant being built every week in about seven countries in Asia. That’s the epicenter of climate. Nobody wants to talk about it very much and yet it’s cheap, affordable energy in those countries. That’s got to be part of this grand equation we’re in. But as a company who has been around for more than a century [and] would like to keep going, we’re not going to sit and stand still. So we’re working on all the technologies and the science and making real investments. BP just bought the first largest vehicle charging company in Britain.

Dudley: For electric cars. Combine it with other retailing liquid fuels, that’s going to be part of the business model as well.