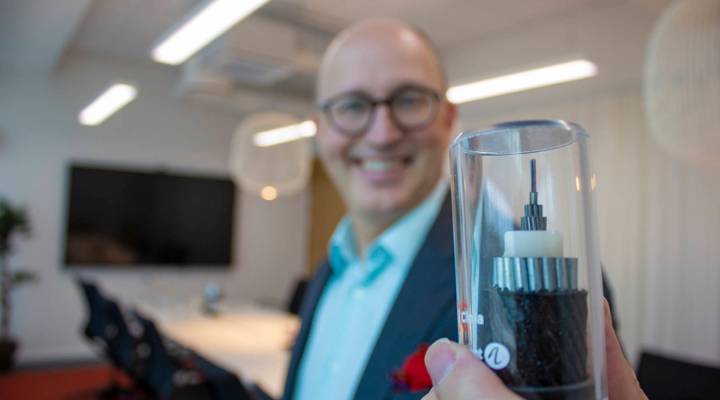 COPY
Jussi Pekka Joensuu, an adviser for Cinia, holds up a piece of internet sea cable at Cinia's offices in Helsinki. Most global internet communications travel on the 745,000 miles of sea cables buried beneath the ocean floor. Peter Balonon-Rosen/Marketplace
Marketplace Tech Blogs

Jussi Pekka Joensuu, an adviser for Cinia, holds up a piece of internet sea cable at Cinia's offices in Helsinki. Most global internet communications travel on the 745,000 miles of sea cables buried beneath the ocean floor. Peter Balonon-Rosen/Marketplace
Listen Now

Ever wonder how an email gets from a friend in Europe to your inbox? Or a Facebook message gets to you from a cousin in Asia?

The answer lies undersea. Most of the physical makeup of the internet — over 745,000 miles of fiber optic cables — snakes to and from continents, facilitating almost all of our global internet communications. In recent years, human communication has made up a smaller percentage of internet traffic than the data troves sent to and from internet-connected devices like smart speakers, smart thermostats and automated factories. And, just like roads get jammed with traffic, these information highways are starting to clog, too.

An ambitious initiative out of Finland is underway to solve this by laying a new route across the one body of water still largely untouched by sea cables: the Arctic Ocean. Melting sea ice presents an opportunity to lay digital links on a direct path between continents like never before.

Undersea cables themselves don’t look impressive. A single cable looks like thick black licorice the width of a tug-of-war rope. But these fiber optic cables surrounded by layers of armor make the internet work.

“This is like the backbone,” said Jukka-Pekka Joensuu, an adviser for Finnish government-owned telecommuications company Cinia.

Today, for data to get from Asia to Europe, it needs to travel where cables exist. Right now, that’s on thousands of miles of cable stretching down and around Asia, going up through the Suez Canal in Egypt and across the Mediterranean Sea.

“It’s about 253 milliseconds from Tokyo to Frankfurt,” Joensuu said.

That’s faster than the blink of an eye. But there’s a business case to make it even faster with a shorter cable route, through the Arctic, directly connecting Europe and Asia. Data and communication would travel between continents 30 percent faster, according to Joensuu. He’s working with Cinia to lay a 6,500-mile cable up and around the Arctic.

The banking sector, financial institutions and commercial market would certainly welcome faster connections. Traders rely on powerful computer programs to buy and sell securities at high velocities. Milliseconds could mean the difference between profit and loss. But there’s another beneficiary, too.

Our smart devices, smart cities and smart factories are fueled by data flowing across the world like never before. Today, there are nearly three times as many internet-connected devices as there are people on Earth. And internet traffic between Europe and Asia is expected triple in the next five years, potentially weighing down routes already nearing capacity.

Marjukka Vihavainen-Pitkänen, a senior adviser in the Finnish government who oversees international infrastructure projects, is angling to make Finland the digital gateway between the continents.

“The most important thing is that we already have an existing cable line coming through Finland,” Vihavainen–Pitkänen said. “And from Finland to Germany.”

As chair of the Arctic Council, the governing body of the Arctic, Finland has been pushing for increased global connectivity as part of its chairmanship agenda. The country has much to gain as the digital transit point between Europe and Asia. The development would further open up the country as an attractive place for companies to store digital data and provide an economic boon to areas of the country where cables meet land. Companies including Google already store data — and get free cooling — in Finland’s icy terrain.

Finland’s recent political feasibility study found that the governments of each country are on board for the cable and calls it a “win-win-win” situation for Europe, Russia and Asia. Now it just has to be built, at a cost of nearly a billion euros.

The frigid Arctic terrain comes with challenges. There’s a lot of  ice to navigate through with ice breaker ships to lay a cable route. Plus, there are the harsh weather conditions.

“You can go through it only during the real summer time which is not more than five months,” said Vihavainen-Pitkänen.

Internet and telecom companies from each country will pay for and manage construction. Of course, some of those companies, like Russia’s, are state owned. And global spy agencies often intercept communications on cables. So any security concerns?

“This is a very good question, and we of course are very much concerned about security issues,” Vihavainen-Pitkänen said.

But, she said, there are no project security specifics yet. A separate cable linking Tokyo and London via Alaska and Canada is already underway. For now, Vihavainen-Pitkänen’s focused on starting construction on this Arctic cable in 2019.

Correction (Oct. 3, 2018): The original version of this story misspelled Jukka-Pekka Joensuu’s name. The text has been corrected.