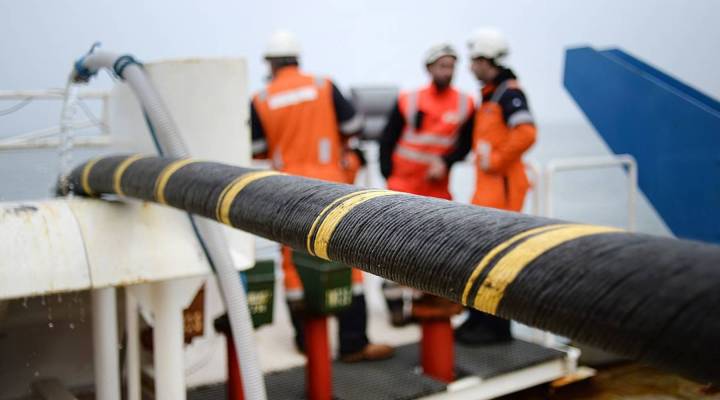 You can’t talk about the Internet these days without hearing endless mention of the cloud — the ethereal idea of our data floating invisibly over our heads. The reality, though, is that all of that data exists on hardware and much of it travels along cables that run along the ocean floor. That cable has traditionally been laid by telecom companies. Now, more content providers are getting into the game. Microsoft and Facebook have announced they’re cooperating to build one that’ll stretch from Virginia to Spain.

When you hear the official term “submarine cable”, it’s hard not to think of those sonar pings you see in something like “The Hunt for Red October.” While pings do give some data, there’s a lot more information traveling through those cables. It’s estimated that 99.8 percent of all intercontinental telecommunications go through those cables, and that amount is likely to swell.

“The Internet and the cloud is going to continue to grow and to transform the way we do everything, and that means you’ve got to have capacity,” said Jeff Kagan, a wireless and telecoms industry analyst.

For content providers, that’s a lot of capacity to have to buy from the cables’ owners, which have traditionally been telecom companies. That’s why more tech companies are starting to shell out hundreds of millions of dollars to lay cable of their own.

“In the long term, it’s cheaper for them to build a cable and provision it with their own equipment rather than constantly going to the third party market and purchasing capacity from other operators, from carriers,” said Tim Stronge, an analyst with TeleGeography.

Microsoft and Facebook are joining other tech giants in taking ownership of submarine cable. Two years ago, Google announced it would invest in the $300 million FASTER cable to span the Pacific Ocean.

“It’s a sign of a continuation of a fairly recent trend that we’ve been seeing with large Internet content providers,” Stronge said. “They have a huge and growing need for capacity for their own internal networks.

Stronge said the Marea cable will be sixth or seventh that content owners will have laid, and it’ll have the highest capacity across the Atlantic. One of the partners on the project, Telxius, is a telecom company. The others, Facebook and Microsoft aren’t. Some have questioned whether the effort to lay fiber optic cable along the sea floor represents a push by tech companies into the public utilities market. Stronge said, however, that is unlikely.

“We don’t see the large content providers becoming carriers,” Stronge said. “They’ve sworn up and down that they don’t want to do that, that that’s not their core business. And in fact, they have such large capacity needs — these content providers — that we believe that they will use all of the capacity that they’re procuring essentially for themselves.”

Neither Microsoft nor Facebook would give an interview for this story, but spokespeople for both confirmed the capacity would be for the companies themselves.

There are some risks to laying the cable. Stronge says there are on average two breaks a week in cable somewhere in the world. Things like anchors or fishing nets can damage them. There are even video of sharks biting cables.

Stronge said such risks can be mitigated by continuing to secure capacity along other cables.

“That way, if one cable breaks, they have failover into several other options,” Stronge said.