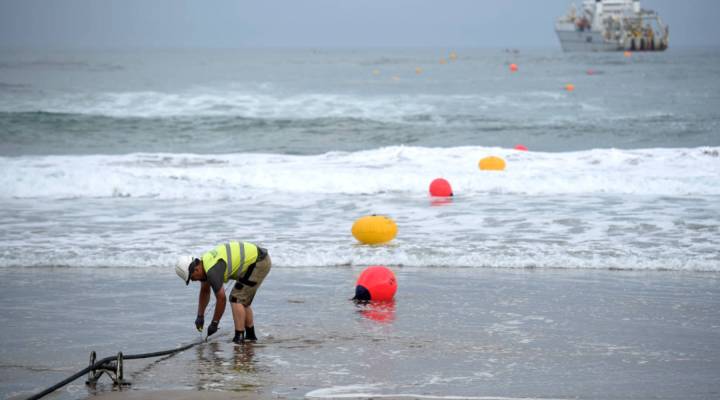 An operator works during the mooring of an undersea fiber optic cable at Arrietara beach near the Spanish Basque village of Sopelana in June. ANDER GILLENEA/AFP/Getty Images
Make Me Smart With Kai and Molly

An operator works during the mooring of an undersea fiber optic cable at Arrietara beach near the Spanish Basque village of Sopelana in June. ANDER GILLENEA/AFP/Getty Images

Molly Bloom spends a lot of time making kids smart on her science podcast “Brains On!” She’s a kindred spirit, so we had her on the show this week to answer our Make Me Smart question: What’s something you thought you knew but later learned you were completely wrong about? Bloom told us about an episode they did last year titled “How Does the Internet Get to Us?“

“I kind of imagined that satellites shot information to my phone and my computer, and I hadn’t thought very much about it,” she said. But that’s not true: “If you actually want to watch a movie from Netflix, there’s a cable coming from Netflix that at some point meets a cable coming from your internet service provider, and those cables meet at an exchange point.”

When former Sen. Ted Stevens called the internet “a series of tubes,” he was roundly mocked for making a confused argument against net neutrality. But his characterization of the internet’s infrastructure was mostly right. A decade later, for how much we talk about “the cloud” and tech companies’ grand plans for Wi-Fi blimps, it’s important to remember the internet is very physical.

“There are tubes beneath the ocean that connect London and New York. Tubes that connect Google and Facebook. There are buildings filled with tubes, and hundreds of thousands of miles of roads and railroad tracks, beside which lie buried tubes. Everything you do online travels through a tube,” Andrew Blum writes in his book about this infrastructure called — what else? — “Tubes.” “Inside those tubes (by and large) are glass fibers. Inside those fibers is light. Encoded in that light is, increasingly, us.”

You get online via an internet service provider — Marketplace headquarters in Los Angeles uses CenturyLink, for example — that internet service providers’s network talks to other networks via exchange points. They’re huge data centers located around the world. Some are remote, nondescript complexes that suck up massive amounts of water and power in rural areas. Others are located right under your nose: Blum talked with “Brains On!” about 60 Hudson Ave., the old Western Telegram building in lower Manhattan that houses one of the busiest data centers on the East Coast.

These data centers are so crucial, their owners are usually secretive about their functions or even their location. Amazon Web Services’ East Coast complex is in the CIA’s backyard, along with other data centers that collectively handle up to 70 percent of worldwide internet traffic.

When these data centers do open up, rarely, they reveal a kind of stark, sterile beauty. Artist Timo Arnall toured the Telefónica, data center in Alcalá, Spain, for a documentary project a few years ago.

But how does information travel from a data center in Virginia to one in Spain? Surely satellites can do the job? Not so. Undersea fiber optic cables span the Atlantic, and connect landmasses all over the world (here’s a map). One of those cables illustrates this story. Some of them are less than an inch thick, sitting miles below the surface on the ocean floor. At shallower depths, the cables have thick metal armor to protect them from passing ships. This article from Ars Technica is pretty complicated (and Eurocentric) but it gives a good overview.

Finally, if you’re interested in the way data moves through the physical internet, this tool lets you explore all far-flung places your information can surface.