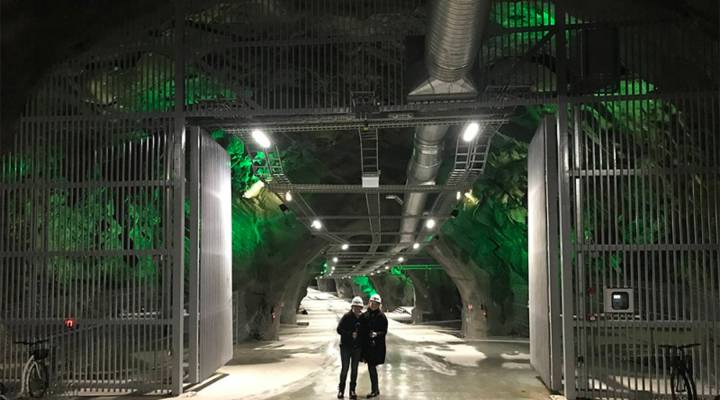 As more and more devices get connected to the internet — and as more people get devices to begin with — the need for data storage grows exponentially. The cloud doesn’t actually exist in the air. It lives on massive fleets of hard drives and servers. Where to situate this hardware is a strategic question.

You want a place that’s secure, has political stability and, if you’re a tech company that wants to look good, has lots of cheap renewable energy. That’s why Norway is making a big push to get companies to build data centers there. Microsoft announced plans for two Norwegian data centers last year.

Marketplace’s Jed Kim talked with Katie Prescott, a BBC journalist who reported on this from Norway. She traveled far north to visit a data center in a former mine. The following is an edited transcript of their conversation.

Jed Kim: Can you give me a sense of the scale of these data centers? What are we talking about, something like a warehouse?

Katie Prescott: I can only describe it as like a Norwegian fairytale. It was like the entrance to a troll’s cave inside a snowy mountain. We had to drive down into the data center a mile under the mountain into this old mine which they’d put servers in. It was totally bizarre to be in this tunnel of caves, and they described it as an underground town. It had this enormous boulevard down the middle, and then to the left and right were the servers. Because it was next to this fjord and under the ground, it meant they’re kept very cool and very safe. You’re unlikely to get many spies creeping around that part of Norway, and if you did, you’d probably notice them.

The Lefdal mine data center in Norway

Kim: The Norwegian government is incentivizing the construction of data centers with tax breaks. Why do they want these data centers so badly?

Prescott: They come with a lot of money. The other very exciting thing about data centers is, and I promise you can get excited about data centers, we need them so much. Ninety percent of all the data in the world was created in the last two years. Suddenly we need a space to put all these things. The Norwegian government is looking beyond the oil and gas that is currently the big driver of the economy there. They’re thinking, what’s going to be the next industry? And they’re looking at data, which is often called the new oil. They’re thinking, actually, perhaps that is the future.

Kim: Does Norway’s out-of-the-way location hinder putting in these other data centers there?

Prescott: In many ways, no, but it depends what sort of data you’re storing. If you’re putting Facebook photos, it’s fine. If you’re talking about data that we need to trade, for example, in financial services, it’s too far away. What’s called the latency, the distance that data has to travel, is too far. What I did think was really interesting while I was there, though, was I met someone who said, “Our next challenge is to dig fiber optic cables under the North Pole from Norway to Asia and the West Coast of America.” If you think about how data travels from Europe at the moment, it goes from side to side. They were saying, “If we can go under the North Pole, we can go direct and that’s going to increase the number of people who want to come to Norway to put their data centers here.” Because of the oil and gas industry, they said, “We’re used to dealing with the Arctic. The ice doesn’t bother us. Cables? We’re good at cables.”

Kim: Finland just built an undersea cable. Is Norway just trying to do the same thing?

Prescott: It’s funny you mentioned that. Scandinavian countries, traditionally, have massive rivalries. We’ve been talking about Norway, but also Finland, Sweden, all of the countries in that area are trying to attract data centers to come to their countries. Norway would argue, and I don’t want to sound like an advertising executive for the Norwegian government, but I did ask their trade minister this, and he said they are the only country with 100 percent renewable energy. Countries in the region have high levels of renewable energy but not 100 percent.

What’s making undersea fiber optic cables more of a possibility in the Arctic? Our friend climate change and melting Arctic ice. If Norway does go ahead with plans to route fiber optic lines through the North Pole, it will join just a couple projects in the works. You can read about the current state of subsea telecom in the Maritime Executive. The Arctic is attractive because it isn’t already crowded with cables, and there’s less risk of damage from, say, a fishing net or boat anchor.

Marketplace’s Peter Balonon-Rosen explained Finland’s plans to connect with Asia on Marketplace Tech last year. If you want a visual of what such a fiber optic line looks like, he got a picture of one. He described it like thick black licorice the width of a tug-of-war rope.

As Prescott pointed out, Norway’s interest in new data centers comes as it tries to get away from an oil-based economy. Norway’s also moving away from oil in its $1 trillion sovereign wealth fund. It’s looking to offload about $7.5 billion in shares in energy companies. Fossil fuels may have made the nation rich, but now they’re seen as a future financial risk. So where to invest that $7.5 billion? How about tech?