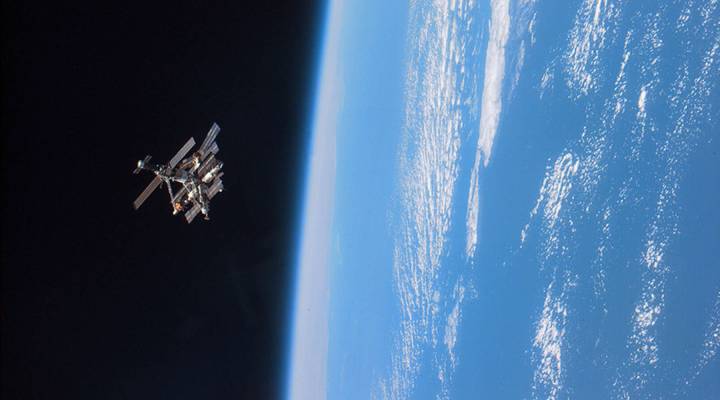 We all had a party on Twitter last week when NASA landed a new probe on Mars. But for people to land or live on Mars, they’ll have to survive in a hostile environment where you can’t just run to the hardware store for new tools … or a new satellite or new house. So some companies are trying to move manufacturing to space. NASA contracted with one company, called Made in Space, to use a 3D printer for making tools on the International Space Station. One day it may be able to “print” satellites in space. In-space manufacturing may also be used to create better earthbound products. Certain materials are easier to work with in microgravity, like fiber-optic cables that can develop flaws in regular gravity. If those cables are built in space and sent back home, they can flawlessly send things like internet transmissions much faster. Molly Wood talked with Andrew Rush, president and CEO of Made in Space. She asked him how important making stuff in space is to space exploration. The following is an edited transcript of their conversation.

Andrew Rush: I think on a scale of one to 10, 3D printing specifically — and in-space manufacturing more broadly — it’s an 11. It’s the bedrock technology that lets us go from doing sort of camping trips to space to going and staying.

Molly Wood: And I’m sure everybody kind of gets this, and the camping analogy is a good one, but why? Why do we need to manufacture in space?

Rush: Space is an incredible resource both from an energy production perspective as well as from the perspective of being able to manufacturer really new and transformational products. A lot of the work that we do at Made in Space is focused on actually manufacturing and assembling satellites in the operational environment of space rather than building them and then sort of origami folding them up on a satellite and launching that to space, because there you’re just designing sort of like to survive the delivery mechanism to space rather than building something to be optimized for where it’s actually functioning.

Wood: I mean, I would assume just taking the kind of rocket trip off the back end of any manufacturing makes things a lot more affordable. Right? Is this also more economical, or is 3D printing in space just as expensive as making things on the ground?

Rush: So being able to manufacture things in space, we can make things that are 50, 70, 90 percent less massive. If in the extreme cases where you’re only like a 10th of the mass and you know it costs a couple of thousand bucks a kilogram to send stuff to space, that can be a substantial amount of money that you’re saving.

Wood: Is this like the fifth industrial revolution? At what scale do you see this eventually stretching out?

Rush: I firmly believe that we know that we don’t know the breadth and the scope of the impact of really utilizing space. We really don’t understand the impact that that’s going to have on the U.S. economy and the global economy and our ability as humans to do really cool stuff. I think that this is going to have an impact akin to like the e-commerce revolution on society, eventually that when you start really leveraging this, it’s going to have these impacts that we just can’t even really identify right now.