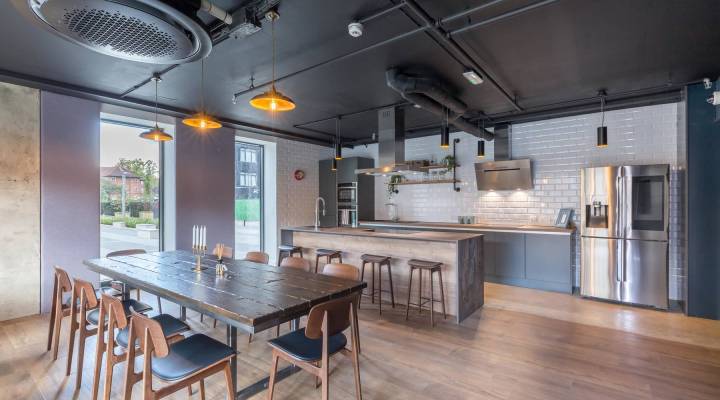 COPY
Tipi is among several property companies capitalizing on the rent-for-longer issue fueling a pre-existing housing shortage in Britain’s capital. The company is in the process of constructing a large-scale campus with dozens of buildings that will add 7,500 new rental units to the market. This photo from Tipi shows a prospective look at an apartment space.   Courtesy of Tipi

Tipi is among several property companies capitalizing on the rent-for-longer issue fueling a pre-existing housing shortage in Britain’s capital. The company is in the process of constructing a large-scale campus with dozens of buildings that will add 7,500 new rental units to the market. This photo from Tipi shows a prospective look at an apartment space.   Courtesy of Tipi
Listen Now

It’s been a decade since the collapse of investment bank Lehman Brothers sent shockwaves through the global financial system. While many aspects of the global economy are on more solid footing 10 years later, aftershocks are still reverberating in various sectors.

The economic downturn and subsequent emergency action from central banks all over the world created a perfect storm for younger generations who thought they’d be able to climb the rungs of the housing ladder. They’re now widely referred to as “Generation Rent” because, especially in large cities, they’re forced to continue paying rent rather than purchasing their own homes.

Cutting rates to historic lows was one part of a series of emergency measures central banks deployed in the depths of the financial crisis. Those actions served their intended purpose of helping stabilize economies all around the world and stem sharp declines in housing prices. It also allowed those who could afford to take on a new mortgage to snap up properties for a lower cost. But, along with other factors, that caused supply to dwindle, ultimately pushing prices higher and out of reach for younger buyers in many areas.

“It is more difficult to borrow a very large amount relative to your income and certainly relative to the price of a house [now] than before the crisis,” said David Miles, a professor at Imperial College Business School and former member of the Bank of England’s Monetary Policy Committee during the crisis.

“It is harder for young people to get onto the housing ladder at least early in their life. It used to be the case that people could buy a house in their late 20s or early 30s. That’s been pushed back now to mid-to-late 30s,” he said.

Think tank Resolution Foundation reports that 40 percent of millennials  – those born between 1981 and 1996 – continues to rent at 30 years old. That’s double the rate for Generation X before them and four times that of the baby boomer generation. What’s more, Resolution Foundation predicts that half of millennials could still be renting by their 40s, with a third of them still renting by the time they reach retirement age.

In the United States, the rental population has increased by more than a quarter over 10 years, while the number of homeowners has remained virtually unchanged, according to an analysis using census data from Rent Café.

It’s all statistics that Tim Jarman, a 36-year-old living in London, is all too familiar with. As a result, he’s put his dream of owning a home on ice.

“It’s probably a much longer-term [goal],” he said. “Many friends that have tried to get on the housing ladder because everything in London is so expensive, they’ve ended up settling for places they wouldn’t choose to live in area wise. But they felt that was the only way they could get on the housing ladder. And then they’re stuck there for a while before they can move somewhere else.”

Jarman said his friends’ experiences have turned him off from getting out of the rental market because he’d much rather enjoy where he’s living.

Property developers are already capitalizing on this trend. In London, Tipi has sought to capitalize on the rent-for-longer problem that’s exacerbated a pre-existing housing shortage in Britain’s capital – another reason for soaring real estate prices. The company is in the process of constructing a large-scale campus with dozens of buildings that will add 7,500 new rental units to the market.

An advertisement from Tipi, which is among several property companies attempting to reach a generation of potential renters.

It lures potential tenants with zero fees or down payments, coordinated social events, a 24-hour on-site concierge service, monthly prize drawings, and other amenities. It also doesn’t hurt that Wembley Stadium, where the country’s soccer teams play and concerts and events are frequently held, is just steps away from the rental properties.

It’s one of many co-living concepts that take advantage of the so-called rental revolution around the world. Also in London is The Collective, and in the U.S., there’s Ollie, with locations in New York, Pittsburgh, Los Angeles and Boston. Professionals looking for a similar housing concept that groups them with others in their industries are also popping up in other parts of the world, including Indonesia, Poland and Norway.

These concepts are certainly a new niche in the rental market, but are they really causing rental revolution, as Tipi’s ads proclaim? And is it the a sign of more permanent change in the housing market structure? David Miles said as long as the rental market works well, there’s plenty of property, and it gives people what they want, there’s no obvious reason why renting a little longer in life is harmful.

“If you can develop rental options which are more attractive for people to stay in for a longer period so they don’t consider it a sign of failure to stay in the rental sector at 32 or 35 years of age, then that’s probably a healthy thing,” Miles said.

Still, those who don’t mount the homeownership ladder until later in life delay building equity in their investment, which ultimately adds to their total wealth. Federal Reserve data show that between 2013 and 2016, the median net worth of U.S. homeowners grew 15 percent to $231,000, while that of renters fell 5 percent to $5,200. The Fed says much of the gain for homeowners comes from higher home prices — which, according to Federal Housing Finance Association data, rose roughly 20 percent over the same period.

Despite that, while Jarmon would one day like to buy a home, he said he’s still happy to stay put in the rental market if it means higher quality of life for him and his partner.