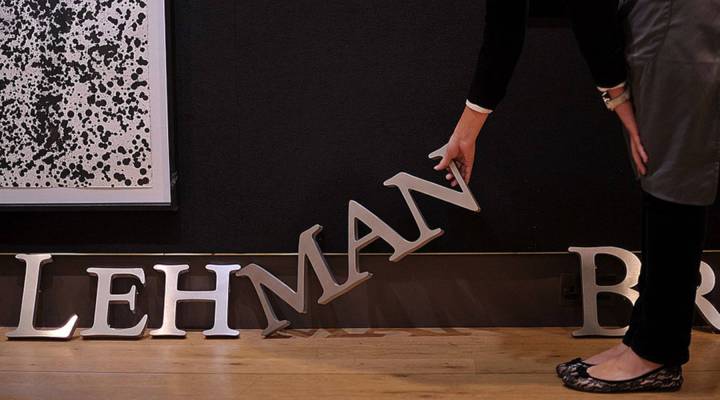 COPY
An employee poses with part of a Lehman Brothers sign at Christie's auction house in London in 2010. BEN STANSALL/AFP/Getty Images
Divided Decade

An employee poses with part of a Lehman Brothers sign at Christie's auction house in London in 2010. BEN STANSALL/AFP/Getty Images
Listen Now

The great unwinding of Lehman Brothers, the investment bank that collapsed 10 years ago this week, kicked off in a Manhattan courtroom on a Friday afternoon, less than a week after the firm first filed for bankruptcy.

“It was probably the single-most dramatic bankruptcy hearing in history,” said James Peck, a former bankruptcy judge who presided over the hearing and is now with the law firm Morrison & Foerster. “It sounds like an exaggeration, but it’s not.”

At question was whether to allow the sale of Lehman’s headquarters and its core business to Barclays — its broker-dealer — that traded stocks, provided advice on mergers and assisted companies in going public.

“There was the sense that if this sale didn’t go through, what was already horrible would just get much worse,” Peck said.

The sale would provide some market stability: It would create continuity for customers and save some 10,000 Lehman jobs.

But the deal had been proposed just a few days earlier.

“A question was whether something this massive and complicated could be approved on such short notice,” Peck said.

The hearing started at 4 p.m. Finally, after midnight, the judge approved the sale.

“Believe it or not, people stood up and applauded,” he recalled.

That dramatic hearing was just the start. At the time of its collapse, Lehman was the country’s fourth-largest investment bank. Though insolvent, it still had more than $600 billion in assets and operations all over the world.

After the sale, many of the employees who understood what those assets were and how the firm’s systems worked were transferred to Barclays.

Plus, Lehman’s failure triggered roughly 80 bankruptcy proceedings involving hundreds of its subsidiaries in 16 different jurisdictions around the world, as well as a feeding frenzy among those subsidiaries as each tried to retain as many assets as it could.

“The claims were all very complicated, and there was no ultimate Supreme Court of Lehman to decide right and wrong,” Peck said.

The U.S. business split into two separate bankruptcies. The first was Lehman’s holding company, its parent company. Creditors ultimately filed more than a trillion dollars in claims against it. The second was what remained of the broker-dealer after its sale to Barclays.

The first priority there?

“Quite simple, questions. How many customers were there? What were they owed? Where were the assets? How would we return them?” said Christopher Kiplok, who chairs the bankruptcy practice at the law firm Hughes Hubbard & Reed and has been working on the broker-dealer bankruptcy since the beginning.

Lehman’s customers ranged from giant hedge funds to a grandparent investing for college. Eventually, all their assets were returned to them.

Then there were the creditors, figuring out who they were, if their claims were valid and in what order they had to be paid.

At its peak, Kiplok said the wind down of just the broker-dealer involved some 700 people, including accountants, forensic accountants, financial consultants, investment bankers and a large team of lawyers.

The estate also had to chase down and collect what Lehman was owed when it failed.

For example, more than 100,000 hours went to collecting $4.5 billion that Lehman would have collected from trading partners in the normal course of business, had it not filed for bankruptcy.

The estate also had to oversee and eventually sell the securities and other assets Lehman owned.

“We had a majority stake in a prison company we had to sell,” Kiplok said. “Everything from a shipping company to derivatives that we’d have to talk to a Ph.D. economist to explain to us why they’re even worth anything.”

Now, 10 years later, both the holding company and the broker-dealer are nearing the end of the wind down. The estates have worked through the vast majority of claims. Of the $1.2 trillion of claims originally filed against the holding company, all but $4.1 billion have been resolved. It has returned nearly $125 billion to creditors thus far; the broker-dealer has returned another $120 billion to its customers and creditors.

But some people are still waiting, hoping to get money out of Lehman’s estate.

One of the last big claims outstanding against the broker-dealer involves some 350 former Lehman executives who bought into a deferred compensation plan in the 1980s, investing some of their paychecks for retirement.

“This was in lieu of a pension because Lehman had a very penurious pension,” said Ed McGuinn, a former Lehman managing director in charge of international fixed income.

He and the other members of his group are still hoping to collect. They’re appealing a court decision that put their claim behind a long list of other creditors. His lawyer said the case could take another few years to resolve.