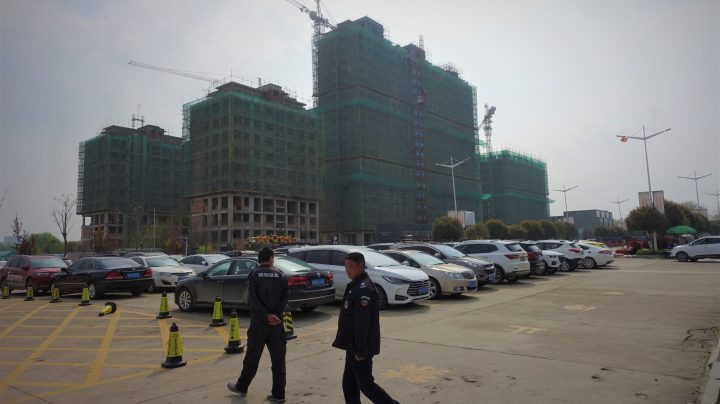 COPY
Evergrande could manage its debt while real estate values climbed, but in many places sales have weakened and regulators have made it harder for developers to borrow. Charles Zhang/Marketplace

Evergrande could manage its debt while real estate values climbed, but in many places sales have weakened and regulators have made it harder for developers to borrow. Charles Zhang/Marketplace
Listen Now

China’s property giant Evergrande is due to pay $84 million in interest on its bonds denominated in U.S. dollars on Thursday. That’s a tiny portion of the company’s overall debts, which amount to $300 billion.

Though there is very little direct tie to the American financial market, there are fears that Evergrande could be China’s version of a Lehman Brothers crisis and impact the global economy.

Evergrande is among the top three developers in China. It got there by borrowing — a lot.

“So, many people had believed that somehow Evergrande could walk out on their debt problem without a huge risk,” said Wang Dan, Hang Seng Bank’s chief economist for China.

That’s because real estate prices seemed to go up endlessly, according to economist Yi Xianrong. Then came a series of shocks.

“Evergrande has 1,300 projects in 280 cities,” Yi said. “Most of them are in smaller cities, and sales in these places have been dropping. At the same time, local governments didn’t allow housing prices to decrease to attract more buyers.”

Meanwhile, Chinese regulators have made it much tougher for developers, like Evergrande, to borrow. The firm doesn’t have enough cash to repay its loans or pay construction workers to finish some 600,000 apartments — and they’re already sold.

“And these are housing for about 2 million people. Many of those buyers are just ordinary people who borrowed mortgages, and their parents supported or their relatives supported,” Wang said.

Evergrande also owes investors who bought its wealth management products, including its own employees, like Liu Yunting.

Liu told a local television station that he was pressured by the company to invest to keep the firm afloat. “I invested $77,000. My parents and my in-laws together put in $200,000,” he said.

Investors and homebuyers have held small protests at Evergrande offices. But this is not a Lehman Brothers-type crisis, Wang said.

“If the government has to go the extra mile to stabilize the society — in this case, those homebuyers — they would totally do so,” she said.

Overseas bondholders, however, might be at the bottom of the Chinese government’s priorities.